The Girandoni Air Rifle -- Something From The Gods 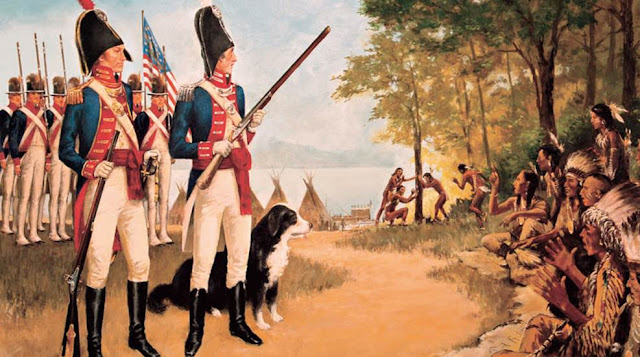 I was very surprised when I was handed an air rifle that a friend showed me the other day. Besides showing me how out of the loop I've become when it comes to modern technology and guns, especially air guns, I was extremely impressed by what I saw.

My friend showed me his .50 caliber Umarex Hammer air rifle. And no, the Umarex Hammer is not just another air rifle. It is high-tech, ingenious, and has a very large .510 caliber barrel. But, unlike firearms that use gunpowder, its use of compressed air puts out 3,000 psi behind its projectiles. This innovative, patent-pending system has the capability to propel a .510 caliber 550-grain lead slug at a muzzle velocity of 760 feet per second and a 250-grain slug at over 1,000 feet per second.
While I did not fire it, I was told that its recoil is more like a strong push instead of a kick as would be expected from a long bore rifle. And really, for a "big-bore air rifle designed for hunting big game," that's all very impressive. Of course, the very modern Umarex Hammer air rifle isn't the same as the Benjamin air rifle that my grandpa gave me when I was a kid. And no, it's surely not the .46 caliber Girandoni air rifle.
So what was the Girandoni air rifle?

Using fairly large calibers, pneumatic weapons are said to have been used in Europe by the very wealthy to hunt large game such as wild boar, deer, and even bear back in the 1700s. By 1780, an Austrian gunsmith named Bartolomeo Girandoni developed a revolutionary air rifle in .46 caliber.

Those features were why the Girandoni air rifle was adopted by the Austrian military. One feature is the use of a tubular magazine. In fact, it was one of the first rifles to use a tubular magazine. And with that, it was able to be loaded with 22 lead rifle balls that were propelled out of the weapon individually by controlling each burst of compressed air.

So yes, believe it or not, the Girandoni air rifle is considered one of the first "repeating rifles" invented. It was used in the Austrian military from the 1780s to 1810. And that makes it the first "repeating rifle" used in military service. With the 22 lead rifle balls fed into a tubular magazine built alongside the barrel of the weapon, these rifle balls were loaded into the weapon individually by a simple steel block. The block slid back and forth at the base of the breach. As a shooter held the muzzle of the weapon upright as the bullets rolled down toward the breach, the rifle balls were fed into the breach using gravity. This also meant that a shooter could actually lie on the ground and simply hold the weapon up vertically to reload. No, he didn't have to stand.

And think about this, during a period when a contemporary musket was considered accurate to only about 50 yards, the Girandoni air rifle and its muzzle velocity of 1,000 feet per second could put a lead ball through a one-inch pine board at 100 yards. And remember, since it was a "repeater," its full tubular magazine could be completely fired in less than 30 seconds.

There is something else. Unlike muskets that produced a great deal of smoke, the Girandoni air rifle shots produced no dense smoke. That means the rifle used on the battlefield would not lend to the gunpowder fog that obscured battlefields of the time. And also, since it was an air rifle and did not have the explosive report of a musket, the position of a soldier using the Girandoni air rifle was not exposed to enemy fire. Of course, one of the features that endeared the rifle to shooters was the fact that the rifle was also limited by rain. After all, let's remember that rain makes gunpowder ineffective when using a musket.

Sounds great? Well, even with all of those positives, believe it or not, it was not the perfect weapon because of what it took to operate. Let's remember, those were the days when it took about 1,500 strokes of a hand-operated air pump to fill each air canister. As for its military use, this meant that wheeled air pump carts were placed behind the lines. Along with this, specially trained gunsmiths were a necessity. In fact, I read where the military needed one gunsmith for every 100 riflemen equipped with the Girandoni air rifle just to keep those rifles in operation. And since they needed specialized spare parts such as mainsprings, replacement seals, and extra air flasks, they became a pain to maintain.

Think about this. In a time with soldiers were mostly uneducated peasants who couldn't read nevertheless have an understanding of technology, they were responsible for keeping the Girandoni air rifles in working order. And yes, it's said they were very difficult to keep in operation. Mechanical problems and seal leaks plagued the air rifles and the troops at the time were not capable of fixing them. So all in all, it is said that despite the deadly accuracy and firepower provided by the Girandoni air rifle, it proved to be technological that was too far ahead of its time. Because of problems pertaining to maintaining them, by 1810, the Girandoni air rifle had been entirely phased out of the Austrian military.

What did the Austrian military do with all of their surplus Girandoni air rifles? Well, it is said that a few were saved as museum pieces. Many were sold to civilians by the Austrian government. The military gave some to militias. Many were lost or destroyed. And then there is that one that history tells us made it across the Atlantic Ocean to a brand new country known as the United States of America.

Of course, when most of us think about Mountain Men and expeditions to explore America, we don't usually think of air rifles. We might think about Kentucky and Pennsylvania long rifles, but the Girandoni air rifle is not what usually comes to mind. And no, it's surely not the .46 caliber Girandoni air rifle that Lewis and Clark took along with them on their 1803 expedition. Yes, even if most believe that it was in effect the secret weapon that enabled the Lewis and Clark expedition to accomplish its mission.

As most know, the Lewis and Clark Expedition took place from 1804 to 1806. It was the first overland expedition from the East of the United States to the Pacific coast and back. President Thomas Jefferson commissioned the expedition shortly after the Louisiana Purchase in 1803. Its official mission, the expedition was to explore and to map the newly acquired territory, to find a practical route across the western half of the continent, and to establish an American presence in this territory before European powers attempted to establish claims in the region.
It did in fact have a secondary objective which was both scientific and economic. That meant that the expedition was to study the area's plants, animal life, geography, natural resources, and to establish trade with local Indian tribes. Initiated by President Thomas Jefferson, he hand-picked U.S. Army Capt. Meriwether Lewis to lead the expedition. Captain Lewis picked Second Lieutenant William Clark as his second in command.
The Lewis and Clark Expedition had about 40 soldiers who were all skilled in various trades. The unit was designated a Corps of Discovery and all were volunteers. They left St. Louis in 1804 and traveled up the Missouri River into present-day North Dakota. From there they sketched and documented everything imaginable about what took place and who they came in contact with during their exploration through the new Louisiana Purchase.
After wintering in present-day North Dakota, they left the next spring. To assist them, they hired Toussaint Charbonneau and his Indian wife, Sacagawea, who served as guide and interpreter. It is said that they "traveled through Montana and by horse over the Continental Divide to the headwaters of the Clearwater River. They built canoes to carry them to the Snake River and then to the mouth of the Columbia River, where they built Fort Clatsop (later Astoria, Ore.) and spent the winter. On the journey back the group divided, then reunited to canoe down the Missouri River to St. Louis."
They returned to a great celebration in September 1806. All but one member of the expedition survived. The journals kept by Lewis and others documented Indian tribes, wildlife, and geography and did much to dispel the myth of an easy water route to the Pacific.
Before leaving, it is believed that Captain Meriwether Lewis obtained his Girandoni air rifle between May and June of 1803 at a supply house outside of Philadelphia. The story goes that Capt. Lewis was headed to Pittsburgh when he found the air rifle in a shop. As for how it arrived there, no one knows for sure. It is possible that it was one of the surplus rifles that had been phased out of the Austrian military. But really, no one knows for sure.
We do know that on the very first page of Capt. Lewis' personal journal, he recounts how he took every opportunity to demonstrate his Girandoni air rifle's capabilities to the Indians that he encountered. He wrote, "The Indians considered the rifle something from the gods."

For that Girandoni air rifle, it came into its own whenever a new tribe was encountered. In fact, it's said that Lewis and Clark would stage an extravagant entrance all meant to impress the local tribe. And if you don't think it was extravagant, think again. All of the party were said to have "donned their most colorful military uniforms." With their frock coats, shined swords, formal headgear, polished muskets, and gleaming bayonets, all with flags blowing in the wind while fifes played, they would march boldly into each meeting with a new tribe. The explorers greeted the assembled tribesmen with formal gravity and then proceeded to hand out gifts such as bolts of colored cloth, beads, and commemorative medallions.

If you think that such pomp and ceremony would help to dissuade potentially hostile actions by a tribe, that was what they were betting on while trying to do their utmost to impress the tribesmen. Of course, it was during this time that Capt. Lewis would produce and confidently demonstrate the remarkable power of his Girandoni air rifle.

One member of the Lewis and Clark party was Private Joseph Whitehouse. In his journal, the Private described how Capt. Lewis demonstrated his rifle. That took place on August 30, 1803, at a Yankton Sioux village located along the Calumet Bluffs of the Missouri River.

Pvt. Whitehouse wrote, "Captain Lewis took his Air Gun and shot her off, and by the Interpreter, told them that there was medicine in her, and that she could do very great execution. They all stood amazed at this curiosity; Captain Lewis discharged was done the Air Gun several times, and the Indians ran hastily to see the holes that the Balls had made which was discharged from it. At finding the Balls had entered the Tree, they shouted aloud at the sight and the Execution that surprised them exceedingly.”

During the expedition, Capt. Lewis repeated this demonstration for every tribe the group encountered. And yes, there are 39 separate entries in the expedition's journals noting the Girandoni air rifle leaving all there amazed at the power that those men possessed.

Capt. Lewis' Girandoni air rifle played a major role in what can be considered a pivotal period of American history. And while that rifle was initially thought lost to history, it was discovered and today is on display at the Pentagon.