The Day Wyatt Earp Was Knocked Out With Single Punch 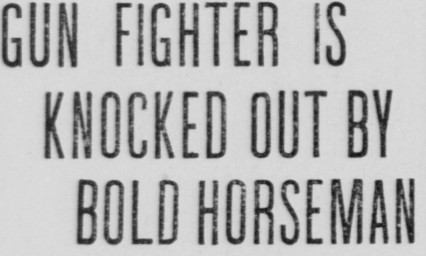 GUN FIGHTER IS KNOCKED OUT BY BOLD HORSEMAN

Wyatt Earp Floored by a Single Blow From Tom Mulqueen.

Engaged in a Saloon Row Over the Recent Turf Scandal and the Gambler Gets the Worst of It.
Wyatt Earp, gunfighter and all-around bad-man, was knocked down and out late Saturday night by Tom Mulqueen, the well-known racehorse man.
The trouble occurred in a Market street resort, near Stockton street, and was precipitated by Earp. Both men had been drinking at the bar, when Earp brought up the subject of the recent scandal at the Tanforan track. He made several disparaging remarks about a jockey who is on very friendly terms with Mulqueen.
When called down he became belligerently indignant and threatened to wipe the floor with the horse owner. Instantly Mulqueen grabbed him and after throwing him against the bar landed a blow on the gunfighter's face, knocking him out.
John Farley, the proprietor of the saloon, fearing serious trouble between the two men, managed to induce Mulqueen to leave the place. Earp, after recovering from the effects of the blow, was also led from the saloon and placed aboard a passing streetcar. Earp was not armed at the time, having left his trusted "gun" with a friend shortly before the occurrence.
Mulqueen was around as usual yesterday but refused to discuss the affair. He gained considerable notoriety several years ago by calling down Bob Fitzsiminons, the prize-fighter. They were in a saloon drinking, when the ex-champion referred to Jim Corbett as a looking-glass fighter. Mulqueen promptly resented the remark and threatened to break Fitzsimmnns' head if he repeated it.
Fitzsimmons, scenting trouble, left the place, not caring to mix it with the plucky horseman. Earp first came into prominence in this city when he officiated as referee in the fight between Fitzsimmons and Sharkey several years ago and gave the decision to the sailor on an alleged foul after he had been knocked out, a decision that created general dissatisfaction.
--- end of the article as published in the San Francisco Call, Volume 87, Number 161, 30 April 1900.

This incident above is not spoken of too often by Wyatt Earp historians who make all sorts of excuses for Earp's shady character. Besides their claims of him being the bravest of the brave, fearless, bold, unafraid at the 30-second gunfight that he's famous for today, his fans claim he was as honest, a champion pugilist, a fist-fighter who never lost, and contend that Earp never drank -- and was never known to be drunk. But that Hollywood myth doesn't hold water when looking at a couple of well-known incidents when he was drinking, was noted to be obnoxious, and paid the price for it.

The above incident where he got his clock cleaned by a single punch from a racehorse owner made the newspapers because he was, just a few years earlier, found to have been part of a plan to fix the Fitzsimmons versus Sharkey Heavyweight Championship boxing match. Wyatt Earp was the referee who awarded the fight to Sharkey after Fitzsimmons knocked Sharkey to the mat.

Earp ruled that Fitzsimmons hit Sharkey below the belt, but no one witnessed the supposed foul. The fans at the December 2, 1896 fight in San Francisco booed Earp and some called for a rope, especially since Earp made the call and then skedaddled out of the ring and out an exit before anyone knew that he ran off. It was Wyatt Earp's involvement in the match between Bob Fitzsimmons and Tom Sharkey, and the investigation afterward, that made Earp infamous from coast to coast. It was after that that he was seen as a notorious individual who was anything but honest.

Of course, a couple of years before he was involved with fixing a fight or when Earp was knocked out by Tom Mulqueen, there was an incident that embarrassed him. That took place one day when he was drinking heavily in a saloon in Alaska. Witnesses say Earp was bragging about how he was a bad hombre in Arizona. He is said to have drawn a pistol with some speed, and said, "That's how it's done down Arizona way!"

Nearby was U.S. Marshal Albert Lowe. He stepped in, slapped Earp, and disarmed him. Then, according to witnesses, Marshal Lowe supposedly told Earp, "That's how we do it in Alaska!"

According to one eyewitness, "U.S. Marshal Albert Lowe took his (Earp's) gun away, slapped his face, and told him to go home and go to bed or he would run him in."

Another eyewitness said, "Wyatt got a drink or two too much and got the idea he was a bad man from Arizona and was going to pull some rough stuff when U.S. Marshal Albert Lowe slapped his face and took his gun away from him."

U.S. Marshal Albert Lowe told Earp that he was checking his pistol in at his office and could pick it up in the morning. Wyatt Earp was in Alaska off-and-on for four years. He did not stay during the rough winter months, instead always traveled south to California for the winter -- where he worked on his autobiography.

As I've said before, after years of reading about Wyatt Earp, I really believe that he was a lot like a lot of those who self-promoted themselves as being badest of the bad. Wyatt Earp had been mostly a saloon-keeper, a bartender, a gambler, an opportunist, and yes a confidence-man. Remember that he was arrested in 1911 for running a crooked faro game to bilk money from an unsuspected sucker. The Los Angeles police did their job even though they knew he was a notorious badman with a reputation as a killer who was charged but never tried for the murder of Frank Stilwell.

His time as a peace officer was relatively short, sporadic, and interrupted with firings over dishonorable conduct such as not turning in taxes and fines collected, fighting with superiors, hiding behind his badge to skirt the law. And yes, using his badge to commit murder when he felt the courts wouldn't side with him as they usually did.

But let's not get the facts in the way of the legend. After all, as I've said before, there are people out there who want the legend to survive even when the facts disprove what many are still today being made to believe. There are books to be sold. And thus, there are some folks who have a vested interest in perpetuating the legend and promoting the lies, no matter what the truth about him really is.