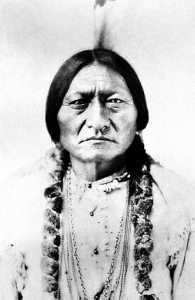 As I've talked about in a couple of other posts, the U.S. government defeated the Sioux. As a result, it took control of the Black Hills really no different than the Sioux Indians did when they defeated the Cheyenne Indians for that same land. The Sioux claimed the Black Hills were sacred lands. They claimed they were their traditional homeland, yet their actual traditional homelands were far to the East.

While some believe the Sioux Indians were originally a woodland Indian tribe of the upper Mississippi River in Minnesota, Iowa, and Wisconsin, we know that before the mid-1600s, that the Sioux actually lived in the area around Lake Superior. They were hunter-gatherers. They fished using spears from canoes. They hunted deer, buffalo, and other game, including turkey, elk, and bear. They gathered wild rice, wild spinach, turnips, wild herbs, and whatever else they could find.

After 5 years of continuous residence on the land, the original filer was entitled to the property, free and clear. The title could also be acquired after only a 6-month residency, and trivial improvements provided the claimant paid the government $1.25 per acre.

To make it more enticing to Union troops to take up homesteading and possibly persuade Confederate troops to give a second thought to their decision to take up arms against the Union, after the Civil War, Union troops were able to deduct the time they had served from the residency requirements.

It should be noted that the Homestead Act was part of the Republican Party platform of 1860. It should also be noted that skin color was not a factor in claiming a homestead. What I mean by that is that Black Union troops and freed slaves were eligible to homestead. And, of course, the same offer of Union troops being able to deduct the time they had served from the residency requirements also applied to Black Union troops. Of the more than 500 million acres dispersed by the federal government between 1862 and 1904, more than 80 million acres went to homesteaders.

In 1874, gold was discovered in the Black Hills. The U.S. Army sent troops to try to ease problems with miners and adventurers flooding into the Black Hills, but that was really futile as gold called more and more settlers to the area. Of course, this all only inflamed tensions with the Sioux Indians. It wasn't too long before the Great Sioux War of 1876 started. Also known as the Black Hills War, it would last until 1877. During its time, the Black Hills War saw a series of battles take place.

On June 25 and 26, 1876, the Battle of the Little Bighorn took place. That two-day battle resulted in the largest defeat of U.S. forces in American history, and to merely say that it was the most significant action of the Great Sioux War of 1876 would be an understatement.

The U.S. 7th Cavalry, Lieutenant Colonel George Armstrong Custer, who was formerly a brevetted Major General during the Civil War, and his total force of 700 soldiers suffered a loss of 268 dead and 55 wounded -- six of those wounded would die later from their wounds. Among those killed were four of Custer's Crow Indian scouts and two of his Arikara Indian scouts. A total of five of his twelve companies were completely annihilated. Custer himself, along with two of his brothers, and two other family members, were killed in that action.

The stunning defeat at the Battle of Little Big Horn had the American public screaming for vengeance as people were to annihilate the Sioux. While Sitting Bull's leadership inspired his people to a major victory that day, the federal government sent thousands of more soldiers to force the Sioux into ultimately surrendering. It's said Sitting Bull refused to surrender until 1881. By being the last to surrender, he certainly showed how much he wanted to keep up the fight.

On September 8th, 1883, Sioux leader Sitting Bull was an honored guest at a ceremony marking the completion of the Northern Pacific Railway. In attendance was former President Ulysses S. Grant, Secretary of State Henry Teller, the governors of every state that the railway connected, Northern Pacific Railroad president Henry Villard, other federal and state government officials, politicians, railroad barons, and workers, along with the U.S. Army. Besides the enlisted troops, a few high-ranking Army officers attended the event.

It should be noted that as a result of the Homestead Act, the discovery of gold, and the violation of treaties, by the mid-1870, there were about 5,000 American settlers living in the Black Hills. In 1880, that number was believed to be around 117,000 Americans living in that area. By the mid-1880s, the number of settlers had doubled to about 234,000. Knowing this, it's a safe bet to say that Sitting Bull was not happy with Americans or the federal government's policies when he arrived at the dedication ceremony.

Sioux leader Sitting Bull was not only in attendance but was there to say a few words to the audience. During that occasion, it's said that Sitting Bull seized the moment to give folks there an ear full of what he really thought of them.

Sitting Bull is reported to have looked directly at former President Ulysses S. Grant, Secretary of State Henry Teller, and the others there and said, "I hate all White people. You are thieves and liars. You have taken away our land and made us outcasts." And yes, he went on from there.

Of course, the audience applauded enthusiastically since they had no idea what he was saying. Remember, he chose to give his speech in Sioux and not in English. After their applause, believe it or not, Sitting Bull would bow back to them in return before going back to tell them how much he hated them. Yes, he would smile and bow, all while telling those in attendance that he hated White people.

At that moment, everyone rose, and Sitting Bull received a standing ovation.

Since first posting this story, I have been inundated with emails telling me that "White people deserved his scorn. Native American tribes never did to other tribes what the Whites did to Indians."

As for Sitting Bull's moral outrage and his hating White peoples, and what Native American tribes did or did not do to other tribes compared to what the Whites did to Indians? While I don't blame him for hating the Whites since the Whites were a stronger military force and the Sioux were beaten, we should remember that the Sioux hated Whites in the exact same way as to how Pawnee Indians hated the Sioux.

For one thing, the Pawnee Indians were nearly wiped out by the Sioux at Massacre Canyon, which took place in Nebraska on August 5th, 1873. That massacre was one of the last of over a century of hostilities between the Pawnee and the Sioux, who had been fighting genocidal warfare from the early 1700s into the 1880s.

The Massacre Canyon massacre took place when a party of over 1,500 Sioux warriors attacked a small group of close to 200 Pawnees, mostly made up of women and children. The Pawnee were out on their annual end-of-summer buffalo hunt. The Sioux murdered at least 156 of the Pawnee that day. Almost all were women and children.