What's Obama Doing - By Doing Nothing?

I read where President Barrack Hussein Obama has selected his Final Four picks for the NCAA tournament.  He's predicting all number one seeds, Duke, Kansas, Ohio State and Pittsburgh for the men's tournament, which he's unveiling on ESPN Wednesday afternoon.

It's the third straight year the Commander-In-Chief, our Chief Executive, the President of the United States of America, has filled out a bracket with the sports channel.  And yes, it's the second year he's done so for the women's tournament.

So tune in on ESPN on Wednesday!  That's Wednesday afternoon! And yes, the President has spend many many hours on the NCAA Brackets.

WTF! NCAA Brackets? Who gives a shit about basketball?

Japan has suffered the worst earthquake in recorded history, and the tsunami that hit Japan has killed over 10,000 people. And yes, they need help!

The Libyans who are fighting for democracy are about to be wiped out.  Saudi Arabia who is the biggest financier of Muslim terrorism is now feeling the wrath of an enslaved people.  And of course, Libya and Saudi Arabia aren't the only countries over there going through the pangs of peoples in rebellion.

The Middle East is falling apart, and our Administration still refuses to uncap American Oil wells in the West or give the OK to Drill in Alaska right now.  In the meantime, our gas prices and the cost of everything including food is going through the roof.

Today it was reported that food prices in the U.S. have shot up higher this last month than it has in the last 37 years.  The report went on to say that food and fuel shortages are in our future.

Our unemployment rate is climbing, and companies are moving.  American companies would rather go overseas than deal with a Business-unfriendly Federal Government. And of course the government's answer these day is to raise more taxes, instead of cutting the money to special interests.

The American Dollar is in danger of being replaced as the world's go to currency.  Leftist special interest groups and Unions now own the White House, and the Muslim threat in America grows daily.

To add to America's problems, just recently the United States Attorney General Holder, who is black, told a Congressional hearing that he supports the Black Panthers intimidating voters at polls in 2008 because of what was done to "my people" over the years. Someone should inform him that "his people" are now "the American people," he represents all of us and not just blacks.

And yes, let's not forget that there really is a full out War going on right here on our Southern border with Mexico.  And it hasn't slowed down at all.  In fact more people are being killed there, right now, than they are in Afghanistan and Iraq combined.

And what about protecting Americans?  It ain't happening! Everyday there are American citizens living along the Texas, Arizona, and California borders with Mexico who are being attacked by gunfire from armed bands of Mexicans drug runners and illegal alien smugglers.  The border is turning into a Demilitarized Zone no different than the DMZ that existed between North and South Vietnam.

And of course there is the fact that their leaving will also drive up the price of produce grown in our own country. It will be one more blow against our farmers trying to keep their farms.

Do you remember when America stopped drilling for our own oil in the United States?  We became dependant on other countries.  Well friends, if the environmentalist and the do nothing politicians have their way about it, that's how our food supply might be one day. All produce produced somewhere else and not in America.

And through all of this, what do we have by way of help from the White House?  Well, we have a President who would rather spend his precious time picking his final four choices for basketball. That's it!

Not much huh?  You bet it's not. Should it make people angry that Obama is spending his time on frivolous activities?  You bet it should.

So what's Obama doing by doing nothing?

Well, some say his failure to take action is just the same as a terrorist attack on the United States.  Some say that the executive branch of our government has essentially become disabled by way of Obama's incompetence and ineptness.

He has failed to conduct actual implemented executive policies on behalf of the American people.  He has no policies to implement, and I can't help but wonder if Obama feels any guilt about doing nothing while the world screams for action on his part? 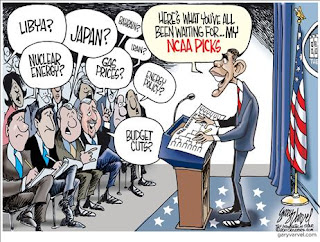 If he is, well he's certainly not showing it.  Maybe he feels no guilt in the same way he has no shame.