RANT: Who's Obama Working For?

So I don't get it! Maybe someone can explain it to me!

If you had the ability to drill for oil, pump, store, refine, and maintain oil facilities, verses someone who is completely dependant on you for any oil, then why wouldn't anyone want to be the person selling the oil instead of the one who is dependant?

These days, what's up is down and what's down is up side down. Everything is bass ackwords. It is all turned around and the President is not working for you and me.

Well, how about the President of the United States, Barack Hussein Obama, going to Brazil and giving them 10 Billion Dollars to finance them so that they can drill for oil in the Gulf of Mexico.

Is that proof enough, you want more?  Well then, how about him adding insult to injury when he tells them that along with giving them the $10 Billion that once they start producing oil that "We want to be your best customers!"

Why can't anyone tell him that it isn't wrong to be self-sufficient as a Nation? Why hasn't anyone told him that we as a Nation should not have to depend on another nation for anything to keep us alive? Someone should explain to him, that as a Nation, we should not be on constant life-support completely dependant on other countries.

Yes, America is more and more on life-support.

The U.S. Census Bureau and the U.S. Bureau of Economic Analysis, through the Department of Commerce, announced on March 11th of this year that there was a total January exports of $167.7 billion and imports of $214.1 billion resulted in a goods and services deficit of $46.3 billion, up from $40.3 billion in December.

And hey, it's getting worse!

Our goods and services deficit increased $11.7 billion from January of 2010 to January of this year. And since January of 2009, when Obama took over, his policies have had horrible consequences on our having to increase imported goods.

In January, petroleum and non-petroleum imports were the highest since July of 2008.


And what is the conclusion?

We NEED the countries in the Middle East to provide us oil. We NEED China for financial stability and most of our manufactured goods. We NEED Japan for our cars, Europe for our steel and other goods, South America for more and more food, and so on and so on!

We seems that we have become a Nation in need. How can I say that? It's because I believe that we have Federal and States governments who are bent on making our people more and more dependant on others.

Where do I get this from? From a Federal government who is more and more willing to turn over our sovereignty to the over-reaching influences of the U.N.. From the reality that the laws of our land can be held as second to Muslim Sharia Law in our courts just like they were recently in a Florida court. From the whole notion that we as a free people cannot drill in our own country to provide for America First. That's where I get this from.

It is insane! It is surreal! It is bizarre!

The Democrats, the Liberal Left, the Marxist Environmentalist, say that drilling in America would hurt the land and the animals and the plants and the air and and and ....

And how do they do this? By limiting America's ability to live to it's fullest capabilities. They limit America's ability to provide for itself. They limit us in the same exact way that other Despots like Gaddafi and Chavez deny their subjects the right to basic freedoms. They attempt to enslave Americans through ensuring our dependence on other countries.

And what do we have working for us? We have a President who works as an agent for other Nations so that Americans can be their "best customers" in the future. 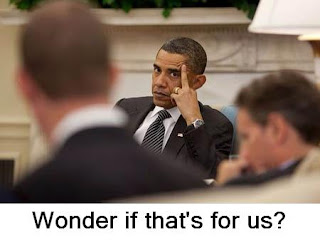