Out of the Mouths of Babes - A Great Joke For Sunday

A close friend was telling me about seeing some friends over the weekend. He said that they are hardcore liberals and huge money donors to the Democratic Party.
He said that they pride themselves on raising their children with the same sense of political values that they have.
This sort of confused me a bit because my friend is very Conservative, attends the Tea Party rallies, and always votes Republican. And honestly, I didn't think he had any friends from the other side. So I asked how it went?
Well, this is what he told me.
He said it was nice to see them, but the rule for him is to never talk politics with them.  He said when he saw them he tried to be polite and talk about everything but politics - and of course never mention any displeasure of the patron saint of the Liberal Left Barack Hussein Obama.
He said, he thought it would be safe enough to ask their 15 year old daughter what she wanted to be when she grows up?
She replied without hesitation that she wanted to be the first women President of the United States from the Democratic Party. Both of her parents were standing there, they smiled broadly.
Then he asked her, "If you were President, what would be the first thing you would do?"


She replied without hesitation, "As a caring Liberal and not an selfish Conservative, I'd give food and houses to all the homeless people." Her parents proudly beamed, "What a wonderful goal!"
Then my friend told her, "But you don't have to wait until you're President to do that. Tell you what, if you come over to my house and mow the lawn, pull weeds, and clean my windows, I'll pay you $50. Then I'll take you over to the liquor store where a homeless guy hangs out, and you can give him the $50 to use toward food and a new house. How about doing something wonderful like that right now?"
She thought that over for a few seconds, then she looked him straight in the eye and asked, “Why doesn't the homeless guy go to your house, and do the work, and then you can just pay him the $50?
"Well," my friend said, "I've asked him and he doesn't want a job or to work for his money. He'd rather live on hand outs."
She looked at him, puzzled, then said, "So why should I work hard to give my money to a homeless guy who doesn't want to work and make money for himself? Is that what Democrats believe in? That's crazy!"
"Welcome to the Republican Party!" he said.

And no, her parents still aren't speaking to him. 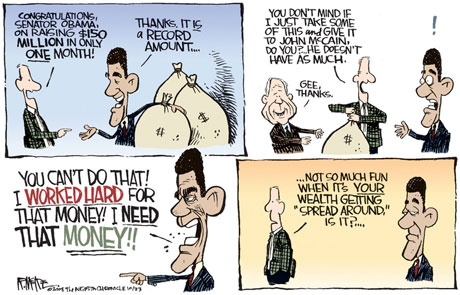