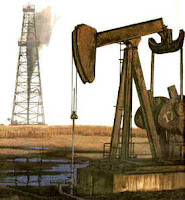 The consequences of not drilling right now is becoming more and more evident. The longer we wait to get going and move forward to utilize our own oil resources - the more we fall behind the rest of the world.


One way to divert the argument to drill here is Obama's effort to spin the truth about the amount of oil that we have available to us. Obama often uses statistics in speeches that are now being questioned.

"Even if we drilled every square inch of this country right now, we'd still have to rely disproportionately on other countries for their oil," Obama said, while pitching a plan to crack down on oil market speculators.

But now, in the last month, Republican Senators have accused President Obama of pushing a "less-than-honest" claim about the scarcity of domestic oil.

The reason is, on April 19th, 2012, a new U.S. Geological Survey study came out showing that the United States actually holds a quarter of the world's untapped oil supply.

The U.S. Geological Survey, the first such study in 12 years, paints a very different picture than what Obama is trying to pass off to the American public. The analysis showed the world outside of the U.S. holds 565 billion barrels of undiscovered conventional oil. The study agrees with a prior analysis by the Energy Information Administration that put the country's supply at 198 billion barrels. That works out to 26 percent of the world supply. 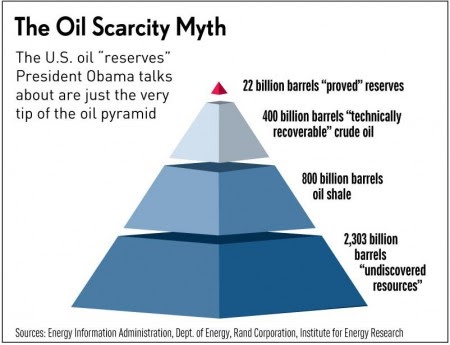 "Well, there goes President Obama's favorite talking point," Inhofe said in a statement. "The president's own administration has released a report which reveals that the United States has 26 percent of the world's technically recoverable conventional oil resources, and that's not including our enormous oil shale, tight oil and heavy oil resources. This report from the U.S. Geological Survey is vindication for anyone who thought that President Obama's claims ... are less than honest."

In the other, much bigger category, are the "undiscovered, technically recoverable" reserves - or all the other stuff geologists estimate is out in the world regardless of how accessible or economically viable it might be. That's what the USGS looked at.

None of this good news really matters as long as Obama is in office. Obama is anti-Oil.

He really believes that Green Technology will replace our need for oil. Of course, as I've said in other articles, oil for energy needs is only one part of a barrel of oil. 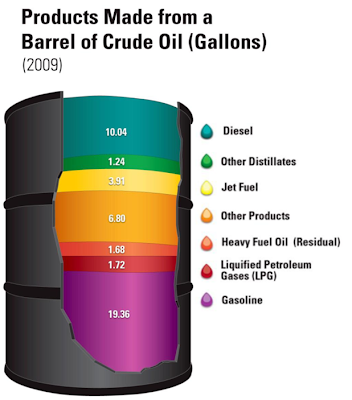 Obama and the Democrats seem to be completely unaware that about 6,000 products that we use every day - which have very little to do with gasoline - are petroleum based. So even if we found a way to power every car on a drop of water, heated our homes with a minute's worth of sunlight, and produced electricity for 320,000,000+ Americans with a single 8 by 10 solar panel - we would still need oil to produce those items that we take for granted every day.

From the computer that you are reading this on right now, to the keyboard, mouse, cables, plugs, light fixtures, or even the shirt that you may have on right now, they are made from oil.

Oil impacts our daily lives much more than in our gas tanks. According to Rankin Energy, one 42-gallon barrel of oil creates 19.4 gallons of gasoline. The rest of that barrel goes into making other products - Rankin estimates there are over 6000 items using oil in their manufacturing.

An article in the news recently reported that more people are buying cars and using more gas around the world than ever before. This growth in the global economy increases the demand for fuel, while oil supplies are projected to get tighter.

"China was at 5 million barrels a day in 2005. Today, they are at 10 (million). By 2015, they are going to be at 15-million-barrels-a-day demand," said John Hofmeister, founder of Citizens for Affordable Energy. "That's 10 million new barrels over 10 years. India is going from 4 to 7 (million) in the next three to four years."

As a nation, we must understand that China and India do not have the number of cars and trucks that the United States has and subsequently we need to ask ourselves -  so why do they need so much oil?

Fact is that China's need for more and more oil has very little to do with cars and fuel needs. They are manufacturing things - a great number of things - things that we no longer manufacture here - things that we have become dependant on in our daily lives.

One 42-gallon barrel of oil creates 19.4 gallons of gasoline. The rest, over half, is used to make everyday products. Yes, products - over 6,000 - that we take for granted everyday - are made out of oil.

Now here's just a partial list of what's made, so just try to imagine life without Oil which makes the following Petroleum based products possible.

President Obama wants to do nothing in the way of more drilling to tap into our abundant natural resources. He only sees oil as an "energy issue" - when in reality oil is more than just gasoline.

Obama argues that more drilling is not the way of the future. Instead, he wants to wean Americans off of oil entirely by turning to alternatives energy options like electric and hybrid cars, solar and wind power - and what I call his "Any Thing Other Than Oil" philosophy.

No matter how high gas prices at the pump go, "Any Thing Other Than Oil" is the mantra from the wealthy Liberal Left.

The problem with Obama's thinking, according to most analysts, is that the transition from oil to alternatives takes far longer than more drilling would.

"And we have a capital stock of hundreds of million of vehicles," Guy Caruso of the Center for Strategic and International Studies said. "So these types of transformations take decades and maybe even 50 to 60 years."

Lately, obviously because its an Election Year, Obama talks about oil drilling as if he were for it. Imagine that! Like a true politician, Obama is telling Americans that he is cutting red tape and issuing all sorts of oil permits for companies to get to work on Federal lands. He is lying.

The problem with Obama lying to the American people these days is that he might get a few to believe him - but the majority won't.

The data speaks for itself. Official government figures show that Obama is issuing far fewer permits on Federal land than George W. Bush did while he was president.

Since it can take seven to 10 years for a permit to turn into an actual producing oil well, that means less oil will be coming from Federal lands in years to come. That combined with a rise in global demand for oil is a recipe for disaster for the United States. Yes, all thanks to Obama's attitude of doing nothing to prepare for the future right now.

Advocates of more domestic drilling say we know a crunch is coming, so we should be drilling more right now - otherwise, the result could be ugly.

"The reality of the situation, with respect to global supply is that Americans can find themselves in gasoline lines, with gas rationing by 2015 or 2016 by us not producing more of our own oil," Hofmeister said.

Obama is either purposing neglecting the facts, or he's just too dumb to understand them. Either way, he should understand that the facts clearly point out that even with alternatives, the U.S. Energy Department predicts that in 2035 we will still be relying on oil for 83% of our transportation needs alone.

And yes, those figures are not taking into consideration all of our other needs for oil.

Obama can't get it through his head that it's not just about gasoline and cars! 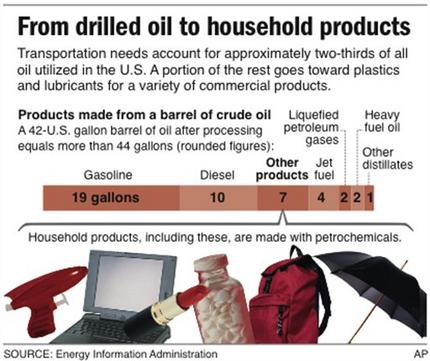 So ask yourself, as I have asked myself lately, when the President of the United States talks about not drilling for more oil - just how many manufacturing jobs is he talking about putting at stake by not drilling right now?

How expensive will these oil based products become if they can't be made easily made here?

How many companies are going to have to relocate their manufacturing facilities overseas because they make one or a few of the thousands of oil based products?

How many companies will want to take their manufacturing jobs somewhere else because oil is not readily available in the United States and may also be cheaper in other countries than it is here?

Ask yourself, how many Americans are going to suffer because of Obama's arrogance or ignorance? Maybe he should take a long look at how many products that we depend on comes from oil?

Fact is, there are reasons to drill for oil that have nothing to do with just cars and transportation. We need oil to produce goods! Obama and his cronies have tunnel vision and can't see that oil is more than just gasoline and the fuel end of the equation.

So OK, here's a proposal that I would think everyone would accept.

We need oil to fuel our manufacturing capabilities and make things that the world can use - subsequently buy - and them buying from us, empowers us as a nation. Yes, just like the situation that we are in with China today.

Because we need oil to make things, we need to explore and develop our own oil resources to produce oil for America and rid ourselves of being dependant on Foreign Oil to make things.

To me, it's an easy concept to understand. One that even your most ardent liberal can understand. Of course, he or she would not be in favor of empowering America - but that's their problem.

Energy and Oil Independence. Oil for energy needs sure, but also just as importantly - we need oil independence so that we can again make things that make our lives easier, cleaner, and better - while putting Americans to work.

Of course, Energy Independence like Oil Independence will never happen until Obama and his "let's blame-America Socialist friends" are out of power. And please note that I said out of power!

If they did feel a true responsibility to America, then they would already be encouraging drilling here at home - and deregulating things to make life easier.

Sad to say, they're not!