Sometimes Spurs Are Needed In Politics 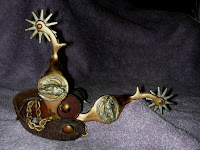 A few years ago, I remember a city kid coming over to me and asking me about the spurs that I was wearing.

He knew they had something to do with the riding horses, but he didn't know exactly how they worked. With a sort of worried tone to his voice, he asked if it hurt the horse and why were they needed?
And
I looked at the young man and decided to tell him about spurs with horses. I went about and tried to explain to him that spurs are used to enforce what you what.

The first thing you have to decide on why you need spurs. I knew a guy who had a horse that wouldn't move an inch without spurs. He would just about wear off his heel but that horse of his would not move. Once he put on his spurs, that cowboy got an immediate response.

I have a friend out in Utah that swears by jiggle-bobs. He said his horses and mules hear them jiggle-bobs and they automatically know that that cowboy wants to ride and not just sit there.

I've known a couple of cowboys who just liked having a set of spurs just for the sake of having them. Most of them had horses who really didn't need a spur, but the cowboys just like to have them.

No, spurs do not hurt the horse. They are used to get their attention!

Choosing the correct style of spur for what you need is the trick, and it all depends on what you want. Many styles of riding, such as Dressage and Western, incorporate spurs as part of the compulsory Dress Code, which meaning that you are not demanded to wear or use them.

For English riding, the spur is generally "slim line" and is close contact, allowing for precision movements and accurate departure without the cues being noticeable.

With Western riding, the spurs are much bigger to allow to fit around a Western Boot. They are also longer to allow for accurate movements due to the position of the riders leg in a Western Saddle. The rowel at the end of the Western Spur also provides in many cases, a softer spurring, as it rolls rather than jabs the horse.

The shank of the spur is important. The shape of the shank comes into play when riding Western.

This is important because it has everything to do with the kind of riding you're doing. When you sit in a Western Saddle your leg is pushed forward and out. On the other hand, if  ride English or a Dressage saddle, your leg is almost flat against the horses side.

This will determine whether or not the spur will need to be straight or curved and to what degree. Western spurs already are curved and you can buy them in varying degrees. It is best to ride your horse with no spur and get a feel of where your leg is in reference to the horses side and how he is traveling.

All of this depends on the response you're getting, or want to get. Some need more spur than others. The young man realized that spurs are just like the accelerator pedal in a car. You use it to get things moving.

In July, 2012, the Democratic leader of the Senate Intelligence Committee said that the White House appears to be responsible for the leaks of classified information that surfaced recently.

"I think the White House has to understand that some of this is coming from their ranks," Sen. Dianne Feinstein told a World Affairs Council forum.

The California lawmaker said she was certain that President Barack Obama, who receives a daily intelligence briefing, isn't disclosing secret information, but she was uncertain about others at the White House. "I don't believe for a moment that he goes out and talks about it," she said.

Republicans have criticized the disclosures, arguing that members of the Obama administration were intentionally leaking classified extremely sensitive material to enhance the president's reputation in an election year.

Attorney General Eric Holder has appointed two attorneys to lead the investigation into who leaked information about U.S. involvement in cyber-attacks on Iran and about an al-Qaida plot to place an explosive device aboard a U.S.-bound airliner.

Those leaks are still currently under investigation by Justice Department attorneys. But then again, some wonder who impartial Attorney General Eric Holder can be since he was just convicted of Contempt of Congress and works for the President.


Today, the Chairman of the Joint Chiefs of Staff, Gen. Martin Dempsey, who is America's top military official, criticized a group of former military and intelligence operatives for their campaign against President Obama.
He actually told Fox News that he is "disappointed" by such political activity, going so far as to call it "not useful."

The group of former CIA agents, Navy SEALs, and other military members, recently released a long political ad blasting Obama for security leaks on his watch, as well as suggesting he has taken too much credit for the SEALs raid in Pakistan that killed Osama bin Laden.

This seems to have gotten to Joint Chiefs Chairman Gen. Martin Dempsey sort of upset.

You can tell by the comment he made, "If someone uses the uniform, whatever uniform, for partisan politics, I am disappointed because I think it does erode that bond of trust we have with the American people."

General Dempsey is the most senior military officer to publicly condemn the group, which calls itself Special Operations OPSEC Education Fund.

"Is their criticism valid? I won’t comment on that," Dempsey said on board a C17 military aircraft en route back from the Middle East. "Is it useful? No, it’s not useful. It’s not useful to me."

Dempsey said as the steward of his profession - the military - he thinks it imperative that the military remain "apolitical."

He went on to say, "That’s how we remain our bond of trust with the American people. People don’t want us to be another special interest group. They don’t want that. In fact I think it confuses them."
Now Scott Taylor, one of the former Navy SEALs behind the campaign, responded to General Dempsey's comments in an interview Tuesday night with Fox News' Greta van Susteren, saying that they consciously excluded active-duty military because of restrictions on such political activity.

This group, however, intends to speak out.

"We have our First Amendment rights," Taylor said. "We fought for them, and we're going to continue to do so."

Special Operations OPSEC Education Fund unveiled its 22-minute video on its website last week and pledged to go on air with a TV ad sometime in September.

The Obama administration has been leaking security details for political gain.

In the video, an array of retired CIA agents and other intelligence personnel suggest the administration has been leaking security details for political gain, and specifically criticize President Obama over his public handling of the Osama bin Laden raid.

The group seems to be most focused on the controversy over security leaks.
The narrator in the video says former military and intelligence operatives who understand the importance of operational security "have had enough."

"Their mission - stop the politicians from politically capitalizing on U.S. national security operations and secrets," the narrator says, as a picture of Obama flashes on screen.

So about now, you've probably already guessed why I talked about spurs before entering into this article.

It bothers me when I hear the Chairman of the Joint Chiefs of Staff being political while saying he hates politics. He has no right to use his position to criticize civilians about taking the White House to task.

He should be applauding them!

Someone should explain to Joint Chiefs Chairman Gen. Martin Dempsey that civilians are making up that group of Patriots. Men and women who have given of themselves no more or less than he has.

But unlike the constraints placed upon our troops while in uniform, by God these people are Americans and former military and CIA personnel - now civilians.

It's a damn shame that anyone has to put on spurs to get investigations moving. To get an investigation that seems to be dragging along with no result and no non-political investigator looking into it.

This is a case of violating our national security. Yet, Obama just brushes it off as no big deal.


In an interview with the Virginian-Pilot, Obama said he isn't bothered by charges from a political group called the Special Operations OPSEC Education Fund which accuses him of overseeing leaks which put lives at risk.

President Obama's response was in itself an attack on the group, "I don’t take these folks too seriously. One of their members is a birther who denies I was born here, despite evidence to the contrary. You’ve got another who was a tea party candidate in a recent election. This kind of stuff springs up before election time."

His answer is typical of the standard Obama behavior of slander and discredit anyone who questions his policies or his deeds. Too bad really, fact is that he won't be able to smile and joke out of this.

This is a case of violating our national security and putting lives at risk.
Special Operations OPSEC Education Fund has picked the right spurs for the task of getting a response from Congress and the Justice Department. Media attention and talk will help spur things along.

I really believe that they will get answers to who is responsible for this, whether Obama wants it to go away or not.

Joint Chiefs Chairman General Dempsey should be praising their efforts instead of criticizing them. Of anyone in government, I would think he'd be the first one to answers as to who is intentionally leaking classified extremely sensitive material. Why isn't he?

I honestly don't care how hard these folks put the spur to the Obama administration, we need to punish those responsible been leaking sensitive material.

Whoever is responsible for this is a traitor willing to sell out our troops and America, all just for political gain.