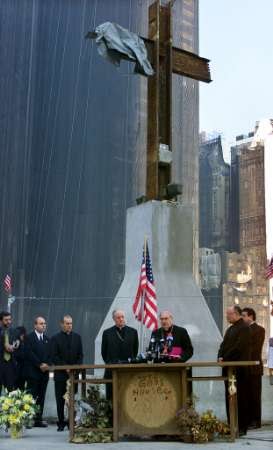 Another attack on the 9/11 Cross. Yes, the damned atheist are at it again!

Last year, I wrote an article entitled The 9/11 Cross

My article was triggered by a report from NBC News in July of last year. According to NBCNewYork.com, dated 7/27/2011:

"An atheist group has filed a lawsuit seeking to prevent a cross made out of World Trade Center steel beams from going on display at the 9/11 Memorial Museum. American Atheists sued this week in state court arguing that the group opposes the placement of the cross in the museum because members believe it is the only religious article getting special accommodation there. The cross, made of two intersecting steel beams, was found standing in the rubble of the World Trade Center following the Sept. 11, 2001 terrorist attacks."

"This steel remnant became a symbol of spiritual comfort for the thousands of recovery workers who toiled at ground zero, as well as for people around the world. In the historical exhibition, the cross is part of our commitment to bring back the authentic physical reminders that tell the story of 9/11 in a way nothing else can.”

He said it much better than I could have. Fact is that the 9/11 cross is an "authentic physical reminder that tells the story of 9/11 in a way nothing else can.”

Besides standing for those who worked tirelessly, besides giving hope to those there in the aftermath, the 9/11 cross stands for those who died on 9/11 and others who were murdered by Muslim terrorists.

The 9/11 cross is part of what happened to America that changed us as a free nation. We should remember everyday what happened on 9/11.

Now the National 9/11 Museum is fighting a group called Atheists Inc. in court.

The National September 11 Memorial & Museum wants to smite a group of godless activists opposed to its planned display of the famed World Trade Center cross.

In court papers, the National 9/11 Museum says American Atheists Inc. doesn’t have a prayer of proving that the iconic, cross-shaped steel beam will impose religion "through the power of the state."

The Manhattan court filing seeks to toss out a lawsuit the atheists filed last year over claims that inclusion of the 17-foot-tall “artifact” in the museum’s collection would violate the First Amendment.

"As a threshold matter, the 9/11 Museum is an independent non-profit corporation," court papers say.

"Its curators’ decisions to display particular objects, such as the artifact, in the museum are not state actions to which Constitutional protections apply."

Plans call for the cross of steel beams — found in the rubble two days after the Twin Towers fell — to be displayed in a section of the underground museum titled “Finding Meaning at Ground Zero.”

According to the museum, the cross is an “important and essential artifact” that “comprises a key component of the retelling of the story of 9/11, in particular the role of faith in the events of the day and, particularly, during the recovery efforts.”

"After its discovery, the artifact was venerated by certain workers during the course of the rescue and recovery operation at Ground Zero, including in religious services conducted by a priest," the court papers say.

"Many of them came to regard the artifact as a source of comfort and spiritual symbolism during their time at Ground Zero, and they treated it as such."

The museum also blasts the atheists for suggesting that a “17-foot-high A for Atheists” or an American Atheists lapel button also be included in its exhibition.

These days, I find that I usually take things in stride. Sure I shake my head and wonder how such a small percentage of our population can have such an impact on the rest of us.


And though I'm not usually a violent man -  sometimes I can't help but wonder if some of the more militant types at groups like Atheists Inc. would benefit from just a good old fashion ass kicking for putting America through so much grief.


They do want to push the envelope when it comes to demanding that their belief in nothing is the norm in America.

I can't help but wonder how they'd like it if America just got so fed up with their demands that they were deported to some country that doesn't have a population who is overwhelmingly Christian or believes in God in some other way?

Maybe then they'd find out what it is to live with a group a people who believe in nothing?

And yes, if you believe in nothing - you have no moral compass. Without morals as a guide, it's no wonder that atheist don't know the difference between right and wrong behavior.

The 9/11 Cross, which appeared in the rubble of the buildings destroyed in the Sept. 11, 2001, attacks has been a sore spot for the Liberal Atheists in the United States since it appeared after the attacks.

There will be no separation between this steel “cross” and the World Trade Center memorial.

The Second Circuit Court of Appeals rejected a bid by American Atheists Inc., a Liberal Leftist group with ties to the Democrat Party, to remove the famed cross-shaped steel beams that survived the 9/11 attacks from the National September 11 Memorial & Museum.

The panel wrote: “[Given] the absence of any evidence of ulterior religious motives, and the undisputed historical significance of The Cross at Ground Zero, we conclude that, as a matter of law, the record compels the conclusion that the actual purpose of displaying the cross in the September 11 Museum is a genuine secular interest in recounting the history of extraordinary events.”

The atheist group had sued the Port Authority and museum operators in 2011 — roughly three years before the museum opened in March underneath a national memorial dedicated to documenting the history of the 9/11 terrorist attacks and the heroic rescue and recovery efforts that followed.

The historic artifact is a 17-foot, 4,000-pound steel crossbeam shaped like a Christian cross that was found by excavator Frank Silecchia in the rumble right after the Muslim terrorist attack on 9/11/2001.

The Rev. Brian Jordan, a Franciscan priest who performed rites at Ground Zero, blessed the cross as a point of refuge.

While this ruling is a huge defeat for the Liberal Left in America, one has to be naive to think that this will not stop them from trying to have the 9/11 Cross removed.

Like it or not, Liberal Atheists are trying to remove any and all Christian symbols from public view -- and yes, it irks them that the 9/11 Cross simply appeared and gave comfort to all there at the time of the Muslim attack.

Tom Correa
Posted by Tom Correa at 4:51 AM