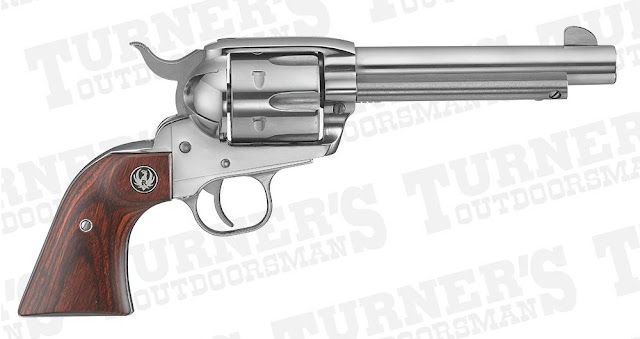 Since its introduction in 1993, the Ruger Vaquero has dominated the Cowboy Action Shooting world and earned its reputation for rugged reliability due to its strength and mechanical superiority. And yes, it has been referred to as "'the gun that won the New West" because of its widespread popularity among single-action shooters and cowboy action competitors.

In reality the mid-size steel frame and cylinder are scaled-down to the same size as the original 1955 Ruger Blackhawk, closely resembling the classic single-action revolvers of the late 1800's.

In the early 1950s, Westerns like High Noon and television shows like Have Gun Will Travel created a new interest in the single-action six-guns of the Old West.


Bill Ruger led the charge to create them, beginning with his .22 caliber Single Six revolver in 1953, and following two years later with the first of his center-fire Blackhawk series in the same vein. Though beefier, sporting improved sights, and a stronger mechanism including, for example, coil springs, Ruger left them otherwise true to the original Colt design.

Because of demand for the Colt Single Action Army, Colt Firearms soon brought their equipment out of mothballs and began producing another generation of the original. As with their Single Action Army. Uberti, Great Western, and other manufacturers got into the game too, but there is nothing like a Ruger Vaquero.

The Ruger Vaquero is a six-shot single-action revolver manufactured by Sturm, Ruger based on the .357 Magnum New Model Ruger Blackhawk frame that was introduced in 1973. Today they are available in .45 Long Colt as well.

The original Vaquero came only in blued steel, case colored, and a gloss stainless finish. The gloss stainless finish is intended to resemble closely a 19th Century nickel-plated finish. And yes, all of which are available with wood, hard rubber, simulated ivory or black micarta grips and fixed sights.

The Ruger Vaquero is a New Model Blackhawk with fixed sights consisting of a front blade and a notch milled into the frame at the rear. These initial Vaqueros have only two hammer positions: fully down, and fully cocked.

The first version was a 7+1⁄2 inch barrelled revolver chambered in .45 Colt with a simulated color case-hardened frame and a blue barrel, grip frame, and cylinder. This was followed by models with a 5 1⁄2 inch barrel and a 4 5⁄8 inch barrel based on the other common barrel lengths of the Colt SAA.

The three versions were offered in stainless steel and other calibers including .44 magnum, .357 magnum, and .44-40 Winchester.

Originally all Ruger Vaqueros were shipped with walnut grips incorporating a Ruger logo in a medallion. In 1998, some models began shipping with a "faux-ivory" grip -- and limited runs with gold inlay and engraving were offered.

Like the New Model Blackhawk, the Vaquero does not require the hammer to be half-cocked for loading and unloading because it uses a transfer bar mechanism which prevents the cartridge under the hammer from being fired without the trigger being pulled.

Ruger placed the safety warning which used to appear on the left-side of the barrel beneath the barrel on these models to make the gun more aesthetically pleasing.

Many reloading manuals contain Ruger-only recommended handloads that are considered unsafe for use in other than Ruger Blackhawk, Redhawk, Thompson/Center,  and Ruger Vaquero model revolvers.

Ruger's "New Model" Vaquero model revolvers, having thinner cylinder walls, are not considered safe for use with the Ruger-only loads taken from the older editions of these manuals. Ruger states that the "New Model" Vaquero will handle +P and +P+ ammunition without any issues, but they warn users not to shoot reloads in any of their guns as it will void the warranty.

It is interesting to note that unlike original Colt Single Action Army revolvers, both Vaquero versions are safe to load all six cylinders because Ruger incorporates a transfer bar safety design in it's pistols.

Also, both Vaquero variants permit reloading by simply opening the loading gate, thereby freeing the cylinder to rotate freely, without pulling the hammer into the half-cock notch. As for other new features, the Vaquero includes a patented Ruger Reverse Indexing Pawl which allows for easier loading and unloading, while the traditional beveled cylinder simplifies holstering.

The New Model Vaquero also has an Internal Lock unobtrusively located beneath the right grip panel. It provides an added measure of security. The standard grip is very similar to the grip on the original Single Action Army revolver.

Users with smaller hands may not find the trigger to be comfortable to shoot on Bisley variants, by reason of not being able to place their trigger finger properly on the trigger, the trigger being located further from the grip.

Another variant, and my favorite, is the Birdshead grip, similar to the pattern found on the Colt M1877 and M1878 models.

The last variant is the SASS (Single Action Shooting Society) model of Vaquero. It has the Old West feel and handling featuring the pre-1962 "XR-3" style, steel grip frame and black, checkered grips with SASS logo grip medallion, and just as with the Bisley model it includes a lower wider hammer spur.

In 1999, a limited run of 500 guns in stainless steel and 500 guns in blue with color case hardened frames were offered by Davidson's with a 3 3⁄4 inch barrel and a shortened ejector rod and housing.

These were called the "Sheriff's Model". And yes, in 2005, this short barrel Vaquero was added as a standard option to Ruger's catalog that year.

As stated before, the Vaquero was introduced in 1993 to meet the growing demand for quality modern firearms used in the growing sport of Cowboy Action Shooting. In 2005, Ruger introduced the "New Vaquero" which incorporated a smaller frame, based on Ruger's XR-3 grip frame, making the pistol closer to the size of the original Colt Single Action Army revolver of 1873. And yes, the Vaquero will accept two-piece grips made for the Colt Single Action Army.

The Firearms Distributor known as Davidson's offered two exclusive chamberings of the Vaquero with convertible cylinders. An additional special Commemorative Edition chambered in .40 S&W was ordered by the San Diego Sheriff's Association in 2000 to celebrate the agency's 150th anniversary.

The San Diego Sheriff's Association wanted the Vaqueros to use the same caliber as their normal service weapons. The original order was placed for 500, but later was increased to 800 due to overwhelming response from the association's members and alumni.

Sources conflict on the reasoning, but either to ensure plenty were available for members, or due to a minimum 500 production run size limitation, Ruger went on to produce an overrun of about 200 for a total of 1000 models. Some of those overrun models were taken by the SDSA members. All of the models sold to the SDSA members were embossed with the SDSA logo on the right side of the barrel and came in a special display case along with an acrylic encased badge.

Approximately 125 of the extras were eventually released through select Ruger distributors in standard black plastic cases and with no SDSA logo. Most had the safety warnings on the left side of the barrel like normal Vaqueros and the original SDSA guns.

However, Ruger ran out of the .40 S&W barrels before the frames and cylinders and later produced extra barrels to finish the remaining few guns, some of these were released through select distributors as late as 2009. Those are referred to as "cleanup" models, something all manufacturers do as the production run of a model is winding down. And yes, on those approximately 25-30 cleanup models the warnings normally stamped into the left side of the barrel were moved to the underside of the newer barrels leaving the side clean and completely smooth.

While all of these models are desirable for their unique caliber, the few that escaped without any markings on the left side of the barrel are now sought after collectibles, not only for the unique caliber but for the smooth barrel that many collectors feel adds to the overall beauty of the guns.

What are the Ruger Vaquero specifications?

With the popularity of Cowboy Action Shooting, the Ruger Vaquero found a following. And really, it's a pretty justified following.

The reasons are simple. First there still is a demand for a single action revolver that is more traditional in appearance than say the Ruger Blackhawk. And second, the Vaquero has a winning design that sports a bar safety that supersedes the drawbacks of the Colt Single Action Army's 1873 design.


So why is the Transfer Bar Safety Mechanism, the hammer block bar safety, so important?

All Ruger Vaqueros have the patented Ruger transfer bar mechanism and loading gate interlock that provide an unparalleled measure of security against accidental discharge. And yes, that's is very important.

If you want an example of why that is so important, take for example what happened to infamous Wyatt Earp. Yep, Wyatt Earp.

From a news clipping of the time, the January 12, 1876 edition of the Wichita Beacon:

“Last Sunday night, while policeman Earp was sitting with two or three others in the back room of the Custom House Saloon, his revolver slipped from its holster, and falling to the floor, the hammer which was resting on the cap, is supposed to have struck the chair, causing a discharge of one of the barrels. The ball passed through his coat, struck the north wall then glanced off and passed out through the ceiling. It was a narrow escape and the occurrence got up a lively stampede from the room. One of the demoralized was under the impression that someone had fired through the window from the outside.”

Earp had in fact admitted that it happened when his biographer Stuart Lake asked him about it, and in a note asked Lake to leave out “the little affray with the chair.”

When Lake’s Wyatt Earp, Frontier Marshal did come out a few years later, Earp was emphatically quoted in it as saying "professionals would never carry a live round under the hammer of a single-action revolver."

If Wyatt Earp were carrying a Ruger Vaquero, he won't have had experienced a dropped-gun accidental discharge as he did with his Colt.

And yes, that's only one aspect of the great design that makes the Ruger Vaquero the superior single-action that it is.

But for me, the transfer bar safety is probably the most important part of their pistols.

Now, for full disclosure, I own a "few" Ruger Vaqueros. I bought my first Vaquero in the late 1990s. Now referred to as an "Old Model," I loved the heft of the piece, the balance, the feel and the durability. It is a great single-action in .45 long colt. One that can definitely take the higher pressure rounds.

In 2007, when I got into Cowboy Action Shooting, I bought another Vaquero. But since I liked the "Old Model", because I liked the extra heft, I really wanted to get another "Old Model".  But, when I couldn't find one, I opted for the lighter "New Model" Vaquero in .45 long colt.

The "New Model" Vaquero is a great pistol, wonderful balance, and great handling. The only drawback is that I've been told that it can't take the higher pressure rounds.

Lately, I bought another Ruger Vaquero from one of Ruger's exclusive distributors. It is a Vaquero that I have been looking for for a long time. It is a "Birdshead" Vaquero. And yes, add the fact that a "Birdshead" Vaquero fires the .45 ACP round, which of course is also use in 1911s, and it is one sweet piece.

To me, any purchase of a Ruger Vaquero is a smart buy. They are simply what they are; well made, reliable, durable, and cost effective. 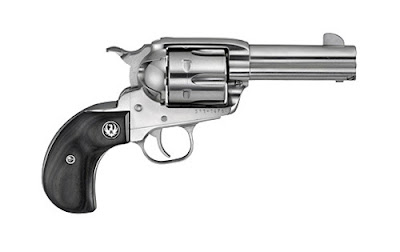 All in all, Ruger Vaqueros are great guns!

And yes, that's just the way I see it.
Tom Correa
Posted by Tom Correa at 3:26 PM