Politically Incorrect And Worried About Our Safety

Everyone knows how things are these days with Political Correctness taking over our nation. Fact is, a lot of folks are afraid to call a spade a spade especially when it comes to exercising their freedoms of speech and protest.

We all know real well that if we say anything negative about the criminals crossing our border from Mexico illegally, without documentation and skirting the legal process, then we’re automatically labeled "racist, bigoted, and anti-immigration."

Political Correctness is a way of stopping discussion. Well, call me what you will! First, I assure you that I've been called much worse. And second, frankly I don't give a damn what folks call me!

I don't care what I'm called when it comes to our safety and security. Folks can call me racist, or whatever else they want, it just doesn't matter to me.

As a former Security Consultant for most of my working life, I know hard security decisions means being unpopular and unreasonable to many. That is, until something happens. That's when folks say "well why didn't someone have the balls to take a harder stance and do what was needed?"

Friends, whether it's the security of Nuclear Weapons storage spaces or of a Professional Football Game, security means controlling entry to those people you want in and those you want to keep out. It is just that simple.

And while no one is saying close the borders to Canada or to Mexico to legal immigration, I am saying we should be concerned about our safety and security before politics, political language, votes, money, and power -- things politicians in both parties are more concerned with.

There are many countries in Europe which are finding out that obstacles stop unwanted entry. People have been using walls and fences and other sorts of barriers do work. From the Great Wall of China, to Hadrian's Wall and the Antonine Wall in England, to the Vatican Walls in Rome, to the Maginot Line in France, the examples are pretty much endless when talking about defenses to keep invaders out of a nation until it's safe. While prison walls are meant to keep bad guys in, while not perfect, walls can be one solution to keep bad guys out.

Friends, there is a reason Old West forts have walls, that there are fences around military bases today, that our national laboratories have fences, and we have "fire walls" in computers. They work. And frankly, let's face facts, security barriers are all about controlling entry to letting in who and what we want -- and stopping that which we don't.

Back in the late 1970s, my first couple of years after leaving the Marine Corps, I drove big rigs, worked in a machine shop, and even worked for the Western Pacific Railroad. Those were hard economic times under Jimmy Carter, and soon I found myself using my extensive Marine Corps security training working in private security.

I found myself being hired to supervise and train poorly trained security guards. It was a job that I didn't like at first because I saw many of them as just working in security until "something better" came along -- certainly not the attitude of a professional.

Some on the other hand had training, and were very professional, very diligent, and extremely vigilant. While their supervisor, I tried to help them by supplementing what they already knew regarding different aspects of security.

While I was specializing in executive protection, I also found myself working strikes. Yes, I was being hired to coordinate others to stop angry Union Strikers who wanted to burn down their employer's buildings and vandalize property.

Believe it or not, one client was the Alameda County Sheriff's Department when their own deputies called in with the "Blue Flu." It was illegal for them to strike, but not to call in sick. I was called to coordinate the placement of private security guards as a defensive barrier to stop those deputies from vandalizing county property -- specifically their own patrol cars which they had already done the night before I was called out. Yes, that really happened.

Of course, in 1980, I was hired to help stop the problems created by unwanteds at Candlestick Park when the San Francisco 49er football team held their games there.

In the case of strikes, extreme went both ways, most of the time with small strikes our defensive barriers were vigilant guards in communication to get help as fast as possible. Of course, the other extreme was like what took place at Foster Farms chicken facility when our walls were made up of lines of security guards, multiple police agencies, sheriff's deputies, and Highway Patrolmen and women. All there to keep 1,500 angry strikers from attacking the plant. In all cases, our walls were good old fashion vigilance to sound the alarm when something wasn't right.

In the case of Candle Stick Park, we had huge smooth walls around the stadium. And since the property was ours, we patrolled both sides of the walls. We also had gates where we monitored, searched, and allowed entry to those who had tickets to come in. Yes, as most people already know, this is the way security for all sporting events are handled.

So my question is, why not treat America in the same why we treat any sporting event? Why not treat our border as we would any football game by having walls, fences, and entry points where we can screen who's coming in and let in only those with a ticket.

Back in the day, I was hired to stop the street gangs from nearby Hunter's Point from jumping the fences and creating all sorts of mischief and mayhem in the stadium during the game. The gangs were coming into the games to steal, sell drugs, cause fights, assault spectators, and more. And yes, we also had a couple of attempted rapes which we stopped.

Thirtyfive years ago, we had a third of the security personnel that they use at the games today. So how did we succeed in stopping the violence and mayhem with only what we could afford back then?

Simple: we made an accurate assessment of our security needs, we formed a security plan of attack, we hired good people, afforded them great compensation and training, then we deployed and supervised our assets to make full use of what we needed to accomplish.

Besides doubling the number of guards at each of the gates checking everyone to see if people were bringing contraband into the stadium, I brought in guards who were specifically trained to deal with those outlaws on both sides of the wall. These guards knew the problems and our objective, and were paid to stop things before they happened by controlling entry.

And yes, we patrolled both sides of our walls. That is a huge part of the success that we had. We tried to stop the problem before he or she entered. And if we saw it taking place and couldn't stop it form the outside, we picked them up on the inside and escorted them back out. It worked very well.

Though I'm now retired, I can say that I've been blessed in that over the years, during lean economic times, I kept food on my table because of my being called upon to help businesses with similar security problems.

On March 20th, 2016, during a visit to the U.S. - Mexico border near Nogales, Arizona, presidential candidate Bernie Sanders called the controversy over immigration "trumped up".  He said, "the so-called immigration problem we face today at this particular moment, is a trumped up and exaggerated problem."

Friends, this man shows how absolutely ignorant he is of the problem. He waves citizenship in their face as an enticement to enter our country illegally! And frankly, the border is not a criminal justice system problem on the border -- the border is a security problem. This is not a "law enforcement problem," this is a security breach of national proportions.

Our Border Patrol is a security force which is being restrained by the criminal justice system that wants them to arrest and detain instead of arrest and return to Mexico. Right now, our "Catch & Release" of Illegals means apprehension and then released by our courts. I believe that our Border Patrol should have the authority to walk someone to a gate and return an Illegal to Mexico.

Our agents should tell them to "Come back when you're legal." Yes, in essence, tell them, "Go buy a ticket if you want to come in." The same thing that every sporting event in the nation does to those breaking the law and trying to get in free without paying.

What we need on the border is a barrier, a fence, a wall, anything that can stop or impede movement across the border. We need entry point where people are screened, searched, and checked for the proper paperwork. We need to deploy highly paid security personnel on both sides of our wall. They need to be trained and supervised to be vigilant and pro-active.

Yes, we need to turn people around at the border -- long before they make it in and being part of the criminal justice system and the courts.

And while some will call it "simplistic," security barriers, fences and walls do work to stem the tide and help control entry. Like a sporting event, no ticket means no entry.

We can use today's technology and patrol both sides of our defensive barriers. For example, Israel is under constant threat of war and uses a defensive system to prevent terrorists and invasion. I believe that their "wall" can be modified to be used here. 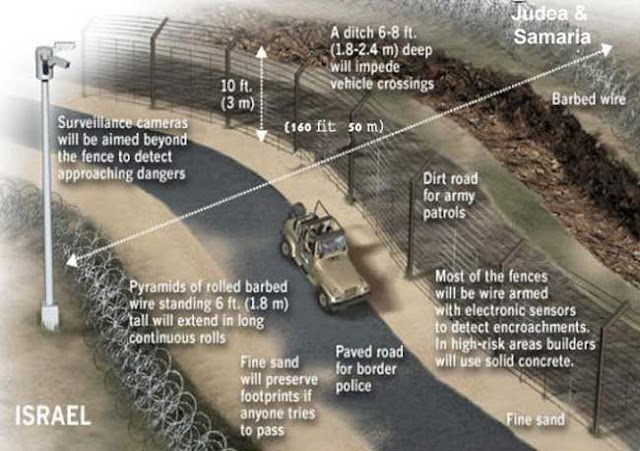 As for Bernie Sanders who decided to finally get off his ass and get a job when he was 40 years old, I can assure everyone reading this that it was not in the security field. He knows nothing about what he is addressing in most things, security included. And frankly, his statement amount to an Open Border policy where no one needs a ticket to get in.

Sanders does not accept the reality that we must stop bad guys before they can do bad, just as we should reward good people by allowing them entry. He is not realistic and talks like a fool when it comes to conducting the security of our nation.

So while he and others can laugh at Donald Trump for saying we need a wall, they are the ones who should be laughed at. Because frankly, they have no solutions at all.