Russian Bill was born in 1853 as William Tattenbaum. Bill claimed to be of Russian royalty being the son of Countess Telfrin, a wealthy Russian aristocrat.

He first made his appearance in the Arizona Territory in the mid 1870s and was known immediately as a dandy because of his fancy attire and known as a man who could spin a wild yarn.

Bill had claimed to be in the service of the Russian army as one of the Czars Imperial Hussers, and also claimed he had to leave Russia after punching a Superior officer, though nothing can be found to back this statement.

When Bill showed up in the Arizona Territory, he met and made friends with several of the "cow-boy" faction in South Eastern Arizona which included Tombstone. His notorious list of friends included Johnny Ringo, Ike Clanton, and Curly Bill Brocius just to name a few. It is said, although he was liked by the cow-boy faction, most of the cow-boys did not believe his story of Russian royalty and by accounts Bill was more of an amusement to them and they never took him seriously.

Russian Bill did however become involved with the cow-boys also becoming involved in the art of cattle rustling along the border, and at that time he became friends with a cow-boy by the name of Sandy King who was also involved with the Clanton faction. Sandy was well known for his saloon brawling nature and even though the two were polar opposites they became very good friends.

Little is known about Sandy King, he was possibly born in either Texas or Arkansas around 1852. King was an outlaw involved in cattle theft, armed robbery, and who knows what else while running with the Clanton cow-boy faction before, and up to, the gunfight at the O.K. Corral.

He was not involved in the gunfight because he left Tombstone just previous to the altercation and headed over to Shakespeare, New Mexico, with Russian Bill in tow where they continued rustling cattle. King became known as a saloon brawling gunman and the town bully in Shakespeare, and was arrested in November of 1881 after shooting a storekeeper following a dispute. He shot off the index finger of the proprietor's right hand.

During Sandy King's visit to the local hoosegow Russian Bill was out rustling cattle. Not being a very intelligent thief, he was caught red handed with his new found group of bovine on November 9th, 1881, and was promptly thrown in jail with his co heart Sandy King.

Russian Bill was swiftly tried by the vigilance committee and found guilty of cattle rustling. He was also sentenced to hang. One member of the committee proposed that Sandy King should also be hanged as a damned nuisance and the others all agreed.

Both men were dragged from jail to a makeshift courtroom in the Grand Hotel dining hall and in his defense, King pointed out that others had committed worse crimes than he who hadn't been punished. King cited the case of a fellow by the nick name of Bean Belly Smith who had shot another fellow by the name of Ross Woods while they argued over who would got the last egg in the house. The committee, not feeling one bit sorry for King, stuck to the conviction.

As the ropes were being thrown over the ceiling rafters, Russian Bill began to beg for his life but to no avail. Sandy King, on the other hand, only asked for a drink of water explaining that his throat was dry from talking too much trying to save his hide.

After King had finished his water both men had the nooses placed over their heads and were pulled up and left dancing on air until strangulation sent them upon their way with the grim reaper. The following morning the stage stopped at the hotel and the two dead men were still hanging from their new neck ties as a message to others -- that bad characters would not be tolerated in Shakespeare.

Supposedly a gentleman acting on behalf of the Countess Telfrin showed up in Tombstone sometime later looking for Bill Tattenbaum to return him to his mother the countess. Word was sent back to her that her son had committed suicide, sparing her the awful truth.

Below is a newspaper clipping of the hanging of Russian Bill and Sandy King. The report of the hanging below is from the Bucks County Gazette in Bristol, Pennsylvania. 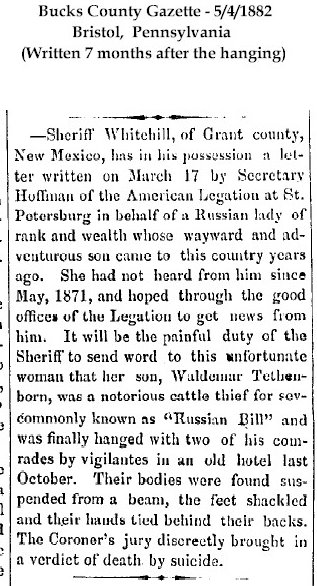