We can stop the BLM execution of 45,000 Wild Horses 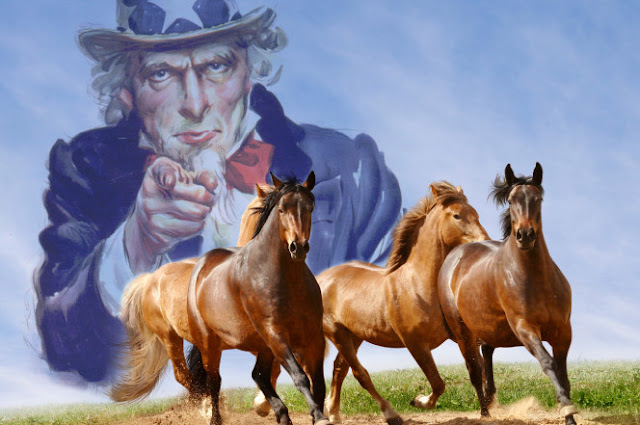 BLM execution of 45,000 Wild Horses is hitting the Mainstream Media

US Government could kill 45,000 wild horses

The FoxNews.com headline reads:
Wild horses should be killed or sold, government board decides


The U.S. government is coming under fire from animal rights activists amid concerns that almost 45,000 wild horses could be euthanized in an attempt to control their numbers.

Last week the Bureau of Land Management’s National Wild Horse and Burro Advisory Board recommended that the Bureau euthanize or sell “without limitation” excess “unadoptable” horses and burros in the BLM’s off-range corrals and pastures.

An “unadoptable” horse or burro is typically at least 5 years old, making them less attractive for purchase or adoption. The bureau has more than 44,000 horses and more than 1,000 burros in off-range pastures and corrals.

The recommendation prompted an angry response from The Humane Society of the United States. “The decision of the BLM advisory board to recommend the destruction of the 45,000 wild horses currently in holding facilities is a complete abdication of responsibility for their care,” said Humane Society Senior Vice President of Programs & Innovations Holly Hazard, in a statement.

With virtually no natural predators, wild horse and burro herd sizes can double about every four years, which means that thousands of the animals are removed from the range each year to control herd sizes and protect the land. The BLM has its own off-range holding corrals in states such as Nevada and California, as well as contracts with private ranches in locations such as Kansas and Oklahoma.

The Bureau has not yet made a formal response to the board’s recommendation, although, in a statement, it said that it will continue to care and seek good homes for animals that have been removed from the range. “What this means is that we will continue with our current policy, which is not to sell or send wild horses or burros to slaughter,” it said.

A BLM spokesman told FoxNews.com that the animals are protected. “These are public lands and the horses are a symbol of the history of the Old West,” he said. Since 1971, the BLM has adopted out more than 235,000 wild horses and burros, according to the spokesman. “We screen buyers and we screen adopters,” he added.

The agency also noted that the Wild Horse and Burro Advisory Board is an independent panel comprised of members of the public.

The bureau spent $49 million caring for off-range animals during its fiscal year 2015, which accounted for two-thirds of its wild horse and burro budget.

However, the Humane Society has slammed the agency’s efforts. “Over the past 20 years, the BLM has maintained round-up and removal as a primary management strategy for wild horse and burro populations on America’s western rangelands – an effort which has led to a financially unsustainable Wild Horse and Burro Program,” it said, in its statement. “By focusing massive efforts on removing horses and burros from the range, without treating those horses remaining on the range with any form of fertility control to limit population growth, holding facilities throughout the United States have become overburdened.”

While I don't trust the Federal Government at all these days, and frankly think the BLM would say anything to pacify the general public, we need to take action and stop this from taking place.

Friends, this getting out on the Mainstream Media is good for us because it helps us stop it. This means the word is getting out and the public is not happy at all about the way the BLM is "taking care" of America's Wild Horses.

It means that while our petitions go unnoticed and thrown in the trash at the White House, our voices are still being heard. This all means we may be able to stop this injustice and get those animals freed one way or another.

President Obama is looking at the money spent on America's Wild Horses versus how much money he wants to give to Muslim "refugees" to resettle her. Friends, if left to Obama the Wild Horses will be killed.

Yes, besides pressure from Environmentalist to keep horses and cattle off public lands, Obama sees the money spent on the BLM budget for Wild Horses and Burros as better spent on his pet project of bringing in Muslims from Syria and resettling them in the American heartland.

Ever wonder why all of the Muslim refugee settlements are in rural America in Red States and not in Blue States in the Liberal cities? Liberals have the clout to keep the refugees out and the Democrats want more Muslims in what has been traditionally "Christian America". And while I feel that there's a tie between what Obama wants to spent on Muslim refugee and what's spent on our Wild Horses, I'm sorry to say that that's a subject for another day!

Right now, we can feel good that the word is getting out and that there may be outside pressures put on the Obama administration to give these horses and burros a reprieve, but let's not get our hopes up too far and stop getting this word out to as many people as we know.

We need to call our television and radio stations, and our newspapers, and hit them with questions. We need to generate interest to save these horses. We need to ask them why this is being done to save money -- yet the money to care for the horses and burros has already been allocated?

If they are slaughtered, than the law will have again been broken and nothing will be done about it. So ask them why aren't people in the Obama administration following the law and truly protecting those horses? Ask how is it that the law protecting the Wild Horses is not being adhered to, and instead is being manipulated behind the scenes to create this genocide?

Ask why this is considered the BLM's "final solution" when they created this problem in the first place when they round them up for adoption? Ask about other alternatives, including taking the 45,000 horses and turning them loose all over the 22 contiguous Western states? 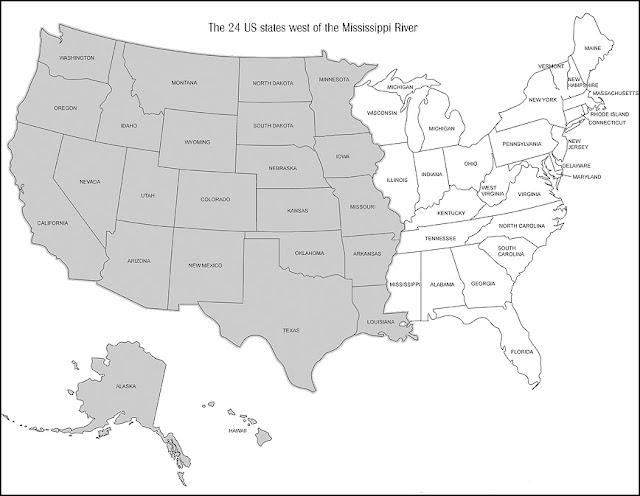 Friends, turning 45,000 horses loose throughout the 22 states West of the Mississippi river means putting 2,045 horses in each state to fend for themselves. Now, no one can tell us that 2,045 horses and burros running free spread out over hundred's of thousands of miles in each Western state would be an environmental impact to anything, or a budget problem. If someone tries to tell you that -- you know they're lying!

And as for where do we get the money to transport these 2,045 horses to each state? Well how about we use the $49 Million that are already allocated and will be used to house and feed them in the holding pens that they're in right now. Besides, once they are gone -- the problem is solves and no horses die needlessly.

If the BLM says it can't be done, than ask if that BLM political appointees, or any other BLM officials, have any connection to those slaughter contractors wanting to buy the horses for slaughter? Is there corruption here? I believe there is!

This has happened on a much smaller scale, but it has happened where BLM officials were getting kick-backs from horse slaughter contractors. Yes, bribes and payoffs have taken place in the past?

If we find connections to slaughter contractors or any other conflict of interest, that find out why they aren't being investigated and in prison? Friends, this has happened before and nothing was done about it because of political cover. But this time, this is huge! Yes, killing 45,000 horses is a very big deal.

So what else can we do? Well, most of all, we need to contact our Congressmen and women -- and ask why isn't Congress investigating this before it takes place? Their investigation can save the lives of those 45,000 horses.

Let's get after this and not let the Obama administration kill 45,000 of America's Wild Horses!

Tom Correa
Posted by Tom Correa at 3:03 AM