Dudes In The Old West 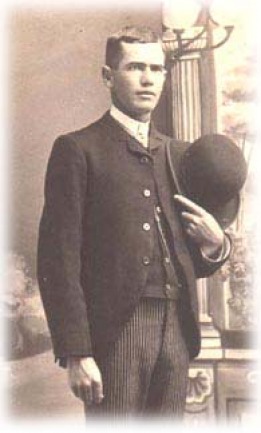 A reader recently wrote to ask why the word "dude" is used derogatorily in Western movies? He said he was a watching an old Western on television and every time someone said "dude," it was said "with total disdain."

The word "dude" is sort of a sore spot with me. Frankly, I hate the word. I truly hate it. My hating the word "dude" goes back to when I first came to California while a teenager. It didn't take me to long to see that a lot of California people like calling others "dude."

As soon as I arrived from Hawaii, I wanted a job. As a result, I found a job with Hayward Area Recreation Department cleaning a couple of parks on the weekends. Yes, I was the kid who picked up after the Hippies who said they loved the earth yet trashed the parks. Yes, the same Hippies that bathed their kids in the park's toilets.

It was there in 1972 that I watched drugged out "wasted" Hippies and other druggies interact with each other and beg for change. So for me, the term "dude" always reminds me of some space-case on drugs panhandling and begging, as in, "Hey Dude, got any change man. I want to score a joint dude."

In the early 1960s, "dude" became prominent in what was called the Southern California surfer culture. Also in the 1960s, the term "dude" started to evolve to mean just about any male person. It was a meaning that slipped into mainstream American slang in the 1970s. The term "dude" was widespread by the late-1970s.

I remember when I was in the security business, a young man came up to me and said, "Hey dude, some dude is stealing my car. What are you going to do to stop him dude?"

My first thought was, "Dude huh?" My next response was, "Dude, like nothing dude, go call a cop!"

The word "dude" is actually an old word, recognized by multiple generations as a term used for a well-dressed man who is unfamiliar with rural life, someone from the city who is in the country. Yes, the word was used to refer to Easterners. It was a term used in reference to a man with "store bought clothes" and citified ways.

Many years ago, Western movies and television writers did get it right when they had actors use "dude" derogatorily. It really was said "with total disdain" back in the Old West, usually by cowboys and frontiersmen who saw "dudes" as being a lot less than enviable.

In the Old West, the word was used by cowboys to unfavorably refer to city dwellers or even a townie. It was also a term for a "sharpie" -- a dishonest and cunning person, a con artist, a cheat.

Of course from the 1870s all the way up to the 1950s, a "dude" primarily meant a person who dressed like a city boy, a sort of a dandy, a "citified" male, a person who was visiting rural America and stuck out like a sore thumb. Yes, a city slicker!

In the popular press of the 1880s and 1890s, "dude" was a new word for "dandy" which of course meant an extremely well-dressed citified male.  A "dandy" was a man who paid particular importance to how his appearance. He was seen as man who was excessively vain. While some say he was concerned about his dress, appearance, and his manners, many out West referred to Eastern snobs as "dudes".

And yes, some back in the Old West thought gamblers and traveling salesmen known as "drummers," bankers, and others who dressed in sack suits and looked "pretty", were dandies or dudes. Believe it or not, there were a lot of people who saw gamblers like Luke Short, Bat Masterson, the Earp brothers, as dudes because of their "soft" occupations. the way they dressed, and the con men and criminal class that they associated with.

And yes, believe it or not, if shown the picture below most would have thought that the members of the Wild Bunch dressed like "dudes". 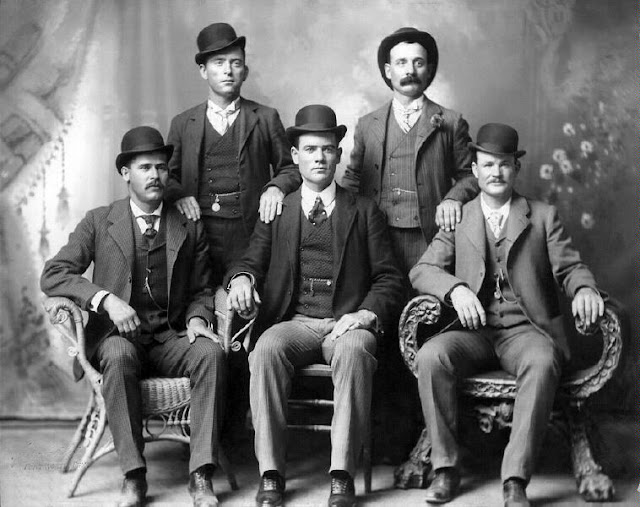 Yes, if you didn't know these guys were outlaws, back in the Old West you'd probably think they were just "dudes" from a city back East.

While cowboys in the 1870 and 1880s were known to like bright colorful shirts and did in fact dress to impress young women, a cowboy was definitely not a dude. A cowboy dressed his best to impress the ladies when going to town or a social, his work clothes when dealing with horses, cattle, dust, dirt, sweat, and hard work was not exactly his "Sunday best." No, he was no dude.

As for as a cowboy or farmer getting into his "Sunday best," that meant he was dressed in the best clothing that he had. And yes, getting dressed in fancy clothes also meant getting "all duded up". Yes, it was a version of the word "dude" that's still in use occasionally in American slang today.

But all in all, the word "dude" was used to refer to Easterners and referred to a man with "store bought clothes". And yes, the word was used by cowboys to unfavorably refer to the city dwellers.

In The Home and Farm Manual (1883), author Jonathan Periam used the term "dude" several times to denote "an ill-bred and ignorant, but ostentatious, man from the city." Most cowboys of the time would have agreed with that.

The implication of an individual who is unfamiliar with the demands of life outside of urban settings gave rise to the definition of dude as a city slicker, or an "Easterner" who is in the West. Because "dude" was also used by ranch-and-homestead-bound settlers of the American Old West to describe the wealthy men of the expansion of the United States during the 19th century, the word "dude" also became synonymous with someone coming West for enjoyment and fun instead of hard work.

This use is reflected in the term "Dude ranch," which of course is a "guest ranch" that caters to folks from the cities who seek more rural relaxation and short lived country experiences. Yes, country experiences that they can take back to the city and brag to their friends about.

Dude ranches began to appear in the American West in the early 20th century. They were for wealthy Easterners who came to experience the "cowboy life."

In the 19th and early 20th century, it was very common for working ranches to take in guests from the East during the "tourist season" as a way to supplement their income. In those days those ranches were still raising and slaughtering cattle or sheep as their primary business. With just a little hospitality, a dude came away with all sorts of adventures to tell the folks back in the city.

So successful were dude ranches in America that in 1926 the Dude Ranchers’ Association (DRA) was created. And since then, yes there are more Dude Ranches, also renamed Guest Ranches, than ever before. And yes, today, as amazing as it sounds, dudes and "dudettes" can experience the West by visiting Dude Ranches and actually paying those places to do the work of ranch hands and live in a sparsely furnished bunkhouse. Imagine that.

While the term "dude" still mean "city-slicker" to some, it shouldn't be mistaken with a "Greenhorn" or "Tenderfoot." These terms are apples and oranges. They are not the same.


It is commonly accepted that most "dudes" believe themselves smarter and more sophisticated than cowboys, farmers, and rural folks. They see cowboys and farmers as inferior to them on the social ladder and would never ever think of becoming one of them. They loath rural Americans and see many of us as "hicks." And yes, this was especially true in the late-1800s.

Back in the early to mid-1800s, a "tenderfoot" was originally a cattleman's name for an imported cow. Later it became the name for people new to ranches and the country life. Same as with the term "pilgrim". All in all, a "tenderfoot" is a newcomer, a novice, especially a person unaccustomed to the hardships of pioneer life. Some called him a Monkey-Ward cowboy, a mail-order cowboy, a flat-heeled puncher, among other things one would call a wannabe-cowboy.

There is not much difference between a "tenderfoot" or a "greenhorn." These are people new to rural life, especially that of the cowboy life. But, even though that's the case, what makes them polar opposites of dudes is that they do have a desire to assimilate.

A "greenhorn" is usually inexperienced, maybe a little naive, mostly a newcomer to cowboy work, a person who makes a lot of mistakes and does things wrong, someone who is unacquainted with local manners and customs of rural America and ranch life. But like the "tenderfoot," they also want to be a part of the community or be good at their job.

My grandpa once told me, "Every cowboy starts out a greenhorn in some way simply because he doesn't have the experience yet. But even with experience, though not a greenhorn anymore, a good cowboy, a good hand, never stops learning."

Cowboys once saw dudes as city slickers who think they know it all and are never open to learning what others can teach them. And that's especially true since many a dude visiting the Old West arrived with the attitude that "there's nothing to be learned from poor farmers and uneducated cowboys."

That may be why many in the Old West believed that a visiting dude really didn't care to be a part of things. It may be because dudes really saw themselves above others, snobs who saw country folks as less then them. And there stands the difference between a greenhorn who has the desire to be a cowboy and that of a dude who doesn't.

Where a greenhorn will one day be a cowboy if he keeps at it, a dude is just a dude and will always be a dude from the city.