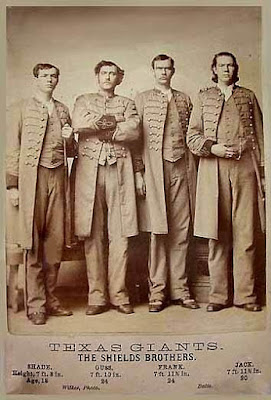 There were four Shield Brothers from Texas. They served in the Civil War on the side of the Confederacy. They were considered "Texas Giants" because they were all over 7 feet tall.

The story goes that this was done because of the amount of gold dust that would fall on the floor. The sawdust was used to hide the fallen gold dust. At the end of each night, it and was swept up and the gold dust was separated.

Hilario Hidalgo and Francisco Renteria were hanged on July 31, 1903, at the Yavapai County Courthouse in Prescott, Arizona.

The Los Angeles Times reported the hanging as follows: During the reading of their death warrant one of the condemned cried out — “I have heard that repeated so often that if it was a song I would sing it to you,” — and with “perfect nerve” checked out, calling only “Adios! Adios!” from the scaffold.

It was the last hanging in Prescott, Arizona.

James Black was an Arkansas blacksmith and the creator of the original Bowie knife designed by Jim Bowie. Bowie was already famous for knife-fighting from his 1827 sandbar duel. But his killing of three assassins in Texas and his death at the Battle of the Alamo made him, and the blacksmith's knife, legends.

James Black's knives were known to be exceedingly tough yet flexible. Black kept his methods for creating the knife very secret and did all of his work behind a leather curtain. 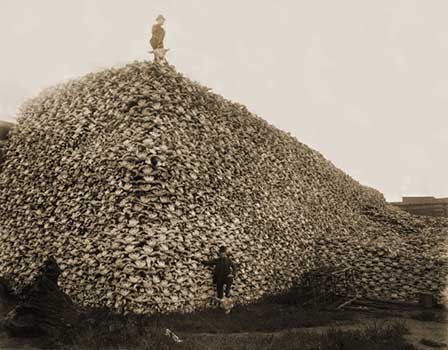 The skeletons of Buffalo were strewn across the Great Plains after the mass buffalo hunts between 1870 and 1883. Eastern firms bought them up, gathered them, and use them the production of fertilizer and bone china. "Bone pickers” earned eight dollars a ton for the bones.

The famous Reno Gang's claim to fame is that they are responsible for the first American train robbery. They are the first to rob a moving train and to net nearly $13,000 for their trouble. Some sources credit the Reno Gang for inspiring other train robbers such as the James Gang and others.

And yes, America’s first train robbery took place on October 6, 1855 in Jackson County, Indiana, and not in the West as some think. The two bandits, John and Simeon Reno robbed the Ohio and Mississippi Railroad.
During the Civil War, Frank and John Reno were Union Army "bounty jumpers." Those were Army soldier who signed up for the enlistment fee but then disappeared only to re-enlist elsewhere under a different name to collect a new fee. Most "bounty jumpers" tried it more than once.

Of course they were also considered Union deserters. There are questions if Reno brother Simeon was a bounty jumper. There is proof that he was definitely was a deserter. William Reno apparently deserted for a brief enough time to return and be granted an honorable discharge from the Union Army. He is the only Reno brother to have the distinction of having an honorable discharge.

Estimates of how many people lived in North America before the arrival of the European explorers vary from 8.4 million to 112 million. This population was divided into about 240 tribal groupings speaking an estimated 300 different languages.


Born in California in 1859, Charlie Meadows is often called "Arizona Charlie" because he started calling himself that after his family moved there when he was a teen. He wore his hair long for a theatrical effect, and he claimed to be the best sharpshooter in the West.

Of course, if he were a good shot, it is surprising that Bill Cody never used him as one instead of as a wrangler in his Wild West Show.


Yes, in reality, he was just one of the many cowboys hired on by Bill Cody for his Wild West Show. One report that I read said that Meadows found dressing up as an extra exciting.

In fact, he loved acting so much that he opened up his own traveling Wild West Show and billed himself as the "King of the Cowboys". That was before going to Alaska during the gold rush there. There he made enough money to built a theater to preform rope tricks and hire entertainers. But as fate had it, he finally went bust in a card game.

The Oregon Trail, from Independence, Missouri to Fort Vancouver, Washington measured 2,020 miles. An estimated 350,000 emigrants took the Oregon Trail. Out if the those, 1 out of 17 would not survive the trip. The most common cause of death was cholera. 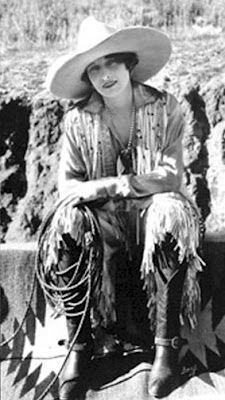 The cowgirl above is Vera McGinnis. She was the first cowgirl to wear pants in the rodeo arena. That took place in 1918. Vera was a World Champion Rodeo Trick Rider and Rodeo Relay Rider.

In late 1849, the famous Kit Carson led the pursuit of a band of Jicarilla Apache who had kidnapped Mrs. J. M. White and her child from an emigrant caravan. The story goes that Carson and a company of Taos soldiers tracked down and killed the Apache, but they were too late to save Mrs. White.

She was found with an arrow through her heart. Along with Mrs. White, Carson's group discovered a Dime Novel lying near her body. The Dime Novel featured Kit Carson as the hero of a story where he single-handedly fought off eight Indians.

During his life Wyatt Earp operated saloon in Nome, Alaska. In the late 1890’s U.S. Marshal Albert Lowe slapped an intoxicated Earp and took his gun away after Wyatt threatened to demonstrate how guns were handled "down Arizona way." This is just proof that the myth that Wyatt Earp didn't drink is just a myth.

Last but not least, Thomas "Black Jack" Ketchum holds the dubious distinction of being the only person ever put to death in the New Mexico Territory for the offense of "felonious assault upon a railway train".

And there you have it.