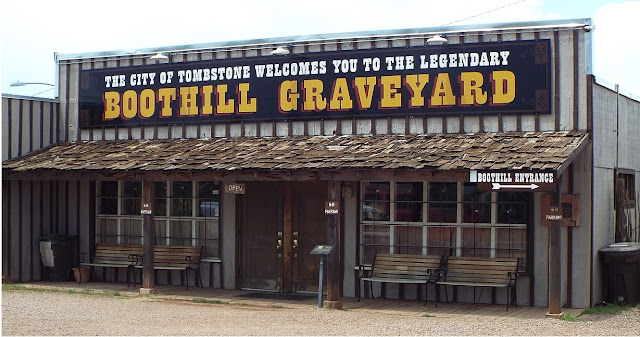 A reader has me laughing. What has me laughing so much is how my reader worded his letter. He states, "Hello Tom, since you don't care who you offend in your blog, and because you seem to enjoy pissing people off, I want to know if the graves makers in Tombstone's Boothill cemetery are fakes?"

And no, he doesn't stop there. But instead of going into the rest of it, I will simply say that he thinks that I purposely set out to "aggravate and insult" my readers with "horseshit about the Old West." Imagine that.

But that's OK, I've gotten worse mail and comments. Besides, since I don't know if he was merely being funny, or maybe sarcastic, or if he really is serious, let's talk about a few "Fake Graves" in Tombstone's Boot Hill cemetery.  Yes indeed, there are a few, not many, fake graves there.

As most know, the name "Boot Hill" or "Boothill" had been used for a lot of graveyards throughout the West. The name "Boothill" was used to symbolize those buried there who had "died with their boots on." That term is supposed to mean someone who died an unexpected death such as in a gunfight.

The term "Boothill" was used by a lot of Dime Novelists. Also, newspapers of the times used it a great deal before Hollywood picked it up and ran with it. Tombstone wanted to capitalize on its newly created Hollywood fame in the 1930s. So as a way to attract tourists, there are a few graves that are faked. For example: 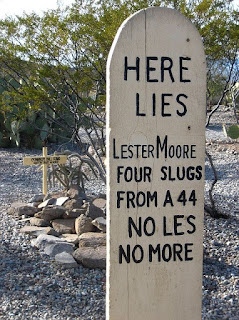 Lester Moore has a very famous epitaph which states, "Here lies Lester Moore, Four slugs from a .44, No Les No more." Lester Moore himself was supposed to have been a Wells, Fargo & Co. station agent in the border town of Naco. He was supposedly in a gunfight with Hank Dunstan over a package that was mishandled.

The problem with the Lester Moore tale is that no one can find proof that there was ever anyone named Lester Moore who was killed in Pima County, or in Cochise County when it broke off of Pima in 1881. And as for his supposed killer Hank Dunstan, there's no evidence of such a person who is said to have also died in the supposed shootout.

Another fake grave marker is that of "Fiderico Doran". His real name was Federico Duran. He's said to have been killed by Sheriff John Slaughter after the Agua Zarca train robbery in 1888. The problem is that Sheriff Slaughter had nothing to do with Duran's death.

Frederico Duran and Jack Taylor, who was Duran's partner and fellow train robber, were actually executed by a Mexican firing squad in Guaymas, Mexico, in December of 1889. So while there's a grave marker in Tombstone's Boothill said to be where Duran is buried, Duran is actually buried in Mexico. 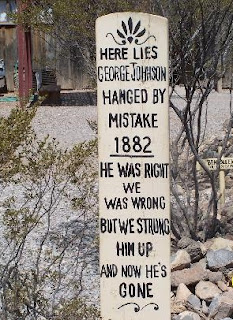 George Johnson's marker has the epitaph, "Here lies George Johnson, hanged by mistake 1882. He was right we were wrong. But we strung him up and now he's gone."

There is one story that goes George Johnson was hanged for being in possession of a stolen horse. Supposedly he bought it not knowing it was stolen. When found, he was hanged. Another story is that this is a fake grave marker for the tourists who visit there.

While I couldn't find a picture of it, there is a fake grave in Tombstone's Boot Hill that's supposed to be where Thomas Harper rests. He has a marker there. Harper's story is sort of interesting in that it goes to the old saying that "you just can't trust some folks."

He arrived in Tombstone in 1879. He was said to be a known thief and killer who was an associate of the Clanton gang. In September of 1880, while in Huachuca, Tom Harper agreed to collect a $10 debt which was owed to John Talliday. Instead of turning the money over to Talliday, Harper instead kept it and spent it. Not surprisingly John Talliday became angry and demanded his money. Harper is said to have shot and killed Talliday in the Huachuca Mountains.

Harper was tried and convicted of Talliday's murder, and he was sentenced to hang. He was executed on July 8th, 1881, in Tucson. While there is a marker in Tombstone's Boothill where he is said to be buried, he's actually buried in Tucson. 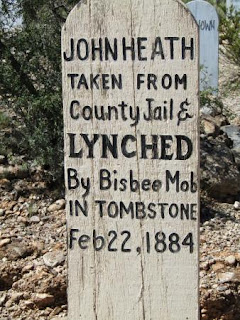 John Heath's marker is there, but it's a fake. He was accused of being the ring leader of the robbery that turned into the Bisbee Massacre that took place on December 8th, 1883. His grave marker is right there near the grave markers of the other five killers who participated in that massacre.

John Heath was arrested, tried, and convicted of a compromised charge of manslaughter. Judge Pinney sentencing him to life in Yuma Territorial Prison.

Heath may or may not have thought he'd see parole sooner or later, but who knows. As for about 150 men in Cochise County, they were not satisfied with him only being convicted of manslaughter and saw his getting paroled sooner or later a very real possibility.

Of course those men were angered even more with their knowing that Heath was awaiting an appeal of his conviction on a technicality. They knew that an appeal may have set Heath free to walk and get away with it.

So on February 22nd, 1884, those 150 or so men broke into the Cochise County jail which was located at the bottom of the Tombstone Courthouse. After disarming the jailers, those very angry citizens, which many have called a "lynch mob," took Heath at gunpoint from the jail. They actually left his five accomplices in jail. They had been convicted and were awaiting a hangman's rope in March.

It's said that the citizens were exiting the jail with Heath when Cochise County Sheriff Jerome L. Ward attempted to intervene. The citizens pushed him aside and took Heath down Toughnut Street. They lynched him from a telegraph pole at the corner of First and Toughnut Streets.

His last words were, "Boys, you are hanging an innocent man, and you will find it out before those other men are hung. I have one favor to ask. That you will not mutilate my body by shooting into it after I am hung."

The citizens agreed, and then blindfolded him. They placed a noose around his neck and then a few citizens hoisted Heath by rope until he was suspended beneath the top of that telegraph pole. Heath is said to have slowly strangled and he fought death. It's said when his body finally stopped twisting and jerking, that someone placed a placard on the telegraph pole which said:


JOHN HEITH
Was hanged to this pole by the
CITIZENS OF COCHISE COUNTY
for participating in the Bisbee massacre
as a proved accessory
AT 8:00 A.M., FEBRUARY 22, 1884
(Washington’s Birthday)
ADVANCE ARIZONA!

The Cochise County Coroner was Dr. George E. Goodfellow, who is said to have witnessed the hanging. When he filled out the paperwork on Heath's death, he reflected the sentiment of the town when he ruled that Heath died from "Emphysema of the lungs which might have been, and probably was, caused by strangulation, self-inflicted or otherwise, as in accordance with the medical evidence."

So now, while there is a grave marker for John Heath in the Tombstone Boothill Graveyard today, there is no body under that pile of rocks. Fact is his body was returned to his estranged wife in Terrell, Texas. He is actually buried there in Terrell, Texas, at its Oakland Cemetery.

As I said earlier, because of the sudden popularity of Tombstone in the early 1930s because of Hollywood, the people responsible for the city of Tombstone renamed the Old City Cemetery to "Boothill Graveyard." It was done in an effort to please tourists who wanted to visit "Boothill".  Some of the graves have been faked all for the sake of tourism.