So now you're looking at the accompanied picture of a wild hog and asking what's that about? Well, last November, a close friend Kevin Haight and his dad and brother all went on a long awaited hunting trip. After 3 days, they all returned with the great news that they all got their boars. Kevin's was the biggest of the three. His came in at almost 300 pounds. So now, his freezer is filled.

When he was telling me about the trip, he told me about how at one point his dad Jeff shot a boar but the wild hog did something strange. After being hit, the wild hog turned and charged his father. Fortunately, his dad remained calm. Then at just less than 50 yards away, my friend's dad put a round directly into the oncoming boar's head.

While the round traveled through the boar and exited out its ass end, it was proof that such things take place more than some folks think. Of course if people don't think boars can be deadly, think again.

The 50-year-old hunter was said to be on the boar hunt with a dozen other hunters near the northeastern town of Greifswald. Germany has a huge wild pig problem. It is such a problem that while about 500,000 wild boars are killed each year there, that's not enough to stop the population from growing. If that sounds like what going on in Texas and other states in the South, it is.

As for the man who was killed? Witnesses said that he fired off a shot and then moved into some reeds. It was there that he apparently came face to face with the wild pig. After the struggle he suffered serious injuries to his left thigh and fell into nearby water. He was retrieved and rushed to a hospital, but sadly he died at the hospital.

If for some reason there is someone out there reading this who thinks this is a modern phenomena, it isn't. For example, there's the story of the hunter who is believed to have killed a moose back around 1905. No one knew that he killed that moose until 1923.

After finding the skeleton of the moose, it became obvious as to what happened. The hunter died in the process of killing the moose after it charged him.

We know about this because the story was reported by The Daily Inter Lake newspaper out of Kalispell, Montana. The first article about this was written in their newspaper back on July 16th, 1923: 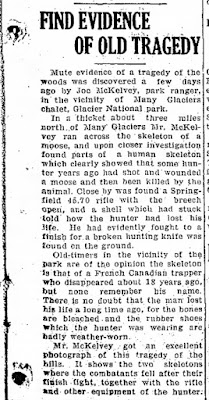 Mute evidence of a tragedy of the woods was discovered a few days ago by Joe McKelvey, park ranger, in the vicinity of Many Glaciers chalet, Glacier National park.

In a thicket. about three miles north of Many Glaciers, Mr. McKelvey ran across the skeleton of a moose and upon closer investigation found parts of a human skeleton which clearly showed that some hunter years ago had shot and wounded a moose and then been killed by the animal.

Close by was found a Springfield 45.70 rifle with the breech open, and a shell which had stuck told how the hunter had lost his life. He had evidently fought to a finish for a broken hunting knife was found on the ground.

Old-timers in the vicinity of the park are of the opinion the skeleton is that of a French Canadian trapper who disappeared about 18 years, ago, but none remember his name. There is no doubt that the man lost his life a long time ago, for the bones are bleached, and the rubber shoes which the hunter was wearing are badly weather-worn.

Mr. McKelvey got an excellent photograph of this tragedy of the hills. It shows the two skeletons where the combatants fell after their finish fight together with the rifle and other equipment of the hunter.

Below is that photograph taken by Joe McKelvey after finding the remains of both the moose and the missing hunter. 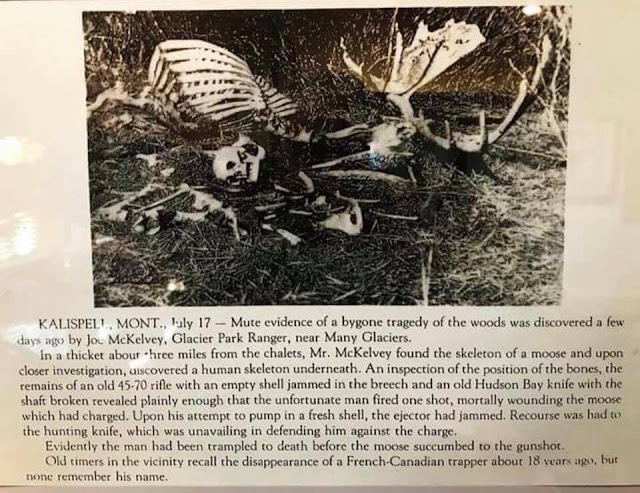 KALSPELL, MONTANA, July 17 -- Mute evidence of a bygone tragedy of the woods was discovered a few days ago by Joe McKelvey, Glacier Park Ranger, near Many Glaciers.

In a thicket about three miles from the chalets, Mr. McKelvey found the skeleton of a moose and upon closer investigation, discovered a human skeleton underneath. An inspection of the position of the bones, the remains of an old 45-70 rifle with an empty shell jammed in the breech and an old Hudson Bay knife with the shaft broken revealed plainly enough that the unfortunate man fired one shot, mortally wounding the moose which had charged.

Upon his attempt to pump in a fresh shell, the ejector had jammed. Recourse was had to the hunting knife, which was unavailing in defending him against the charge.

Evidently the man had been trampled to death before the moose succumbed to the gunshot. Old timers in the vicinity recall the disappearance of a French-Canadian trapper about 18 years ago, but none remember his name.

When I was telling my friend Kevin about the story of the hunter versus the moose, he said that he couldn't imagine trying to get out from under a dead moose that probably weighed a ton. Even if that hunter was still alive and broken up, the weight of that moose much have been way to much to get out from under.

As for the ejector jamming on the hunter's 45-70? His being found with a "45-70 rifle with an empty shell jammed in the breech" and his "attempt to pump in a fresh shell, the ejector had jammed"? While I don't know what sort of rifle or ammunition that hunter was using, it does remind me of the story of what happened to Custer's soldiers at the Little Bighorn.

In 1983, a grass fire burned the Little Bighorn battlefield right down to the dirt. The results of that fire enabled something to take place for the first time since those fateful days back in June 25th and 26th of 1876, when 268 U.S. Army soldiers were killed there.

The result was that for the first time, forensic archaeologists were able to explore the battlefield in depth. And in the process, they dug up thousands of expended copper-cartridge cases and other artifacts. The spent cases were sent to the FBI forensic lab for examination.

The forensic examination results showed that the old myth of those troopers being massacred because their copper-cased Springfield .45-70 cartridges jammed in their carbines was only partly true. Fact is, of the over 1,700 cases of the .45-70 shells that were recovered, it was found that about only 1 percent showed signs of being pried from a rifle chamber. 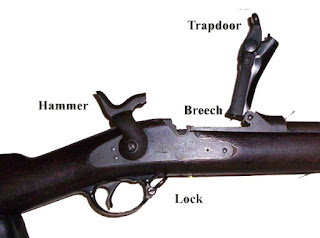 The Springfield Trapdoor Model 1873 rifle that was carried by Custer's men at Little Bighorn was known to fire as many as 13 rounds a minute of .45-70 caliber ammunition. That rifle has a top-loading hinged breech. It originally used copper-shells that had a habit of expanding when fired. That shell expansion is what caused the weapon to jam. When a soldier experienced a jam, he would usually use his knife to manually pry out and remove the spent shell. Imagine having to do that during a combat situation!

Of course failure to clear the weapon of a jam meant that the 32 inch rifle was only good as a club at best. So thank goodness that the copper shells were later replaced with the use of brass shells. That small fix of using brass instead of copper stopped that jamming problem from happening. And frankly, there's no telling how many lives that small fix saved.