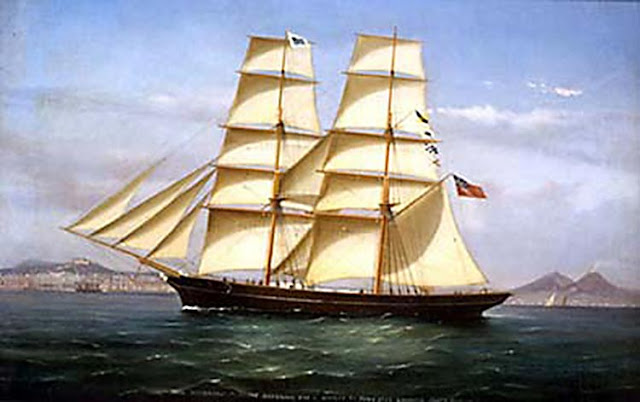 The Frolic was large for a Baltimore Clipper. She was rigged as a brig, her two raked masts each carrying square yards. Although no plans have survived, she is known to have carried a great spread of sail. Her builders, the Gardner Brothers, were among the best of the Baltimore yards.

Baltimore was known worldwide as the home of fast sailing vessels. And yes, The Baltimore Clipper was developed in the early 1800s for speed.

Built at Baltimore in 1844, the Frolic was a wind powered brig owned by Augustine Heard and Company of Boston. While some records show her are 88 feet long with a 24 foot beam and displaced 212 tons, other records say she measured 97 feet on deck, 24 feet of beam and was registered at 209 tons. She was a ship made for a dangerous trade where speed mattered.

That dangerous trade was not one for the faint of heart. She was designed to run opium from India to China. The opium trade required vessels fast enough to outrun pirates and trade rivals, as well as make passages against prevailing monsoon winds. It is said that the Frolic was an exceptional vessel, and her pedigree was second to none when compared to the common herd which came to California. Her captain was Edward Horatio Faucon.

The Frolic, a former opium-runner, was sailing from Hong Kong to San Francisco with a 26-man crew composed of Portuguese-speaking Lascars from India, Malays from modern-day Indonesians, and Chinese. Her master, Captain Edward Horatio Faucon was the same man Richard Henry Dana admired and had made famous as the captain of the Pilgrim in his 1840 classic, Two Years Before the Mast.

Captain Faucon was en route to a San Francisco that had changed greatly since the days of the hide-and-tallow trade. Aboard the Frolic was an emporium of Chinese goods intended for sale in the inflated economy of a booming San Francisco which included many Chinese. Her hold was packed tightly with ornately decorated camphor trunks, fine-colored silks, shiny lacquered ware, tables with inset marble tops, gold filigree jewelry, 21,000 porcelain bowls, candied fruits, silver tinderboxes, a prefabricated two-room house with oyster shell windows, toothbrushes, mother-of-pearl gaming pieces, ivory napkin rings, horn checkers, tortoise shell combs, silk fans, and scores of nested brass weights used by San Francisco merchants to measure their goods. Everything was made in China except 6,109 bottles of Edinburgh ale, brought along to inspire thirsty California gold diggers. Of all the cargo, the ale had come the farthest, nearly two-thirds of the way around the globe.

At 9:30p.m. on July 25th, 1850, the Frolic with her topgallants and topsails set approached the treacherous Mendocino coast. Her captain was intent on reaching the California Gold Rush and San Francisco after sailing 6,000 miles from China.

As the first officer studied the clear moonlit mountains still 20 miles away, the ship drew closer to offshore rocks hidden by the fog ahead of them. Seeing the danger, the first officer rushed below to alert the captain.

But it was too late. As the ship turned vainly to port, her stern struck a rock, snapping off the rudder and splintering open the hull. The ship ran aground on submerged rocks, tearing a hole in her hull and snapping off the rudder, according to a report by Captain Edward Horatio Faucon. The wreck was just south of Point Cabrillo.

This was the Frolic's last voyage. She had run aground just north of Point Cabrillo, between the present-day communities of Fort Bragg and Mendocino up the California coast  about 100 miles north of San Francisco.

It is said that six of the crewmen refused to come down from the rigging, but the rest managed to board two boats and row six miles south to the mouth of Big River.

Once there Captain Faucon and his crew hiked inland for two miles but found no one. And since one of the long boats leaked badly and most of the crew wanted to travel by land, Captain Faucon, two officers, and four oarsmen with a sick Malay rowed the other boat left all the way to Bodega Bay which is just north of San Francisco. It's said that they slept on beaches and ate mussels for stave off hunger.

Meanwhile, unbeknownst to Faucon or his crew, the Frolic was discovered by Mitom Pomo Indians who salvaged ginger jars full of candied kumquats, ginger and among other things, and carried them inland to their camps and villages.

Within hours of Captain Faucon arriving in San Francisco, he was interviewed by the Daily Alta California. The story which appeared the next day ended by saying, "Captain F. reached this place yesterday...The Frolic was bound to this place with a valuable cargo of Chinese goods. The loss is estimated to be about $150,000."

And while some say they were taken captive by Indians, others say they got lost and died from starvation. Either way, those that stayed behind were never seen or heard of again. And to add to the mystery, it's said that they left without taking weapons, clothing, or provisions -- they simply disappeared.

The San Francisco Maritime Museum calls the Frolic "the most significant shipwreck on the West Coast." The story of the Frolic was researched by Dr. Thomas Layton, an archaeologist and head of the anthropology department at San Jose State University.

The significance of the wreck was that the eventual salvage attempt led to the discovery of the redwood forest. The attempt at salvage failed, but the harvesting of the redwoods led to the creation of towns and mills along the Mendocino coast.

Divers discovered the wreck in the 1950s. It was initially thought to be a Chinese junk. In 2003 and 2004 there were formal archaeological survey projects to document the shipwreck. The site is now a California State Underwater Park.

It is said that 125 years after the wreck of the Frolic, an archeological dig of a Pomo Indian Village on Three Chop Ridge near Willits, California, turned up shards of Chinese pottery. It was a true mystery. No one knew how the Pomo had Chinese pottery. The mystery was solved when the connection was made to the Frolic.

This has been compiled from many sources.