The Only Duel Ever Recorded In Los Angeles 1852 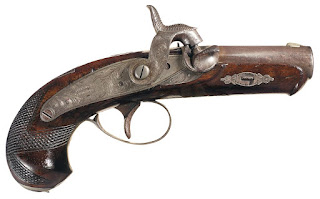 OK, so I keep all sorts of things. This is from a periodical that I've had for a while now. It was originally sent to me, and I thought you might find it interesting, It's printed below just as it was found.

As for the moral of this story? Every once in a while, we just need to see that not every duel's the same. Some expose cowards and cheats, people of low character, for who they really are.

In 1850, Colonel Bankhead Magruder was the Military Commandant of the southern district of California with headquarters at San Diego. The Colonel, a man of imposing appearance, being over six feet in height, of full military bearing, was a congenial soul and when the lonesomeness of San Diego became unbearable he would hie himself to the City of the Angels to raise "whoopee," which he could do in the most approved style.

When Colonel Magruder came to town the sky was the limit in little old Los Angeles. The Colonel often decried to his friends that it was a shame there was no decent American saloon in this town of grog shops, and at last decided to remedy this terrible condition, thereby becoming an originator of several "firsts" in the city's history.

Milled lumber was brought from Maine, around the Horn, and upon its arrival was put together and erected as a two-story building on the lot back of the tiled-roof home of Jose Antonio Carrillo, the site of the old Pico House, still standing.

This building, erected in 1851, was the first wooden building to be erected in Los Angeles, which heretofore had known only adobe in its construction. This was, of course, also the first American saloon. And in 1853. it became the first protestant church when Rev. Adam Bland bought it and there established the First Methodist Church.

Col. Magruder was to become a principal in another "first" in Los Angeles history. Its first and only recorded duel.

In the fall of 1852, upon one of his "rest" visits to the city, the convivial Colonel threw an uproarious party at Harry Monroe's restaurant on Commercial Street, then the principal American business street. After a sumptuous repast had been partaken and much wine of rare vintage had "overflowed," the topic of conversation among the leading business and professional men of the town, gathered at the board, drifted to the subject of " the greatest American."

Thompson Burrell, esteemed Sheriff of Los Angeles, made his toast to "Daniel Webster, the greatest man the world ever produced."

This was too much for one of the revelers, Dr. William B. Osburn, our Postmaster, our Head of Board of Education, our first druggist, and a Deputy Sheriff.

Dr. Osburn was a little man, but important, and at present somewhat inebriated-so, with his cargo of wine, he rose unsteadily to his feet and proclaimed, "My father, who was Sheriff of Cayuga County, New York, was the greatest of all Americans."

This declaration was more than the doughty Colonel could stand and he vehemently replied, "Doctor, you are a damn fool."

No gentleman, and particularly none in Dr. Osburn's frame of mind, could stand such a retort, so he immediately challenged the Colonel to a duel!

The challenge was at once accepted. The combat to take place on the spot. Seconds were chosen, the weapons were to be pistols, and the distance from end to end of the banquet table was chosen. The principals took their places, with instructions that they were to draw at the count of one, to aim at two and to fire at the count of three.

Then the little doctor began to feel that he was being taken advantage of on account of the difference in size between himself and his mighty adversary, so when the count of two was made he blazed away at Magruder, only to be amazed that the gigantic officer still stood, firm and full of life even though it seemed to the Doctor he could have sworn he had seen the bullet from his pistol strike the Colonel's broad chest.

The Colonel held his fire, but took a step to the right, cleared the table, and with pistol aimed at Osburn, advanced slowly toward the far end of the table.

By this time poor Dr. Osburn was chalk white, his brain cleared of its fire. And without ceremony, he threw himself at the Colonel's knees crying, "For God's sake Colonel spare me for my wife and family!"

The Colonel replied in disgust, "Osburn! You are a fool!"

And it was then that it was revealed that the pistols had only been loaded with powder and bits of cork so no one would be hurt. Of course Osburn was shown to be a coward and dishonorable individual, a man of low character.

Such were the days when Americans first came out West to California. The spirit of those adventurers was as wild as their behavior.

Since the report says Dr. Osburn started to "blaze away" at the count of two instead of waiting for three as he should have, I thought the handguns that they were using were actually early revolvers. I thought probably the Colt Navy Model 1851 percussion revolver in .36 caliber, or something similar like.