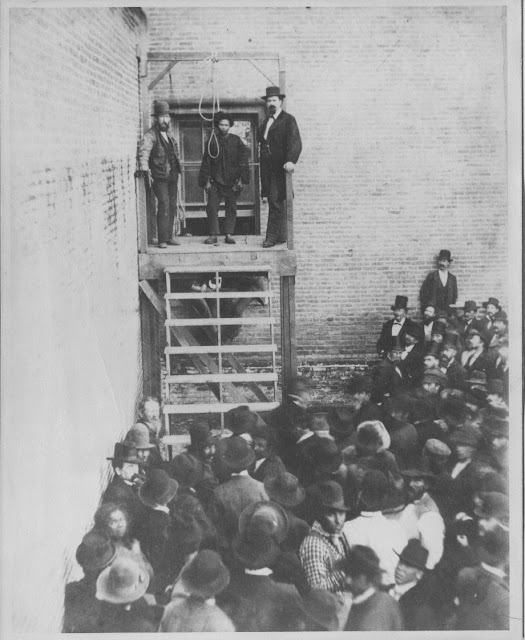 The photograph above is of the hanging of Ah Ben on Friday, March 14th, 1879. Yuba County Sheriff Hank L. McCoy appears on the right and Deputy Ike N. Aldrich on the left.

Ah Ben was a Chinese immigrant, and a killer. He murdered John McDaniel on the night of November 30th, 1878. Mr. McDaniel was the owner of the Marysville California Race Track. The homicide is known as the "Marysville Race Track Murder," but it also called the "McDaniel Murder".

According to reported, it was about 4 a.m. on November 30th, 1878, when John McDaniel was waken by his wife who heard noises as if someone was forcing a door open. Mr. McDaniel got out of bed and was about a foot or two from their bedroom door when he came face to face with Ah Ben. It's said that Mr. McDaniel and Ah Ben fought until the Chinese assailant used an wood chisel to fatally stab Mr. Daniel in the chest.

Below is an excerpt from History of Yuba and Sutter Counties, California. It is titled, Race-track Murder:

"About four o'clock on the morning of November 30, 1878, John McDaniel, lessee of the Marysville race-track, now known as Knight's Recreation Park, and upon which the links of the Marysville Golf Club are located, was aroused by his wife, who heard noises as if someone was jimmying a door on the premises. McDaniel started to investigate, and within a foot or two of his bedroom door encountered a Chinese, who proved to be Ah Ben. It is thought that McDaniel, who was a brave man, seized the visitor, having been robbed a few nights before.

Mrs. McDaniel heard a tussle, and presently heard her husband cry out, "Oh, my God, help ! help !" When she reached him, McDaniel and the Chinaman were still struggling. Although fatally wounded, McDaniel was doing his best to secure his murderer. Mrs. McDaniel pulled the Chinese away, and as she did so her husband staggered into the open, fell, and soon expired from a wound he had received in the breast from an inch-and-a-quarter chisel carried by Ah Ben.

In the hand of the deceased was found a poniard blade, which, it is supposed, he wrenched from his murderer's hand and used in self-defense. The Chinese showed a stab in the left arm, and bruises on his face, proving that the struggle with his victim had been a desperate one.

Ah Ben turned upon Mrs. McDaniel, and she was forced to back away from his grasp. About this time, Ah Joe, Chinese cook in the employ of the McDaniel family, rushed out of the dining-room to her assistance. The murderer, at sight of Ah Joe, started to run; but the cook, at the risk of winning the condemnation of his race, followed and caught Ah Ben.

He knocked the murderer down, hog-tied him, and then brought him back to the house, where he was kept until delivered to the custody of Police Officers John Colford and Mike Hogan. Constable Ezra Brow, who lived in the neighborhood, had been sent for, and he helped in the landing of Ah Ben in the city prison.

That evening an autopsy was held by Coroner George Fronk, assisted by Drs. C. C. Harrington, C. E. Stone, and S. J. S. Rogers, all now deceased. The death-wound was found in the region of the stomach, the chisel having penetrated between the ribs and pierced the liver in its course.

Besides his widow, McDaniel left six children, five of whom are still living. They are Mrs. Henry Blue, wife of Councilman Blue, Mrs. Harry S. Day, and Harry McDaniel, all of Marysville, and Mrs. Charles Day, of Berkeley, and George McDaniel, of Stockton. Another daughter, Mrs. George Crossley, died about two years ago.

Soon after dark on the evening of the same day, a mob organized on the corner of D and Third Streets. During the day the populace had become aroused because of the cruel murder of McDaniel, who was a popular and esteemed citizen. Some said the community would be disgraced if Ah Ben were allowed to live through the day.

At dusk the bell-ringer, a darkey who was employed in those days to spread sudden news and announce auction sales, got busy, and through his efforts a crowd of 300 or 400 assembled. A box had been placed at the intersection of Third and D, from which S. L. Howard, an attorney, made a speech calculated to incite the mob and induce it to proceed to the county jail, break down the iron doors, seize Ah Ben, and hang him.

While the mob was at the height of its fury, Hon. John H. Jewett, Marysville banker, stepped to the box and made an effort to convince the turbulent crowd that they were acting unwisely and imprudently, and should disperse as good citizens. But the crowd manifested true mob spirit by stifling free speech.

Jewett was interrupted by such a noise as to render his remarks inaudible. A. C. Bingham, former councilman, and later mayor, endeavored also to address the crowd, with but little better success.

Bingham resented the cat-calls of the crowd, and for a time it looked as if he would mix things with the offenders. Knowing Bingham to be fearless, the mob gave closer attention toward the close of his address, which was along the same line as Jewett's.

Howard was again called to the box. He made a speech at this time that rendered him liable to arrest. Finally, the meeting resolved to go to the jail and secure the murderer.

A long rope had been obtained, and this was placed in the hands of Howard. Then there was a call, and a question as to who should be the leader. To the shouts "Who shall lead?" came the reply of all the mob, "Howard ! Howard !"

But Howard appeared a better talker than leader of a forlorn hope, and held back. A few men seized him, however, placed him in an express wagon, and ordered the driver to proceed to the county jail at Sixth and D Streets.

When the crowd arrived in front of the courthouse, they halted; and on looking for Howard, they found he was missing. At this critical moment Mayor N. D. Rideout, early-day banker, took a position on the courthouse steps and briefly addressed the crowd, advising law and order.

He told the mob that the jail was strongly guarded, the sheriff firm, and that forcible entry would surely mean the needless loss of valuable lives, which he would regret to see. Mayor Rideout was followed by Sheriff Hank L. McCoy, who appeared on the steps with his chief deputy, Ike N. Aldrich, who later became justice of the peace of Marysville Township. 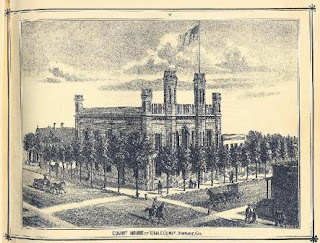 McCoy assured the mob that if Ah Ben were taken from the jail it would not be without bloodshed. At this the mob returned down street, and generally dispersed. They decided that the sheriff meant every word he uttered. Up to a late hour that night, however, there was a disgruntled crowd of twenty or thirty assembled near the end of the D Street bridge, loath to give up ; but they, too, dispersed about midnight.

Ah Ben was tried before Judge Phil W. Keyser and a jury; he was convicted, and sentenced to be hanged in the courthouse yard, as was then the custom.

On Friday, March 14, 1879, the murder of McDaniel was expiated on the gallows before a throng that crowded the courtyard. Many a lad played truant from school, in hope of getting a glimpse of the execution, which many did from the treetops and housetops in the neighborhood of the courthouse. The hanging was well planned and successfully executed.

In an interview with a newspaper man before his execution, Ah Ben, an ignorant individual, declared he would kill McDaniel again under like circumstances.

Please note that I did not edit the above excerpt in any way. It's use of certain words such as "darkey" was not edited out of the excerpt. Since it was a word used in the report and was part of the vernacular at the time it was written, I left it in. 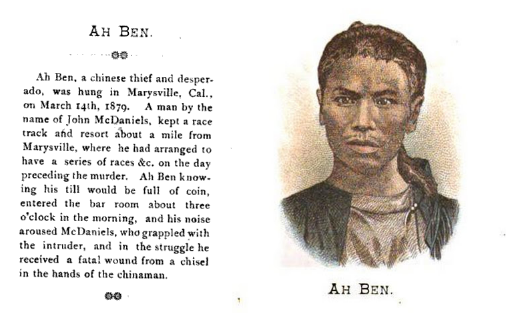 According to the newspaper clipping from the Nevada State Journal, dated December 4th, 1878, Mr. McDaniel was 50 years old originally from Vermont. It also states Ah Ben was a transient new to the area who slept in outhouses and such. His hanging was the last to be preformed in Yuba County, California.

As for the story itself, I thought you might find the swiftness of the trial and how fast the verdict of the court was carried out of interest. Very unlike today.