William Cathay enlisted in the United States Army on November 15th, 1866, in St. Louis, Missouri. Cathay signed up for a three-year engagement and was assigned to the 38th United States Infantry Regiment after passing a medical examination.

Shortly after enlisting, Cathay contracted smallpox and was hospitalized. When rejoining the 38th Infantry stationed in New Mexico, Cathay was having problems due to the lingering effects of smallpox complicated by the New Mexico heat.

Of course, as anyone in the infantry can attest to, marching in the heat takes a toll on a person. Coupled with the effects of smallpox, Cathay was hospitalized more often than not.

It was during one of the stays at the post hospital that doctors finally discovered that William Cathay was actually a woman. Soon the 38th Infantry Regiment Commander was notified of the situation and she was almost arrested if it weren't for her being ill. Once well enough to leave, her commanding officer Capt. Charles E. Clarke officially discharged her from the U.S. Army on October 14th, 1868.

It is believed that two others knew about the deception. One was her cousin and the other a friend. Both of them were also serving as soldiers in the 38th Infantry Regiment.

So who was William Cathay? Well, first of all, while some say she also went by John Williams, the name William Cathay was the name she falsely used to enlist in the Army. Her real name Cathay Williams and she was born a slave in September of 1844 in Independence, Missouri.

During her teen years, she worked as a house slave on a plantation near Jefferson City, Missouri. Then in 1861, after Union troops began their occupation of Jefferson City, she was considered Union contraband. Fact is, during the Civil War, captured slaves were officially designated by the Union as "contraband."

Many of those "freed slaves" were forced into support roles as cooks, livestock tenders, working doing laundry and other cleaning, to serve the Union Army in ways that would free up troops for battle. The more labor the Union got out of the freed slaves the less the Army needed support personnel.

It's said that at 17 years of age, Williams was pressed into service in a support role with Col. William Plummer Benton's 8th Indiana Volunteer Infantry Regiment. During that time, Cathay Williams was part of the 8th Indiana. She traveled with that unit, including moving with them on their marches through Arkansas, Louisiana, and Georgia.

Fact is, she was there at the Battle of Pea Ridge and there during the Red River Campaign. Then she was transferred to Little Rock, Arkansas. After that, she was served in a support role with General Philip Sheridan's command in Washington, D.C.. After the Civil War, she was working at Jefferson Barracks for a time before coming up with the idea to enlist as a man.

At the time, women were forbidden from serving in the military. So when Cathay Williams enlisted in the United States Regular Army under the false name of William Cathay, that was a first for the history books.

After she was discovered and was discharged, life went from bad to worse for her. Right after leaving the Army, she became a cook at Fort Union in New Mexico. She then moved to Pueblo, Colorado, where she met someone and was married. Sadly, the marriage is said to have ended when her husband decided to steal all of her money and their horses. While the marriage was ended, it said she sort of got even by having him arrested.

In Trinidad, Colorado, she made a living as a seamstress and it's believed that she owned a boarding house for a while. It was about then that the story of her enlisting in the Army as a man and serving as such first surfaced.

It's believed that a young St. Louis reporter heard stories going around about a woman former-slave who had actually enlisted and served in the United States Regular Army. He located Cathay Williams and she was more than happy to tell him what took place. After the interview, her life story regarding her military service was published in The St. Louis Daily Times. That was January 2nd, 1876.

By the late 1889's, it's said that she entered a local hospital where she stayed for a long time. Some say it was the horrible effects of smallpox. To help pay for her medical needs, she applied for a disability pension based on her military service. That was in June of 1891. A little of two years later on September of 1893, she was examined by a doctor with the U.S. Pension Bureau. 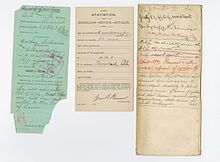 These days when a veteran applies for disability benefits, it's an uphill battle. They say almost everyone submitting for a rating gets denied at first despite the evidence submitted. Well, this is all nothing new.

Despite the fact that there were records of Cathay Williams contracting smallpox and being in the hospital frequently, and despite the fact that she suffered from neuralgia and diabetes, and that she had to have all her toes amputated, and that she couldn't walk without the use of a crutch, the examining doctor said that she did not qualify for disability payments. The examining doctor said that the nature of her illness and disability were unknown. So yes, her application was denied.

It is believed that Cathay Williams died shortly after being denied a pension in 1893. Sadly, the exact date of her death is unknown as is her grave marker. Some say she was probably buried in some Potter's Field where her maker would have been made of wood. So of course, most like her marker deteriorated long ago. And because of that, Cathay Williams' final resting place is unknown.

While she was the first Black American woman to enlist in the U.S. Army, and the only documented woman to ever serve in the Army posing as a man, here's what needs to be remembered about Cathay Williams: She lied to become an American soldier. She served from 1866 to 1868. She was an Infantry Private in the 38th Infantry Regiment. She was the only known active duty woman to serve as a Buffalo soldier.

As for the picture of her above? That is a painting of Cathay Williams by William Jennings from the U.S. Army Profiles of Bravery. While it's a wonderful picture, I really believe it's anyone's guess if she really looked like that since there are no pictures of her when she was young and in the Army.