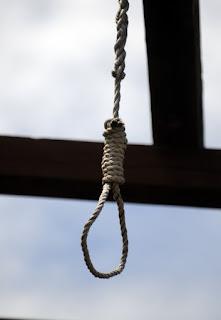 Tom Horn was hanged in Cheyenne, Wyoming, on November 20th, 1903. He was buried in the Columbia Cemetery in Boulder, Colorado on December 3rd, 1903.

Legends says that no one wanted to hang Horn. Because of that, the people in Cheyenne supposedly came up with a brand new way of hanging him so that no one would have to pull the lever. The fact is, that's all myth.

Fact is there was a line of settlers and small ranchers, including the father of the boy that he murdered who wanted to pull the lever on Horn. But though that was the case, Horn was one of the few people who were hanged through the use of a water-powered gallows.

Known as the "Julian Gallows," it was said to be designed by architect James P. Julian of Cheyenne, Wyoming, in 1892. The system was set up so that the the person to be executed was positioned to stand on a trap door which was connected to a lever that pulled the plug out of a barrel of water.

As water flowed from the barrel, it caused a lever with a counterweight to rise. This pulled on the support beam under the gallows. When the beam would break free, it opened the trap and the condemned man was hanged.

It's said that instead of a "humane hanging" accomplished as cleanly as possible, some of the witnesses there at Horn's hanging were said to have been horrified when the noose failed to snap Horn's neck and he instead dangled from the gallows for those long 17 minutes. Then again, it's also said there were people there who wanted to see Horn suffer for killing a 14 year-old boy. Since a number of executions were public events with large crowds, it's a certainty that there were people there who saw justice carried out in a slow painful death.

Of course there were a number of innovations in the way of executing the condemned. Below is an Aspen Daily Times news article published in January of 1891 regarding a similar device as that of the Julian Gallows which was invented in 1892.

The Fate of James Joyce

Denver, Jan. 17 – A special from the penitentiary at Canon City describes a new and novel plan whereby James Joyce will tonight unconsciously commit suicide on the gallows, thereby relieving the warden from disagreeable necessity of participating in the execution.

The problem has been effectually solved by means of a water gauge. This gauge consists of two buckets, one set above the other. When the cork is pulled out of the upper bucket it pours its contents into the lower bucket and raises a float which regulates a dial in the execution chamber.

At the same time the water foaming out of the upper bucket, at the end of a specified time, releases a ball weighing 20 pounds which falls and pulls the trigger that lets the weight fall and jerks the victim in the air.

The machine is set in operation by a rod which connects with a platform standing in the center of the death chamber. When the prisoner comes in his hands are strapped behind him, he is asked to step upon the platform.

As he does so the platform sinks a little and sets the terrible machine in the closet behind him at work. Suddenly, snaplorahl the weight has fallen and the victim is dangling in the air with three feet and a half of vacancy beneath his feet.

This is an example of the attempts made by towns and prisons to look for more humane ways to execute prisoners. Many of the contraptions were also supposed to be ways to relieve the stigma placed on the person having to pull the lever. While some did, some didn't. But then again, such was the life of a hangman.