The Shott vs Nott Willing Gunfights

Since I've been extremely busy trying to get my barn and property ready for winter, here's a short story about a couple of duels which may or may not have actually taken place. As you can see, I've posted the newspaper article where I first learned about one of the gunfights. It was this article that sent me on a search to validate it. After you read it and the rest of the article, you may see why I say it may or may not have taken place.

So please, read this first. I promise you, you will laugh. I also promise that I will tell you the rest of the story at the end. 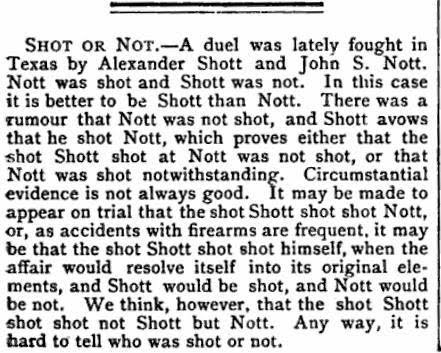 OK, so I hope you had a good laugh!

I've been reading about a duel
A mixed up affair, oh, it's something cruel
It's puzzling my poor brain, and driving me fair insane
A Mister Nott and a Mister Shott, in an argument one day they got
They decided to have a fight, so they met in the pale moonlight
With a pistol each in a lonely wood they quickly got to work.

Then Shott faced Nott - likeshot he shot Nott
'I'll tie Nott in a knot!' he said
Then Nott at Shott took a little pot-shot
Missed, and Mister Shott he shot poor Nott instead
Said Nott, 'I'm shot, though my name is not Shott
You're shot, so you're Mister Nott shot.'
'How can Nott be Shott,' said Shott, 'If Nott's not me?'

I've got a clue to the mysteree
I'll explain it to you - it's like this, you see
Of course, you will understand - and then, on the other hand
They fought a duel - now we've got so far,
Then again, you see -well there you are
You're following me, no doubt. Now, what am I talking about
See, Shott shot Nott, not Shott, see Shott - I wish they'd both been shot.

Now, the Rest of the Story!

It wasn't unheard of for a reporter, especially one trying to make a name for himself to fabricate a story or two, or more. Keep in mind that when Mark Twain was a reporter, he was known to have written a few stories for his papers that were lies. He just made them up. And frankly, something tells me that this may be a similar situation.

Besides, who really knows if this story is true or not? A number of sources give different dates of when Shott shot Nott, and no one really knows where the duel took place. If it was Texas? Where in Texas?

As far as I can determine, it may have simply come from a bored newspaper writer in Philadelphia in the 1840s. Here's another example of the same sort of story that's believed to have come out of a Philadelphia in 1844.

In this case, Shott shot Willing!

So was Shott shot? Was Nott not shot? Was Willing willingly shot or not? Who knows since we can't trust the news, even back in the day!

I hope you have a good weekend!