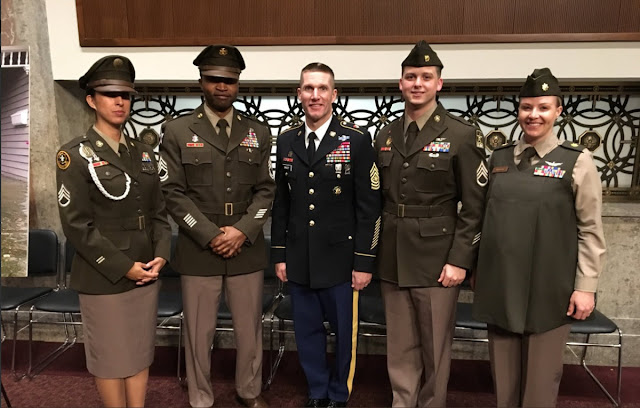 The U.S. Army is adopting the Army Greens as its new service uniform, based on the iconic "pink and green" uniform worn during the World War II. This will be the everyday service uniform starting in 2020, and it will reflect the professionalism of the Soldier.

The Army Greens Uniform will include khaki pants and brown leather oxfords for both men and women, with women having the option to wear a pencil skirt and pumps instead.

There will be a leather bomber jacket as an outerwear option.

The Army Blues Uniform will return to its role as a formal dress uniform, and the Army Combat Uniform also known as the Operational Camouflage Pattern, or OCP will remain the duty/field uniform.

What are the current and past efforts of the Army?

In March 2017, Program Executive Office Soldier (PEO Soldier), under direction from the Chief of Staff of the Army, prepared a "Greens" Uniform demonstration and options to support the decision-making process. Extensive polling data showed overwhelming support for this uniform.

On Veterans Day, 2018, the Army announced the new uniform, which will be made in the U.S., and have no additional cost to the American taxpayer. This uniform will be constructed of high-quality fabrics and tailored for each Soldier. This will be cost-neutral and covered under enlisted Soldiers' annual clothing allowance. The new uniform and associated materials will comply with all Berry Amendment statutory requirements for Clothing and Textiles.

What continued efforts does the Army have planned?

The Army will conduct a Limited User Evaluation (LUE), using Soldiers that interact with the public. These Soldiers will wear the new uniform for a few months and then provide feedback for possible last-minute changes to the final design. The mandatory wear date for all Soldiers will be 2028.

This is the information on the uniform components:

Male Coat:
Dark drab green, four-button design with a belt and likely with a bi-swing back. Officers have ½-inch brown braid

Female Coat:
Similar to the above, but without the top pockets (PEO Soldier acknowledges the difficulty of aligning accouterments without top pockets, but struggles with how to maintain a bust line that lays well when it incorporates top pockets or flaps). The prototype coat is about 2 inches shorter than the current ASU Coat

Male Trousers:
Taupe color and similar to current design, but without trouser braid for enlisted and NCOs. Officers’ braid is still not decided

Female Slacks:
Incorporates side-seam pockets, but no back pockets. Likely will have some hidden waistband pockets to provide added utility for Class B wear. Will likely incorporate a comfort waistband

Female Skirt:
Pencil design with comfort waistband, likely cut with a “V.” Skirt will incorporate a “V” or kick pleat at back hem

Female Shirt:
Similar to the untuck version of the ASU shirt in general design

Ties:
For both males and females, likely the same color as the coat

Overall CSA Guidance:
Make the uniform as functionally comfortable as possible without giving up a sharp, military appearance. Make the female uniforms as close as possible to the male uniforms without compromising female anatomical fit. Reduce the “bling” on the uniform by limiting pin-on items, perhaps incorporating subdued buttons, etc.

Why is this important to the Army?

The reintroduction of this uniform is an effort to create a deeper understanding of, and connection to, the Army in communities where awareness of the Total Army needs to increase.

Loyalty, Duty, Respect, Selfless Service, Honor, Integrity and Personal Courage are core Army Values, and the new uniform is at the center of demonstrating Soldiers' values, professionalism and accountability to each other and the American people.

The Army Greens will be worn by America's next Greatest Generation as they develop into the smart, thoughtful and innovative leaders of character outlined in the Army Vision.

As a personal note, I think this is a great move. I really believe this is the best idea that the U.S. Army has had in more than 50 years. It will create a link to the Army's rich history and traditions of the past while building more of a sense of Esprit de Corps in today's Army. Great move!