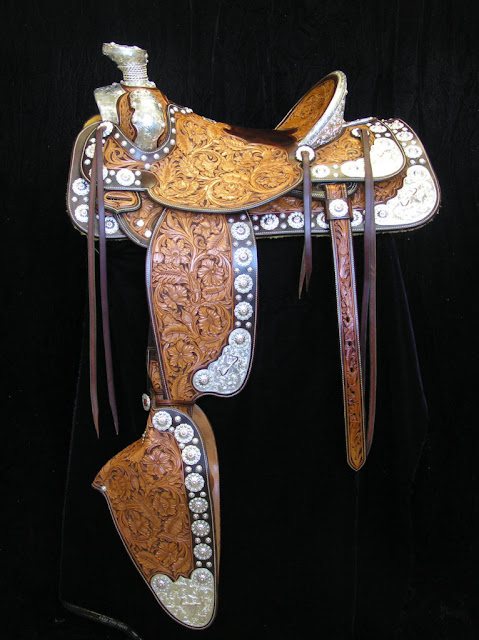 Every once in a while, while researching something on the Internet, I stumble on something that I really want to share with others. In this case, I was looking up leather working when I found saddles made by Doug Cox.

Doug Cox is a saddle maker. But more so, he's a true artist. While he makes handcrafted custom designs for clients and collectors throughout the world, he also has saddles on display in museums.

In fact, the saddle pictured above, Silver Mounted Saddle #1, has been on display at the Carriage House Museum in Santa Ynez, California, The Museum in Paso Robles, California. It was one of the only two contemporary artist works on display at the Art of The Western Saddle exhibit held at the Quarter Horse Hall of Fame in Amarillo, Texas for 16 Months in 2009. 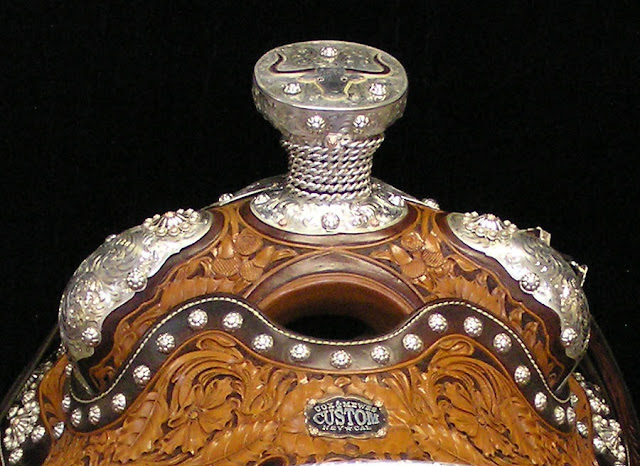 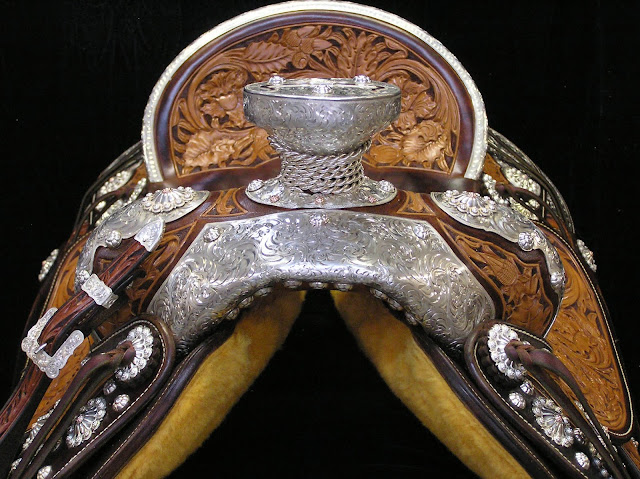 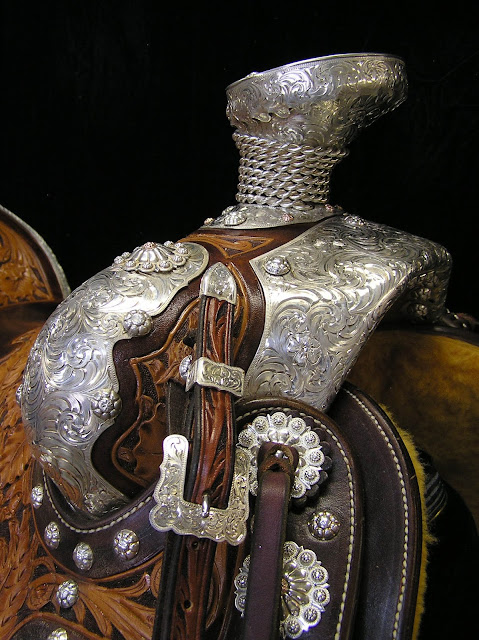 Silver Mounted Saddle #1 above is built on a Will James Stockman style tree, with a semi quarter horse gullet on Doug Cox bars. It has a 13 1/2 inch wide swell, a number 4 dally horn 3 ½ inch high with a 4 ¼ inch cap, a shovel cantle 4 inches high. It has 7/8 flatplate double rigging, medium square skirts, regular fenders with half double stirrup leathers, and quick change buckles. It has slideloop billets with regular 4 1/2 inch wide back cincha with tunnel loops, 2 1/2 inch Visalia monel stirrup in side 20 inch one piece taps.

He also used a Number 4 Mixed flower hand carving with dyed background and borders, and all parts are doubled and stitched, and lined with Number one carving leather. All of the silver mounting are heavy gauge solid sterling silver. The overlaid trim is 12 karat rose gold. 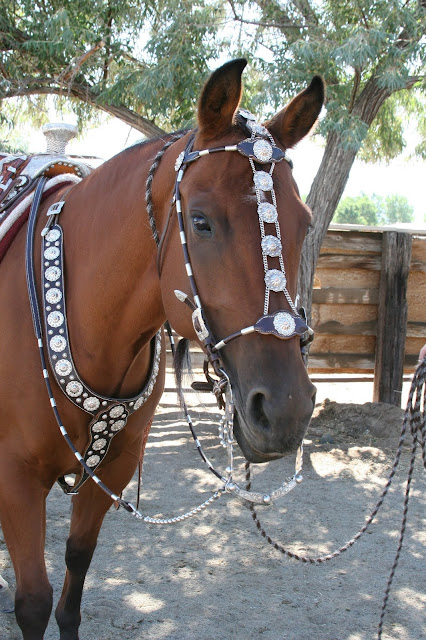 The saddle comes with matching Bridle and Martingale as seen above. It can also be had with a glass museum case for the collectors out there.

Of course his work also includes saddles with beautiful carvings in the old world style of craftsmanship and artistry, but with less silver. Take for example this saddle in his collector series, The Old California, below. 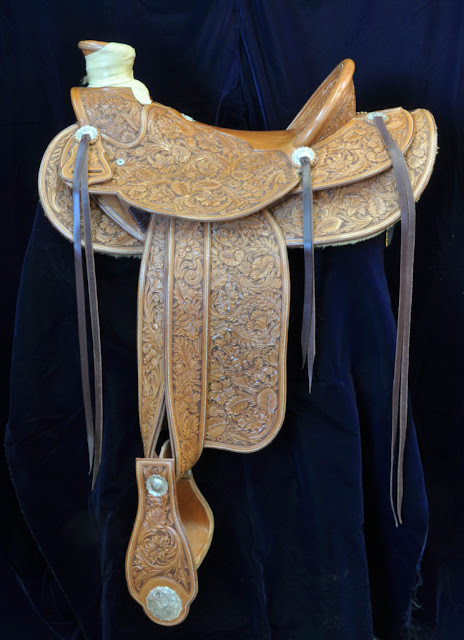 The Old California was made for the Saddle Show at the 25th Anniversary of the Elko Poetry Gathering in Elko Nevada. It was one of twenty-one on display there for months. It's a saddle made on one of the two most famous styles of buckaroo trees, the 3B. This saddle was patterned after the most popular styles of saddles during the peak of the buckaroo heyday.

It's tree is a 3B, 9 inch fork, shovel cantle 4 inches high, a wood post horn 3 1/2 inches high with a 4 inch cap. It has 5/8 single ring rigging, with hand forged stainless steel rings over laid with sterling silver and hand engraved rigging leathers are closed with Spanish lace in true California fashion.

It's California round skirts, California half double stirrup leathers and fenders that lace at top of fenders, all add to it's beauty. It has the old Visalia Grandee style of stirrups with sterling silver bolt heads and large concho at the bottoms on bell bottom style 4 inch wide stirrups. All leathers are doubled and stitched. It has sterling silver sting conchos flower carving is the Number 5 Mixed Flower, and all were free-hand drawn and carved. This is a classic copy of a 1930-40 vintage Visalia buckaroo saddle.

As for his saddles, his patterns are still drawn free-hand and carved deep and lifelike. They are hand set on properly cased leather. Because of that, he never creates two saddles alike. As for his headstalls, they are handmade with No. 1 Bridle leather, the very best quality sewn with waxed linen thread, edged and rubbed smooth by hand to ensure a top quality finish, then oiled and either lacquered or a soap-oil finish put on, his work is always with high quality standards in mind. That includes his hard service headstalls, which are oil and soap finished to maintain a supple nature and turn sweat for extended periods of time.

While his saddles are owned by collectors worldwide, his custom saddles are also for the working cowboy, the rancher, trail rider, and the arena competitor. 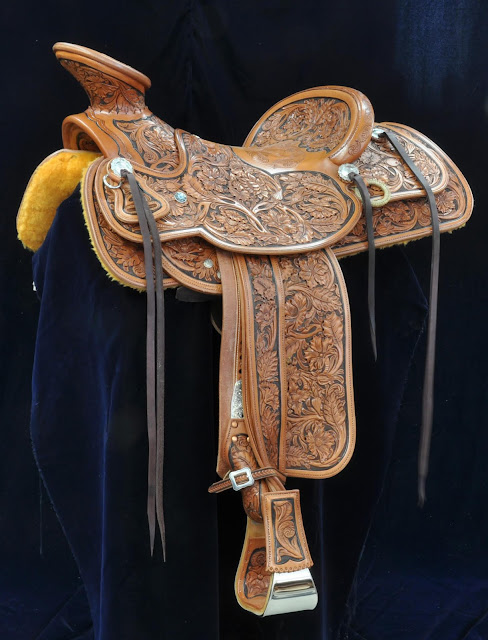 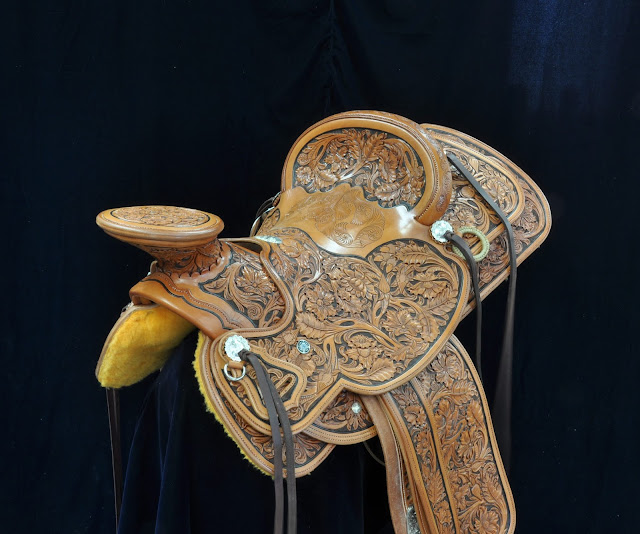 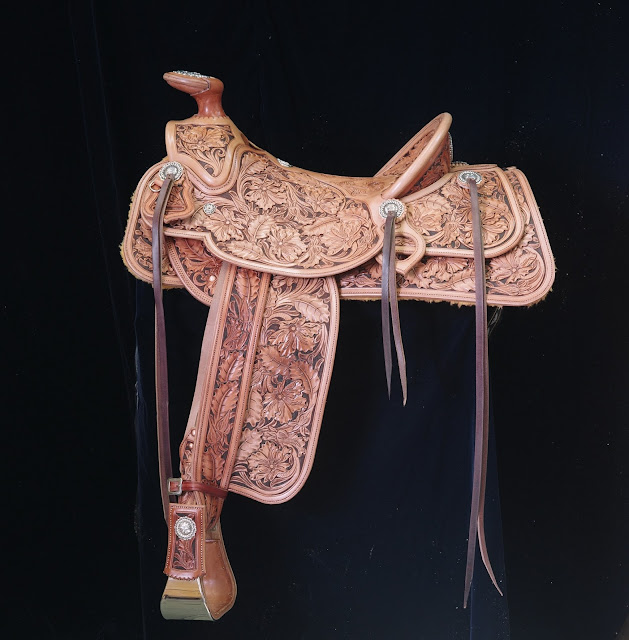 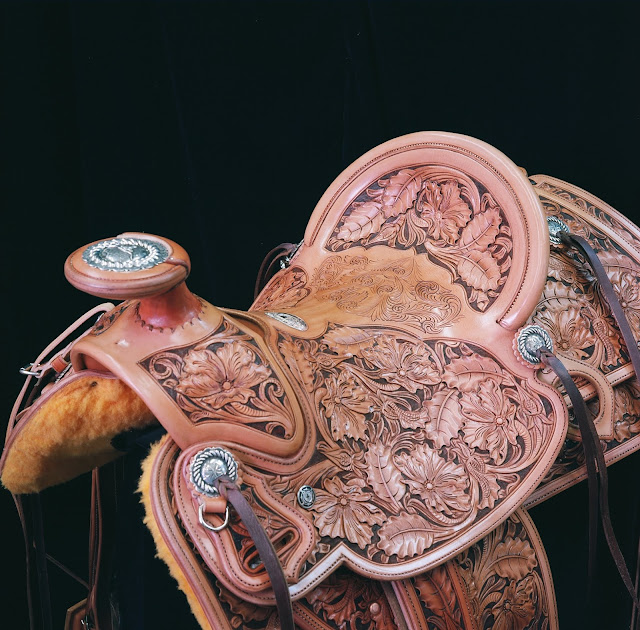 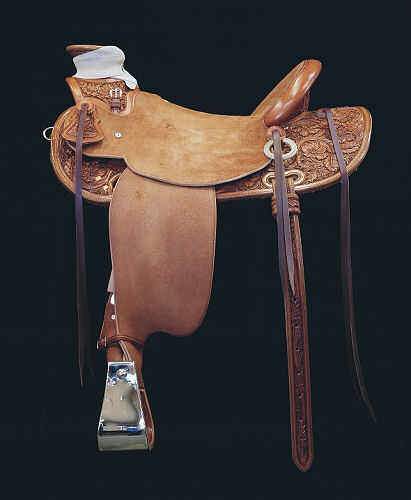 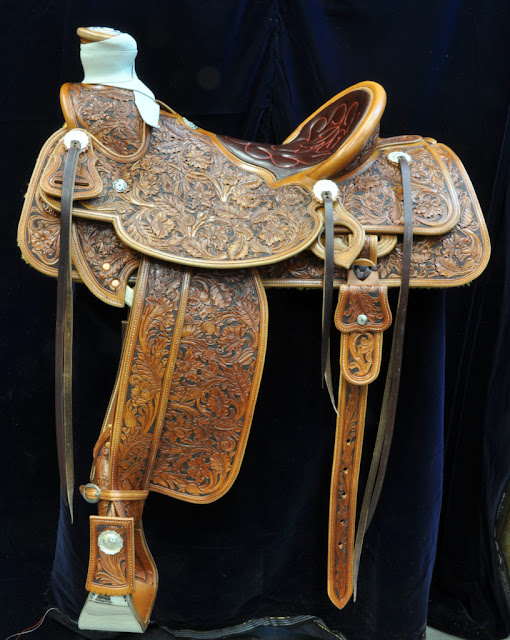 So who is saddlemaker Doug Cox?

He grew up on an Idaho ranch. As with many who grow up on ranches, that experience gave him first-hand knowledge of riding, training horses, and working cattle. As he got older, he gained a great reputation of being a good hand and soon hired out for day work at other ranches there in Idaho, as well as in Utah, Wyoming and Montana. One's reputation is always helped along with hard work and a great work ethic. Yes, both elements of which Doug Cox still has.

That's pretty evident considering during those days he is known to have started his own colts, and he entered reining cow horse and cutting competitions. Of course, as with many young cowboys, he did his share of rodeo bronc riding.

If saddlemaker Ray Holes sounds familiar, it should since he developed a product used by many. The story goes that he needed a conditioner and waterproofing to put on new saddles to help repel rain and the elements. The "dubbin" that he developed also restored life to older leathers. The first Ray Holes Leather Care Product was developed which he called SADDLE BUTTER.

In 1981, Doug Cox put down roots in Montana where he opened his very successful saddlemaking shop. In 2000, he was looking for easier winters when he decided to relocate to Nevada. Today, Cox Custom Saddles is still located in Gardnerville, Nevada. It's where he maintains his workshop and studio with the help of his wife Deb.

I was so taken by his work that I called him to tell him so. We talked for a little bit and I found that he is a very nice man. Very pleasant and willing to talk about the history behind his work. Frankly, when talking to such people who thoroughly impress me, I'm sometimes amazed at how down to earth they are. That's the case with Doug Cox. There is nothing pretentious about him. He's a cowboy at heart.

Though an extremely talented saddlemaker and absolutely gifted leather carver, as I said before "a true artist," he is very humble about the fact that owes what he knows to others who have influenced his work. He makes no bones about having a debt of gratitude to many early masters. He feels blessed to have had the opportunity to work with those masters. They gave him the opportunity to develop his expertise and he has not forgotten that fact. Besides Bob Kelly and Ray Holes, he also thanks Bill Knight and Stanley Diaz, as well as all of the old Visalia and Hamley catalogs for inspiration in his development.

Of course having ridden horses for years, he understands the feel of a well made saddle. Knowing that, he also credits his inspiration and construction skills to several very competent horsemen such as A.D. Grandchamp, John Baeta, Sam Meads, and Jim Roser.

Doug Cox's cowboy background, his knowledge both in the saddle and at the workbench, his artistic talent, can all be seen in the gorgeous works he creates. And while he certainly builds saddles and gear for collectors, he also builds saddles, headstalls, breast collars, beautiful standing martingales, spur straps, and chaps for the working cowboy, stockman, and ranchers. From the competitor, to the trail rider, to the working cowboy, to the fine art collector, his beautiful flower carvings are deep distinctive and available to all.


His work is "Old School." And frankly, I really see him as part of a small group of saddlemakers whose artistry and attention to detail while putting out a great saddle will be missed when he retires. Thankfully, that's not yet.

While I don't usually plug someone's product on here, if you're someone looking for a one of a kind saddle made with the finest quality leather, an investment, a piece of work that's has no duplicate, then give him a call at (775) 783-8991 at Cox Custom Saddles in Gardnerville, Nevada.

Like me, I'm sure you will absolutely appreciate his work.