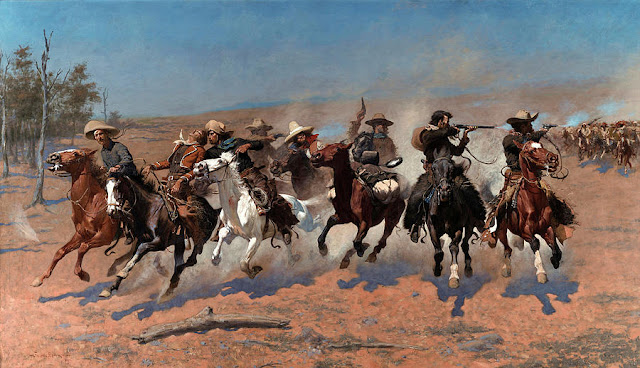 A reader has written wanting to know if the Cochise County Cowboys Gang was really the first and earliest form of organized crime in the United States? She also wanted to know "what's the difference between an outlaw gang and simply a group of outlaws who know each other but might not be in a gang together?"

Well, what's a criminal gang? As defined in Criminal Law Codes of most states, a "Criminal Gang" is a group or an association of three or more persons whose members meet the following elements:
(1) individually or collectively engage in a pattern of criminal gang activity;
(2) have as one of their primary objectives or activities the commission of one or more underlying crimes, including acts by juveniles that would be underlying crimes if committed by adults; and
(3) have in common an overt or covert organizational or command structure.

A few of the more famous was the Wild Bunch, the Dalton Gang, and the James-Younger Gang. Where most all of the outlaw gangs in the Old West were tight knit bands of thieves, robbers, and killers, the Cochise County Cowboys, also known as the "cow-boys" and the Clanton Gang, really doesn't appear to have been a tight knit band. As far as I can see, the Cochise County Cowboys Gang of southern Arizona during the early 1880s was sort of odd in that instead of being a band, they're considered a "loose association of criminal types."

While that might the opinion of some writers, I can't see how they can get away with saying that since that wasn't the case at all. In fact, there were a number of organized crime syndicates, aka criminal gangs, operating in America long before the  Civil War. In some cases 30 years or more before the establishment of Cochise County or the Clanton Gang.

It is just a fact that there were already organized crime syndicates in places such as New York City, Boston, San Francisco, and New Orleans, true organized crime syndicates, before the Civil War. Those criminal organizations ran from the Irish gangs and the Jewish gangs of New York City and Boston, to the Mafia which had already taken a foothold in many cities including New Orleans, to the Chinese Tongs who were well organized in San Francisco. Yes, long before the Cochise County Cowboys Gang was ever thought of.

While those organized crime syndicates did not ride horses, and not rob trains and stagecoaches like the small time counterpart Outlaw Gangs in the West, those true organized crime gangs stole huge amounts of money through racketeering, counterfeiting, extortion, conspiracy, robbery, and thefts. Beside that, murder was common for them.

As for out West, there were a lot of Outlaw gangs in what was then considered the undeveloped West. To name a few, there was Billy the Kid's Gang known as the Rustlers, working in Lincoln County, New Mexico, for a few year in the late 1870s. Long before Billy the Kid was ever heard of, the Daly Gang was said to have absolutely terrorized the silver town of Aurora, Nevada for the two years between 1862 and 1864. Before them, the Sidney Ducks ran wild in San Francisco in the early 1850s

The Black Hills Bandits worked at robbing stagecoaches in the Deadwood, South Dakota, area for a year or so in the 1870s. Outlaw Sam Bass was a part of them before he fled the scene and started his own gang in Texas. The Sam Bass Gang robbed trains and banks in Texas mostly from 1877 to 1878. Yes, just a little over a year as well.

It's really not much time at all when you consider that the Archer Gang applied their criminal trade in Indiana, Illinois, and Kentucky, for at least 10 years before being taken down. Consisting of Archer brothers, Tom, Mort, John, and Sam, they actually had about 20 members in their gang. Interestingly enough, it's said the Archer Gang members were all blood kin in one way or another.

The Archer Gang robbed trains, and were highwaymen robbing stagecoaches and lone travelers. But frankly, those ruthless individuals didn't stop with thieving. They were also known for rustling cattle, stealing horses, committing arson for pay, extortion, counterfeiting, burglary, and even murder for hire. Yes indeed, murder for hire.

During their decade long rein of terror, this little known gang of Outlaws were responsible for strangers, peddlers, and even regular citizens going missing. And frankly, it's amazing to think that most all of their victims were never seen again. In most cases, no trace of their bodies were ever found.

It is said that in-fighting was what ended their gang. No, not a hail of bullets in some gigantic shootout. Fact is, their downfall is said to have came about when Sam Archer's wife informed the law of what her brothers-in-law were doing. With that, Tom, Mort, and John Archer were arrested for murdering a well-known local man who went missing.

The three were jailed at the town of Shoals, Indiana. But before ever making it to trial, a group of citizens formed. Those vigilantes took them from the courthouse and lynched all three from trees. Sam Archer didn't escape the rope as his wife had hoped. He was later arrested, tried, and legally hanged four months after the lynchings of his brother. Since there were no Archer brothers left, the Archer Gang was finished for good.

All proves out that old saying, "You live like an outlaw, you die like an outlaw." And while most are shot to death, a large number ended up dangling from some tree after citizens have had enough.