Reparations Have Already Been Paid 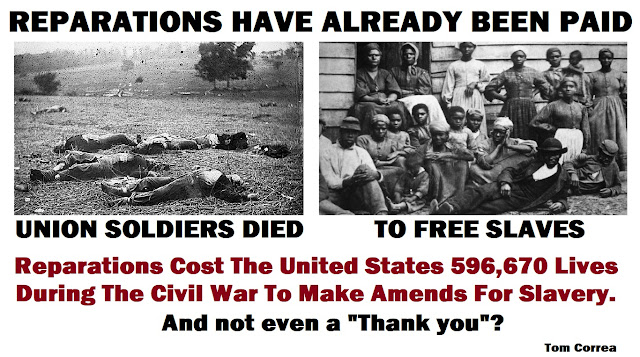 I made the meme above to be posted on Facebook. I've had a lot of friends ask me about it so I will tell you what its all about. It's simple really, I did it to remind people of the price that was paid to free Black slaves during the American Civil War. Since this Memorial Day is approaching, it is only appropriate to talk about why some Americans have died for our country. To end slavery during the Civil War is one of those reasons.

Americans died fighting for our Independence from 1776 to 1783, and after by way of the diseases contracted during that time. During the War of 1812, Americans died as a result of poor administration policies pertaining to keeping a standing Army. President Jefferson was against that and the British saw his policy as a weakness to be exploited. Thus, the Brits invaded and burned down Washington D.C.. Thankfully, we were able to regroup and win that "Second War for Independence."

As for the Mexican-American War, that was for liberty. Freedom for those living under a tyrannical Mexican regime. The Civil War was fought as a result of a number of things including over-regulation by the Federal government and crippling taxation, and of course slavery. My belief is that it was not a single issue war. It is naive to think so.

For those who think it was strictly about slavery, they are fooling themselves. Slavery in the South, though slavery did exist and was being propped up by the extremely wealthy who wanted to hold on to cheap labor, was not shared by all. The vast majority of Southerners didn't own slaves.

And by the way, please don't bother writing to say that slaves were "free labor" and not simply "cheap labor." Slavery was "cheap" in that, whether we want to admit it or not, slaves were treated like livestock and that means they had to be fed and cared for like cattle. Doing so was not cheap. Because of that, the subsequent cost of slavery, the logistics of having slaves, involved housing, feeding, and caring for them. It is sad to say that some slaves were kept at all, but even more so when we think that they were in many cases kept in worse conditions than some expensive race horses.

And also, after the Civil War, there were many farms and plantations that actually hired former slaves. It's said that those farmers treated their "new hires" like slaves, including floggings, beatings, killings, but the former slave owner actually saved money by refusing to feed and house them as they did previously when they were owned.

While there were anti-slavery organizations in the America's British Colonies before the founding of the United States, we forget that the import of slaves from Africa into the United States was made illegal and actually stopped by President Jefferson in 1808. That was 25 years after we became an independent nation. Slavery was still legal until 1865, but from 1808 to 1865 it was illegal to import Black slaves into the United States.

As for slavery itself, slavery existed in the United States from 1783, which was when we actually won our independence and became a new nation, to 1865 when slavery was abolished by President Lincoln. That was an 82 year period. No, not the 400 year number which we hear from political activists attempting to use to make our nation's history of slavery longer than it was.

So what are "reparations"? The term "reparations" is defined as "the compensation, the making of amends for a wrong one has done, by paying money to or otherwise helping those who have been wronged."

I'm not going into every battle that was fought. I'm not going to go into listing the name of every soldier or sailor who died knowing that they died while doing their part to free black slaves in the South. I'm not going to list the 596,670 Union troops that were killed, wounded, captured, or missing. No, but that is the compensation, what was used to make amends, the lives changed or ended as part of the reparations made to Black slaves.

Before someone writes to tell me that freed slave reparations was forty acres and a mule as part of Special Field Orders No. 15 approved by President Abraham Lincoln. Please understand that while freed slaves expected to legally claim their 40 acres of land and a mule after the end of the war, not too long after it was approved, it was superseded by the Freedmen's Bureau Act. That act reversed Lincoln's order. That was done by President Andrew Johnson who became president after President Lincoln was assassinated.

Besides, I content that the lives, dead and wounded, of over a half-million Union troops truly trumps 40 acres and a mule. In fact, because of the Civil War, I content that reparations for that 82 year period of American history when slavery existed in the United States has already been paid. The cost to the United States was huge. The reparations were paid in blood during the Civil War. It cost the United States the lives of 596,670 Union troops. Yes, those who died, were wounded, captured, or ended up being missing in combat to set slaves free.

Below shows what non-Slave States the dead Union troops came from. It also shows the number of black Union troops (Colored Troops) died as part of the price paid, all of the rest were White:

During his 2nd Inaugural Address, President Abraham Lincoln put it this way:

"Fondly do we hope, fervently do we pray, that this mighty scourge of war may speedily pass away. Yet, if God wills that it continue until all the wealth piled by the bondsman’s two hundred and fifty years of unrequited toil shall be sunk, and until every drop of blood drawn with the lash shall be paid by another drawn with the sword.”

The blood that was drawn by the sword during those horribly bloody years of the Civil War was the price Americans paid to set the slaves free, to pay for those years when black slaves were under the lash. The Union casualties, more than a half a million of them, was the price of reparations for what was done previously to that war. Those reparations made Union wives widows and orphaned children, and lift limbs piled. That was the price to our nation for condoning slavery. It was our nation's price to make amends for all of those who were kept in bondage by both white and black slave master.

And frankly, so that those Union soldiers didn't die in vain, or had their arms and legs blown off for nothing, it's OK to say "Thank you."