The Hanging of José Forner

The first legal execution held in San Francisco took place on December 10, 1852. The man hanged was Jose Forner. Thousands of people gathered around the scaffold on Russian Hill. His confession, and a sketch of the life of the murder, was published as a letter-sheet shortly after the execution.

Confession of José Forner y Brugada.
On the day that the killing was done, to wit: On the evening of the 8th of October, about the hour of 4 o’clock, in company with two young friends, talking of going to dine, they did not wish to go so early. I said, well, I would take a walk and see the Steam Paddy work. I then parted from my friends and walked towards Happy Valley; and while I was looking at the machine at work, one José Rodriguez (the deceased) came up to me and slapping me familiarly on the shoulder, said, “Hallo, José, what are you doing here?”
I returned for answer, that I had come out for a walk, I at the same time noticed that the deceased looked strangely at me. After a few moments he asked me to come and take a drink with him, I said no, thank you, that I must away and obey a call of nature, I then left him and went on a sand hill, took off my body my money belt, which contained some four hundred dollars, I laid the belt on the ground: at the same time I took off my knife, that also I laid on the ground; whilst I was in the act of dressing myself, deceased came running up to me, and saw my knife laying on the ground, which he instantly seized, and said, “I want your money,” I said that I had but two or three dollars, which you can have if you wish it.
He answered, “No, you have more and I will have it,” at that moment he jumped towards me, I stepped back to avoid him, when he struck me a blow with the knife, which took effect in the calf of my leg, I exclaimed that he was a d—d scoundrel, what did he mean.
He ran down the hill, I after him, he dropped the knife, I picked it up while running after him, he made an effort to get the knife away from me, which I had done afterwards, God only knows, I was frantic with rage. I confess that I did intend to kill him, believing at the time, that it was his intention to rob me and perhaps to kill me if necessary in its accomplishment.
The money which I had when arrested, was my own, I had worked hard for a portion of it, the other portion won at cards. I was cook and confectioner at the Jackson House where I received $125. I also worked at the Nueva Mondo and at the Laguna: from these two pleaces I received between $50 and 60, the balance of the money I won at cards at the El Dorado, Polka and Arcade: in all about $400

I was born in Valencia, (Spain) in the month of May, 1820, of highly respectable parents. My uncle is Alcalde of Valencia, and all of my family, with but few exceptions, hold office under the Spanish government. I am worth in Valencia from $4000 to $5000 in real estate.
At the age of 16 years I went to learn the trade of confectioner with my uncle; served with him 5 years; from there I went to Barcelona, was three years in the service of Don Jina Costa; from thence I went with letters of introduction to the brother of my last employer Don Juan Costa, at Havana, Cuba, worked there two years; then went to my native place Valencia; from there to Madrid; from thence to Barcelona; then again to Havana, was there three or four months in the house of Dominicas; from thence to Vera Cruz, Medico; thence to Puebla; thence to the city of Mexico; thence to Acapulco, from there to the city of San Francisco, where I have been working five or six months.
I had about $75 when I arrived here. I worked for the proprietors of the Jackson House, the hotel Nueva Mondo and the Laguna. This is the first time that I ever was in prison, and never wronged any man of one dime. The money found on me was my own.
Signed,
José Forner y Brugada 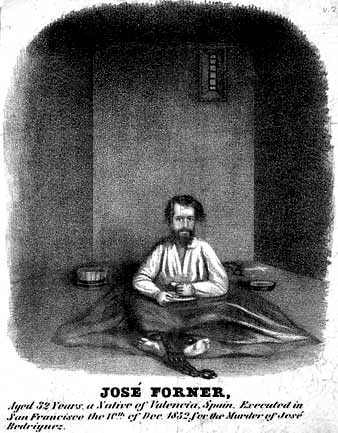 Sketch of the life of José Forner
Published under the direction of the keepers of the County Jail and for sale by Bonestell & Williston, Clay St. San Francisco.
Source: San Francisco Museum