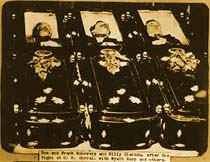 On this tenth day of November, 1881, on the hearing of the above entitled cause, on the examination of Wyatt Earp and J. H. Holliday; Thomas Keefe, a witness of lawful age, being produced and sworn, deposes and says as follows:

Thomas Keefe, carpenter. To interrogation, says he saw a difficulty between Wyatt Earp and Thomas McLaury on October 26, 1881, to wit:
"Around the corner of Fourth Street, about 50 feet from Allen Street, between there and Judge Wallace's court, I do not remember the exact time of day-it was about 12 o'clock I think-the man that Wyatt Earp had trouble with was walking towards Allen Street on Fourth Street. Mr. Earp was going from Allen Street towards Wallace's Court when they met. I did not understand what they said, and the fight commenced. I saw Mr. Earp knock McLaury down with his pistol, twice-I saw him fall twice-McLaury threw up his arms to knock the blows of the pistol off. Mr. Earp then put his pistol up and walked away from him. I couldn't say there were over two blows struck with the pistol. I could not swear to any more.
McLaury then got up and staggered and walked toward the sidewalk and picked up a silver band or roll, to put on his hat again, that was knocked off. That was the last I saw of him, McLaury, for half an hour. He walked away. I saw no other blows struck, excepting those that were struck with the pistol. I did not hear any words pass between the parties. I was about 22 or 23 feet from them. There were other parties nearer to the difficulty than I was."

To further questioning, says he was at the scene of the killing, "after the killing was done." The shooting was over. He was at Fourth and Allen when the first shot was heard by him, "and I ran down Allen Street to Third Street, from Third to the corner of Fremont."
My attention was called then to a man lying on the corner of Third and Allen Streets. It was Tom McLaury. He was dying. I called two or three men and said, "Let's pick this man up and take him in the house before he dies."
We brought him in the house and got a pillow and laid him on the carpet and made him as easy as I could. I asked him if he had anything to say before he died and he made no answer. He could not speak. Then I unbuttoned his clothes and pulled his boots off and gave him some water, and the other man was halloing so with pain I sent for a doctor to inject morphine in him. I believe his name was Billy Clanton. The doctor arrived there then, and I helped the doctor inject morphine in him, alongside the wound. He was turning and twisting, and kicking in every manner, with the pain.
He said, "They have murdered me! I have been murdered! Chase the crowd a­way from the door and give me air!" The last words he said before he died were, "Drive the crowd away!" I stayed there until the Coroner came; about eight or ten minutes afterwards.

Does not know who helped him carry Tom McLaury into the house-"Everything was all excitement." Says there were four or five men there. Did not see any arms on Tom. Again tells of unbuttoning Tom's clothing, "and as soon as Doctor Matthews came, we searched the body and did not find any arms on him. We examined him close enough to see if there were any arms on him, and there were none on him; we only found money on him.”

Tells of running to where Tom was lying, in the street, and says that three or four other men came up about the same time. He raised up Tom's head. Again declares that there were no ammunition or arms on Tom at that time, nor on the ground near or about him, nor on his person, nor was there any belt on him. Says when they took Tom into the house, Billy Clanton was there, and Mr. Noble and Mr. Campbell, the Clerk of the Board of Supervisors, and another man who stops at Vogan's, "I don't know his name."

Says he has lived here about one year. Came from Bodie, California, where he lived two years and a half, before that lived in Oakland, California, eight months; before that about one year in San Francisco. Worked as a carpenter and builder in Bodie. Has been busy at this trade, "pretty near all the time," in Tombstone. Did not know Billy Clanton nor the McLaury brothers, but knew Ike Clanton about two weeks be­fore the shooting. Had no business relations with Ike Clanton, and denies receiving either promise or money from Ike Clanton or anyone else connected with the prosecution. Says he knows William Allen for two or three months." Says Billy Clanton was in the house when they brought Tom in. Tells of sending for doctor and of Dr. Miller coming. Says he told the doctor to inject morphine into the wound near the stomach says Billy was "halloing" for morphine [because of pain]. Says he held Billy on his back while the doctor injected; that it was before the injection that Billy said he had been murdered; that he died, "about 10 or 15 minutes" after the injection of "two syringe fulls; morphine syringes; about the thickness of a small sized lead pencil about two inches long."

In response to question as to shot in wrist: "It went from the inside to the outside." Course of ball was diagonal across the wrist [here witness illustrates upon the arm of Mr. Fitch, the direction in which the ball passed through the arm of Billy Clanton, by showing that the ball entered the wrist nearly in line with the base of the thumb and emerged on the back of the wrist diagonally.] Says the orifice on the outside of the wrist was the largest. Did not see any powder bum on Billy Clanton's body or clothing.

(A) Bauer, the butcher, denies having conversed with anyone outside counsel for the prosecution prior to giving testimony. Is asked if he sought Mr. McLaury or not. Says this man sought him for three days. Then his various positions prior to and during the shooting are restated.

Says his relations with Isaac Clanton were not intimate, but that he conversed with him on the day of the shooting at Hafford's Comer, about 20 minutes or half an hour before the shooting.

(Q) Was anyone with Tom McLaury when he was hit by Wyatt Earp?

(Q) Did you ever reside in the state of Nevada?

(Q) Were you at any time during your residence in Nevada, defendant in any action wherein the State of Nevada was plaintiff in any criminal action?

(Q) How long after Tom McLaury was carried into the house was it before he died?

(A) Six or seven minutes.

To query, says there was no weapon on William Clanton, but there was a cartridge belt on him, and a pistol was lying near the door-a Smith & Wesson, large-sized-about two feet from the door-on the carpet. Says he picked [the] pistol up, examined it and thought there were two empty chambers. "Then Wes Fuller examined it and said there were three empty, and I looked again and saw that three chambers were empty." Doesn't know whose pistol it was. Dr. Matthews took it. Says Frank McLaury was not brought into this room. He remained there until Tom's and Billy's bodies were taken away in a wagon.

(Q) Were you not, during your residence in Bodie, during the times you have already testified to, a portion of that time, confined in jail there? [Objection]

(A) I was arrested and put in jail and honorably acquitted. I was in jail for entering my own house after coming back from Idaho and dispossessing a certain gentleman who was living there.

(Q) Go on and state all about the matter about which you have testified to in your last answer upon cross-examination.

(A) I went to the Yankee Fork Country, Idaho, the first of March, two years ago. I left Bodie. Was gone eight months and came back and heard some very bad talk in regard to my family arrangements-and a man named Don McShannon. I approached him upon the subject and he denied all charges in regard to being intimate with my woman. I requested him to leave the house and rapped at the door and was shot at through the door and I was arrested and put in jail. I was then tried and acquitted honorably [All the foregoing is crossed out, beginning with, "I was in jail." but there is no notice of motion to strike.]

(Q) You stated in your cross-examination that the pistol you saw lying on the floor by the door was a Smith & Wesson-are you sure of that?

(A) There was a long slot in the sight, and I know that Smith & Wesson pistols have that slot. . . . It was an old pistol, well-worn. There is more discussion and then, at request, he picks up from the table what he believes to be the pistol in question. Ordered to examine same, learns that it is a Colt.4 In examining gun, witness relates much of what has been said about shells fired from it, etc. Declares to court he does not think this is the pistol he examined in the house. [Witness now examines cartridge under the hammer being gone.] "I did not revolve the cylinder when I first examined it."

(Q) Now take the other pistol in your hand, brought in by the Coroner, and state. . . . if that is the pistol that you examined and you found lying upon the floor.

(Q) What kind of pistol is the other one?

(Q) Have you seen the pistol you first examined from the time you last saw it on the day of the shooting until just now in this courtroom?

(Q) Do I understand that after completing your cross-examination this noon, during the recess and before resuming the examination this afternoon, you went to Dr. Matthews' office and examined the pistol concerning which you have since testified on re-direct examination?

(Q) What, if anything, was said to you while there, with respect to this pistol?

(A) Judge Campbell and Mr. Ben Goodrich were there, and wanted [me] to show which way the pistol laid on the floor when I first saw it, [and] which way Tom McLaury and which way Billy Clanton laid.

(Q) As to what about the pistols?

(A) I was requested to look at the two pistols and say which I thought was the one [found] on the floor of the little house on the day of the shooting.