About Darby, Music, Movies, And More 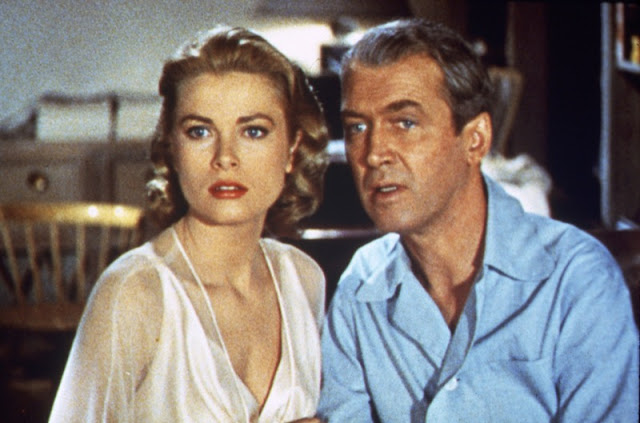 During dinner while celebrating my mother-in-law's birthday a few days ago, my family met a wonderful young woman by the name of Darby. As usual, my curiosity got to me and I asked what motivated her folks to name her Darby. Frankly, whether it's parents naming their children after favorite vacation spots, hotels, movies stars, or made-up ethnic names, I'm always surprised at the way parents name their kids.

I thought it may have been a family name passed down, but that wasn't the case. She said her parents liked the name Darby from a Disney movie. We had a laugh about that. But really, it fits her. Her pleasant disposition and genuine friendliness somehow goes along with her name. And of course, after asking her about that Disney movie, we somehow stumbled over the fact that she loves classic movies and older music. She said her favorite movie stars are Grace Kelly and Ingrid Bergman. I immediately suggested that she watch Rear Window and Casablanca. She said she owns both on DVD.

My conversation with her started me thinking about some of the questions that I get from readers. Many want to know where I received my degrees from, what are they in, what sort of work was I in before retiring, was I an investigator, did I retired from the Marine Corps, or if I've ever considered running for political office. Some have written to ask about how long I've been writing before starting this blog, if I did it for a living, and was there any real money in writing for others.

I'm real surprised at how many readers have contacted me to ask the exact number of firearms, and types of guns, that I own. That's always sort of surprised me, as if I'd tell folks such a thing. Or really, if that's anyone's business but mine. And while that surprised me at first, I got used to being asked strange questions like that. For example, I've had a couple of people write to ask what sorts of precautions have I taken when "the next revolution starts." Imagine that!

As for my education, what I've done for work, my time in the Corps, the absurdity of running for office, or some of the firearms that I own, I've pretty much answered a lot of those questions here and there since starting my blog in 2010.

Though not as much as I have in the past, I still write about horses, firearms, and conservative politics. Of course, as most on here know, or at least those who have read my blog for a while now, I've concentrated on writing about my interest in Old West History more than anything else. And since I've always found American History so interesting, especially what took place during the Old West and the Great Depression, I have sort of focused on that lately.

Darby did get me thinking about the readers who have taken the time to ask about what sorts of movies and music that I may like. Maybe it's because I'm a very old fashion sort of guy, but my taste in music and movies runs to the old stuff. In fact, from old Western television series like Lawman starring John Russell and Peter Brown to the music of Bob Wills and Glenn Miller, I love of the old stuff.

Since I grew up in the 1950's and 60's, I still enjoy listening to Dean Martin. Yes, especially his singing My Rifle, My Pony and Me. Whether it's Eddy Arnold doing Cattle Call, Johnny Horton singing North to Alaska, Ray Price singing Soft Rain, Merle Haggard singing San Antonio Rose or The Fightin' Side of Me, Ricky Nelson doing Mary Lou or Travelin' Man, or the great Marty Robbins singing El Paso, I like songs and singers who I can understand what they're saying. Because of that, besides Dean Martin, I love Elvis, Nat King Cole, Jim Reeves, Perry Como, Frankie Laine, Rex Allen, Marty Robbins, Merle Haggard, Tom T. Hall, and Ray Price. I love listening to Doris Day. Laugh if you want, but there are few sounds that top Doris Day singing Sentimental Journey.


I'm sure someone will write to ask about my taste in "modern" music. Well, I've never been a Garth Brooks fan. Frankly, after seeing him in concert many years ago, I really think he's about the most over-rated singer out there. For me, I'm a big fan of George Strait, Alan Jackson, Emmylou Harris, Suzy Bogguss, Kathy Mattea, Asleep At The Wheel, and the Sons of the San Joaquin.

Kathy Mattea did a song called Where've You Been? in 1989. Like Tom T Hall's Old Dogs, Children, and Watermelon Wine, and Kenny Rogers' The Gambler, I find that I'm really thinking more about their messages as I've gotten older.

As for those songs that stick in you head, I remember being at the Marine Corps Recruit Deport going through Boot Camp in 1973 when I heard Marie Osmond's Paper Roses coming from a jukebox inside the Enlistedmen's Club on base. I remember standing in a chow-line and just about the whole platoon leaned to hear it better. I remember working the door at a honky-tonk bar in 1979 when I first heard Waylon Jennings singing Amanda. And I happened to be working the door in that same joint in 1981, when the song You're The Reason God Made Oklahoma by David Frizzell and Shelly West came out.

Because I like singers with great voices who I can maybe sing along with if I have a mind to, I also enjoy most '50's rock and roll, Jimmy Dean's Big Bad John, and Johnny Cash's Ring of Fire. And really, how can anyone not like Don Gibson's Sea of Heartbreak, Ben E. King performing Stand By Me, Sam Cooke's Wonderful World, Louis Armstrong's What A Wonderful World, or Gene Pitney's The Man Who Shot Liberty Valance.

Since I mentioned the song The Man Who Shot Liberty Valance, the 1962 movie of the same name starring John Wayne, Jimmy Stewart, and Lee Marvin is about as good as any classic Western can get. OK, maybe with the exception of Shane (1953) starring Alan Ladd -- which is probably the best Western ever made.

Besides Shane and The Man Who Shot Liberty Valance, my favorite westerns are Last Train from Gun Hill (1959) starring Kirk Douglas and Anthony Quinn, Big Jake (1971) and Cahill U.S. Marshal (1973) which featured John Wayne, Rough Night in Jericho (1967) with Dean Martin, George Peppard, and Jean Simmons, Hang 'Em High (1968) which starred Clint Eastwood, and Bite the Bullet (1975) starring Gene Hackman and James Coburn. Those are a few of my very favorites.

My taste in westerns may surprise some folks. In fact, some people have probably never heard of some of the other westerns that I like. For example, there's West of the Pecos (1945) starring Robert Mitchum and Barbara Hale, Blood on the Moon (1948) starring Robert Mitchum and Robert Preston, Cattle Drive (1951) with Joel McCrea, Man with the Gun (1955) with Robert Mitchum as a "town tamer," The Proud Ones (1956) with Robert Ryan, The Oklahoman (1957) starring Joel McCrea and Barbara Hale, Gold of the Seven Saints (1961) with Clint Walker and Roger Moore, The Night of the Grizzly (1966) starring Clint Walker. Of course, let's not forget the Hopalong Cassidy films starring William Boyd, or any of the Tim Holt westerns like Under the Tonto Rim (1947).

I can see the email now, "How about Django Unchained, and other great new Westerns? What are you, a racist?" Well, I really don't think Hollywood makes too many good movies anymore. With all of the films that they put out, most are really bad. By the previews that I saw, Django Unchained looked like a horrible film and I wasn't going to waste my time watching it.

I have friends who support any and all westerns being made. It doesn't matter to them if they are pathetic remakes like the sad job they did remaking 3:10 to Yuma. I watched a few minutes of the remake and it was terrible. As for political pieces like Dances with Wolves (1990) starring Kevin Costner which demonized Americans while making the Old West look nothing like it was, I hated it.

Most Hollywood films a not historically correct. But that shouldn't matter if they are entertaining and not boring. For me, I believe that westerns don't have to be historically correct. But they should be entertaining. Sadly, Kevin Costner's Dances with Wolves, just like his film Wyatt Earp, are lousy films because they were not historically correct or in any way entertaining. In Wyatt Earp, Costner makes the movie about Kevin Costner and is actually pretty boring. As for Dances with Wolves, it sets out to make a political point which is to make "whites" appear evil, all while attempting to rewrite history. I remember thinking how this film wasn't worth my time.

After posting this, a friend wrote to say the only thing good about Dances with Wolves is the movie's soundtrack. I agree a hundred percent with that. The soundtrack to that movie is excellent. Another friend wrote to tell me that I forgot to mention Lonesome Dove. I didn't mention Lonesome Dove because I was listing movies. While I think Lonesome Dove, as great as it is, would've made a great feature film, fact is it's a mini-series. And frankly, it needed to be a mini-series to get everything in. For the record, I am a big fan of just about anything Robert Duvall's done, including Open Range and Secondhand Lions.


During this time of year, I've always loved It's a Wonderful Life (1946) starring Jimmy Stewart and Donna Reed, and of course there's the original Miracle on 34th Street (1947) film starring Maureen O'Hara, John Payne, and a very young Natalie Wood. But my favorite Christmas movie is The Bells of St. Mary's (1945) starring Ingrid Bergman and Bing Crosby. Although, after saying that, I have to admit that around this time of year I've always enjoyed a fairly unknown movie We're No Angels (1955) starring Humphrey Bogart, Peter Ustinov, and Aldo Ray. It's a great Christmas comedy that does a great job of poking fun at Humphrey Bogart's tough guy on screen persona.

My short conversation with Darby was good for a few reasons. But mostly, it's because she really got me thinking about how there may be more people than I suspect who don't like what Hollywood and the music industry is doing today. She was a pleasant surprise. It was great to hear her talk about how she loved classic films and didn't like today's music. Frankly, I don't hear that very often at all.

And since she likes classic movies, I'm hoping that those that I mention above leads her to enjoying more of what came out of that era. As for being so very polite, respectful, friendly, Darby has more class and bearing than most young people that I meet today. That in itself speaks volumes about her good character, it also speaks to the fact that her parents did a great job of raising her.

I can only hope Darby has a very Merry Christmas.