One of the Greatest Surprises at Christmas 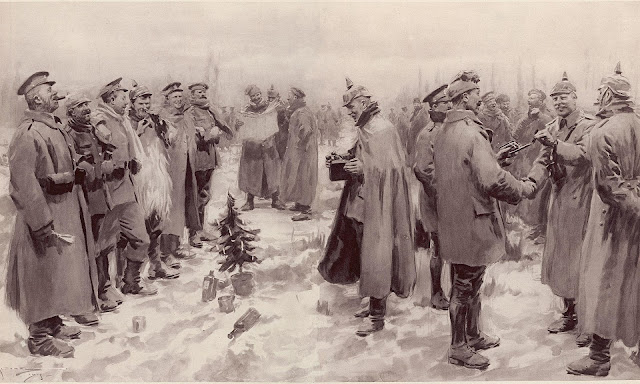 On December 24th, 1818, the Christmas carol "Silent Night," which was composed by Franz Xaver Gruber, was sung for the very first time at St. Nicholas Church in Oberndorf, a village in the Austrian Empire on the Salzach river in present-day Austria.

The story goes that a young priest, Father Joseph Mohr, had come to Oberndorf the previous year. He wrote the lyrics of the song "Stille Nacht" ("Silent Night") in 1816. It is unknown what inspired Mohr to write the lyrics.

Franz Xaver Gruber was a schoolmaster and organist in the nearby village of Arnsdorf. Before Christmas Eve, Mohr brought the words to Gruber and asked him to compose a melody and guitar accompaniment for the Christmas Eve mass. The reason for the guitar is that a river flooded and damaged their church organ. The collaboration took place, and the rest is history.

Over the years, because the original manuscript had been lost, Father Mohr's name was lost to time. And while Gruber was known to be the composer, many people assumed that some great composer such as Mozart, or Beethoven came up with the melody. That all changed in 1995 when a manuscript was discovered in Father Mohr's own handwriting. It was dated and states that Mohr wrote the words in 1816 when he was assigned to a pilgrim church in Mariapfarr, Austria. That manuscript also shows that the music was composed by Franz Xaver Gruber in 1818. The manuscript is believed to be the only such work in Father Mohr's own handwriting.

By 1859, an Episcopalian priest John Freeman Young who was serving at the Trinity Church, New York City, wrote and published the English translation to the famous song. That translation is what we still sing today.

The truce began on Christmas Eve, December 24th, 1914, when German troops began decorating their trenches for Christmas. Soon, they were noticed placing candles on a tree, then another and another. Then they were heard singing Christmas carols. Most notably, the German troops started singing "Stille Nacht" ("Silent Night"). Imagine being nearly knee-deep in mud in northern France and sing Silent Night.

Well, soon the British troops in trenches across from them, across "No Man's Land," started singing the English version of "Silent Night." After that, troops started shouting Christmas greetings to each other. Then calls came out for troops to cross "No Man's Land" and meet.

That was a dangerous place. As dangerous a place as could have been found in the history of warfare. Snipers regularly tried to take out targets of opportunity. So imagine if you would the bravery it took for the first troops to climb up out of the trenches and make the effort to greet their enemy at Christmas. Such bravery resulted in the men exchanging small gifts such as buttons and coins, food and even clothing.

Soon, the unofficial truce expanded and it allowed the troops to retrieve those recently killed. The dead were returned to back behind their lines by burial parties. And believe it or not, last respects and funerals took place as soldiers from both sides mourned those killed. They did do together. During one such funeral in the middle of "No Man's Land," both German and British troops gathered, read a passage from Psalm 23, and paid respects to those of equal courage.

I read where they had a soccer game or two, but I couldn't find out what they used for a soccer ball since soccer balls weren't in the trenches in World War I. And while the story of the soccer games are widely known, I can't find out how it was done. Because of that, it makes me wonder if it might be more myth than fact.

As I stated before, the truce was not sanctioned by the higher ups. It actually worried the high-ranking officials on both sides. Some were afraid that their men might lose their will to fight. It is said that a German corporal saw the truce as a surrender of sorts. He is known to have said, "Such a thing should not happen in wartime. Have you no German sense of honor left?" That German corporal was Adolf Hitler.


It is said that when the sun set on Christmas Day, that all of the troops returned to their respective trenches. While a few unofficial truces actually lasted until New Year’s Day, in most places on the front the war resumed on December 26th. One report on the resumption stated:


At 8:30 a.m. in Houplines, Captain Charles Stockwell of the 2nd Royal Welch Fusiliers fired three shots into the air and raised a flag that read “Merry Christmas.” His German counterpart raised a flag that read “Thank you.” The two men then mounted the parapets, saluted each other and returned to their sodden trenches. Stockwell wrote that his counterpart then “fired two shots in the air—and the war was on again.”

The events of what took place was not reported in newspapers at first. In fact, it was a week later before the public heard about it. The first to report it was The New York Times which published the story on December 31st. Remember, the United States was still neutral at the time. British papers picked it up and immediately printed a number of versions of what took place, many were first-hand accounts from soldiers in the field. Some accounts were from letters sent home to their families.

During the Christmas of 1915, there was no truce -- official or otherwise. In fact, it's said that British Expeditionary Force commander John French issued orders stating that such an unofficial ceasefire should never happen again. As for their resumption of fighting? It would become even more brutal than before, especially with the introduction of mustard gas in 1915. They say that's why the event was not repeated in 1915.

And while the guns of World War I did not finally fall silent again until the signing of the armistice on November 11th, 1918, "The Christmas Truce," as it became known, did in fact provide proof that such a thing was possible. Seen as a sort of Christmas miracle in itself, the guns being extinguished for that brief moment in time gave many a flicker of hope that peace was something that wasn't completely out of reach. Too bad the moment wasn't seized upon, as millions of lives could have been saved.