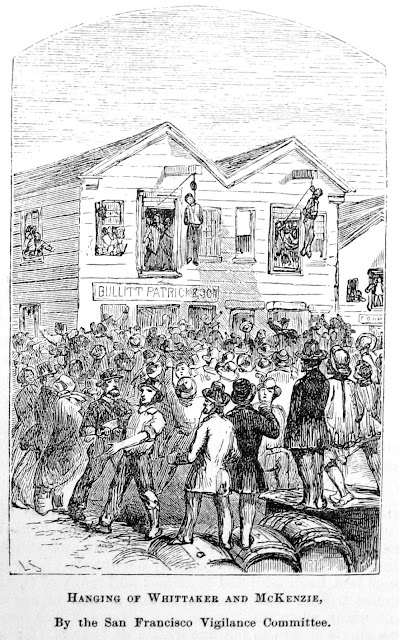 The article below appeared in The Steamer Alta California on September 1st, 1851:

Never Before Was San Francisco So Excited

Through every street, in all directions, the hurrying crowd of humanity rushed with the utmost precipitation — no one knew whither, no one knew for what. The bell of the Vigilance Committee had sounded its alarum note — and instantly the streets were living, swaying masses of human beings — uncertainty and conflicting fears and hopes ruled the hour … with a sweep like the rushing of a torrent of lava they bend their course towards the Rooms of the Vigilance Committee.

Almost instantly California street, Battery street, and all their approaches, are filled with one dense mass of human beings. From lip to lip the news flies that the two criminals, Mackenzie and Whittaker, have been taken by force from the jail, by an armed posse of the Vigilance Committee. On the eager and excited multitude press toward the Rooms.

On, on, on — the crowd becomes denser and broader. Wonder is stamped on every face — a solemn, almost awful silence pervades the thousands who are anxiously gazing up at the building, when quickly the doors are opened — a moment of preparation — and the numberless multitude holds its breath as the two malefactors are seen suspended by the neck — a struggle or two, a spasmodic heaving of the chest — and each spectator feels a thrill of terror coursing his veins as he involuntarily utters — dead, dead, dead!

Yes, they were dead! The two men — Whittaker and Mackenzie — who were taken from the hands of the Vigilance Committee a few nights since, by virtue of a write of habeas corpus, had been torn from the jail by force, in the middle of the day, and at the risk of life, hurried to the Committee rooms, and executed without scarcely a moment’s preparation. It is a most terrible tragedy! Well, indeed, might one exclaim, “I have supped full with horrors!”

Such are the terrible effects of misrule — these are the fruits of maladministered laws — these the results of official corruption, neglect and malfeasance. Well may the patriotic and the good turn in sadness and grief from the contemplation of such horrors.

The timid may shrink from beholding them — the quiet desire an end to them; but neither fear, regret, nor desire will accomplish our security. It must go abroad over the land that this community possesses the power and the will to protect itself against every species of wrong, and that it is resolved to do it at all hazards.

Whilst we regret that the Vigilance Committee have by this act, been brought into direct collision with the constituted authorities, we cannot but approve their course in executing the two criminals. This condition of affairs was not sought by the committee; it was rather forced upon them by the action of the authorities.

True, the authorities acted rightly in rescuing the men; but the course they took has proved to be unnecessary and injudicious. No one doubts the guilt of the men executed, and no one believes but that they deserved the punishment they received.

The Vigilance Committee felt this, and believing that the public welfare would be promoted by the act, they had resolved to execute Whittaker and Mackenzie. But the officers of the law, with unusual adroitness, prevented the decision from being carried into effect.

And what is to result? We see nothing disheartening or dispiriting in the prospect. On the contrary, we think we perceive that settled determination on the part of the body politic to have justice done, which is to be the great lever of our salvation.

When crime is convinced, as it must now be, that nothing is capable of preserving it from speedy and avenging punishment — when the abandoned feel, as they will now feel, that there is no safety for them here — when all bad men shall understand, as they may now understand, that their unworthy acts will surely be visited with condign reward — then will the country rise above its tribulations and its sorrows.

But this is a dreadful storm! If we did not know the ship, the crew and the passengers, we might despair of our reaching port. As it is, we speak confidently. We feel that there is gloom around us, but there is nothing to alarm the honest and patriotic.

The guilty may, and ought to, flee before the gale of popular indignation; but it is through such trials that our voyage is ultimately to become a prosperous and fortunate one. Through the watches of the night of darkness which now surrounds us, there is a gentle voice whispering "Be firm, be calm, be just, and the welcome daylight will soon come!"

-- end of 1851 article from The Steamer Alta California.

As for The Steamer Alta California news article above, I reproduced the article here just as it appeared in the newspaper at the time. So all misspellings, dashes, and use of an ellipsis here and there are as it was published back in the day. As for an ellipsis, that's a series of dots that usually indicates an intentional omission of a word, sentence, or whole section from a text without altering its original meaning. Ellipses in printed material usually appears as three dots (...). People use it because they are leaving out a word or words that are seen as superfluous or able to be understood from contextual clues when writing. I try not to do that.

It should he noted that the San Francisco Committee of Vigilance of 1851 organized because of the lawlessness taking place in San Francisco at the time. To legitimize their formation, they published a constitution on June 9th, 1851, which was in effect a mission statement. It advised all that they were there "to do and perform every lawful act for the maintenance of law and order." And, that they "determined that no thief, burglar, incendiary or assassin shall escape punishment, either by the quibbles of the law, the insecurity of prisons, the carelessness or corruption of the police, or a laxity of those who pretend to administer justice."

Two days later, the Committee of Vigilance apprehended and hanged a former-Australian convict by the name of John Jenkins for stealing a safe. A month later, the San Francisco Vigilantes lynched James Stuart who was also a deported criminal from Sydney, Australia.

The vigilantes primary target was the Sydney Ducks. As I've said in other articles on this, during the California Gold Rush, not everyone coming to California came to dig for gold. Yes, there were those who saw miners and others as easy pickings. Criminal types, no matter if they were shifty gamblers, con artists, swindlers, and other lowlifes, saw hard working people as suckers to be fleeced or worse.

Since San Francisco was the primary destination inside the Golden Gate for all coming by sea, that city had a boom in population as no other. But, along with the good came the bad apples. Among those who wanted to prey on others was Samuel Whittaker and Robert McKenzie who had also arrived from Australia.

Starting in 1788, Australia was a British penal colony that would see over 160,000 prisoners being sent there from England and Ireland over the years. In 1849, with the influx of people coming to California, the Australian authorities saw a way of unloading part of their prison population on San Francisco. Their deported convicts were known as Sydney Ducks. Known for running protection rackets targeting businesses who were made to pay up if they don't want to be fire bombed, it is believed that they were responsible for committing devastating fires starting in 1849. And besides their committing arson, the Sydney Ducks were known killers and thieves.

Mistakenly thinking he was going to save his own neck, Stuart informed on a number of his Sydney Duck cohorts. Of course, he was hanged and never saw Whittaker and McKenzie apprehended on his information. Stuart also never saw the Vigilance Committee rid San Francisco of his cohort pals.

The Sydney Ducks was the reason for the formation of the first San Francisco Committee of Vigilance of 1851. At that time, vigilantes conducted unlawful apprehensions of Sydney Ducks, beat confessions out them, held secret trials, deportations, and at least four lynchings while bypassing those in political power. While that's true, it might interest folks to know that they did hold their own investigations of those they apprehended, and in fact held their own secret trials before determining sentences. That's the reason some of the Sydney Ducks were banished by putting them on ships leaving San Francisco while others like Whittaker and McKenzie were hanged.

There is something to be said about Whittaker and McKenzie that can't be said about too many men who were hanged by vigilantes. They were stolen twice. It's true. After being apprehended by the vigilantes and keep at their headquarters, a few days latter the Mayor and County Sheriff John Coffee Hays, along with some deputies, made a surprise raid on the Committee of Vigilance headquarters. They took Whittaker and McKenzie to the county jail. That was on August 20th, 1851.

The first San Francisco Committee of Vigilance of 1851 had over 700 members. After reconsidering the loss of their prisoners, 36 Vigilance Committee members barged into the jail and overpowered the few deputies on duty. That was August 24th. It's said that when the Sheriff found out what took place, he rode back to town immediately. By the time he returned, Whittaker and McKenzie had been hanged.

A few weeks after the hanging, the first San Francisco Committee of Vigilance of 1851 disbanded itself. In the end, the vigilantes got what they wanted and effectively wiped out the Sydney Ducks. Because they accomplished what they set out to do, and rid the city of the Sydney Ducks, they saw themselves as not being needed. Besides, it's said that they made there point about being present if things got out of hand again. Sadly, it did and they rose up again in 1856. That next time, they were 6,000 strong. Yes indeed, the largest vigilante force in the history of the United States.