Mike Bloomberg Thinks Blue-Collar Americans Are Stupid -- He Really Does! 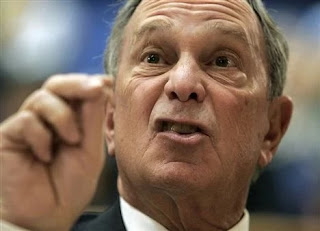 Condescending Mike Bloomberg Is A Snob Of The Worse Sort --He Looks Down On Us While Wanting To Be Our President. And Worse, He Wants A Dictatorial Government.

Mike Bloomberg's supporters are pushing their Leftist propaganda about how the Republicans are supposedly making up lies about what Bloomberg is saying. They should think about how their boy Bloomberg is as dumb as a box of rocks when it comes to what America needs. While President Trump has created positive changes for all Americans, as with all of the Democrats running for president, Bloomberg also wants to undo those things that have put up into an era of prosperity and greatness.

As for Mike Bloomberg's condescension toward everyday Americans, it is legendary. Frankly, after hearing what he said about the Mid-West and specifically farmers, it's really no wonder that he decided not to go to the Democrat's Iowa caucus. Bloomberg thinks farmers and manufacturers all across America are stupid.


You think I'm over-exaggerating, well I'm not. In fact, a video clip has recently surfaced from 2016 when Bloomberg was speaking at an event. I believe it was while he was speaking at Oxford University's Said Business School. He told those in attendance, "Anybody [can] be a farmer."

Bloomberg said, "I could teach anybody – even people in this room, no offense intended – to be a farmer. It's a process. You dig a hole, you put a seed in, you put dirt on top, add water, up comes the corn. You could learn that."

Of course, Mike Bloomberg is a wealthy snob who doesn't know his history very well. Or maybe he simply thinks Thomas Jefferson who wrote our Declaration of Independence was stupid. After all, Thomas Jefferson like many of our Founding Fathers were farmers.

And if you think he only looks down on farmers, think again. He also looks down his nose at other blue-collar workers such as the millions of Americans who work in manufacturing and the trades. Bloomberg thinks they are stupid as well. He said, "Then we had 300 years of the industrial society. You put the piece of metal in the lathe, you turn the crank in direction of an arrow, and you can have a job."

Bloomberg says tradesmen, manufacturers, and farmers are stupid, but he says it takes "a lot more gray matter to think and analyze enough to work in the tech field. He actually said that having a job in information technology is "fundamentally different, because it's built around replacing people with technology and the skill sets you need to learn are how to think and analyze and that is a whole degree level different, you need to have different skill set. You have to have a lot more gray matter."

His "better and smarter than others" attitude is typical of the Democrats running for office these days. And frankly, his condescension and believing Americans are stupid actually answers why he believes Americans need to have their freedoms taken away from them -- no differently than how Democrat Plantation owners saw the freed slaves after the Civil War. After the Civil War, Democrats who started that war and created the Ku Klux Klan saw freed black slaves as too stupid to be free. They saw them as needing to be cared for like children. After all of these years, it's apparent that nothing's changed in the Democrat Party

You think I'm exaggerating. He really believes that Americans need a government that tells us how to live. He is quoted as saying, "there are times when government should infringe on your freedom."

He feels he's that "somebody" who should be making decisions for us. The Slave Master mentality of the Left has no bounds. That is why people should understand that Mike Bloomberg wants a Dictatorial American government. He wants a Nanny State. He wants an oligarchy government run by the Democrat Party.


As for his believe that Americans should not own guns and the 2nd Amendment should be repealed, he has made no secret of this and has led an effort to instate more anti-gun laws which he thinks saves lives. Let's get this straight, he wants to disarm law abiding citizens -- not criminals. He thinks you and I don't have the right to defend ourselves with guns.

He really believes that the State in the form of the police can be everywhere, and that we should rely on the police to protect us. It's a shame Bloomberg is too dumb to know that the US Supreme Court has ruled in a number of cases that law enforcement agencies are not required to provide protection to the American citizens. Maybe if he knew that, he think twice about enabling Americans to provide their own security as is our American right. But frankly, I doubt it since that little jerk loves to make excuses for America having to have a Nanny State.

And besides believing that no America should own a gun, he really believe that he is smarter than the average American. If anyone thinks that's a creation by some supposed Republicans "machine", listen to Bloomberg's own words. While explaining his position on transgenders, Bloomberg said only he and the "intelligentsia" are the only people who can understand why "some man wearing a dress should be in a locker room with their daughter."


He takes this position that most Americans just aren’t smart enough to grasp what we need. For example, pertaining to our rights and needs, Bloomberg has said, "We, the intelligentsia ... we believe in a lot of things in terms of equality, and protecting individual rights, that make no sense to the vast bulk of people." He's talking about allowing so-called transgender men in girls locker-rooms, on girls sports teams, and in women's bathrooms.

He has even said, "If you want to know if someone is a good salesman, give him the job of going to the Midwest and picking a town, and selling to that town the concept that some man wearing a dress should be in a locker room with their daughter. If you can sell that, you can sell anything. I mean they [people in the Midwest] just look at you and say, 'what on earth are you talking about'?"

Bloomberg is absolutely amazed that Americans are repulsed by men in girls locker-rooms or in the same rest-room as your young daughter. If that in itself doesn't convince his Democrat supporters how out of touch Bloomberg really is, nothing will.