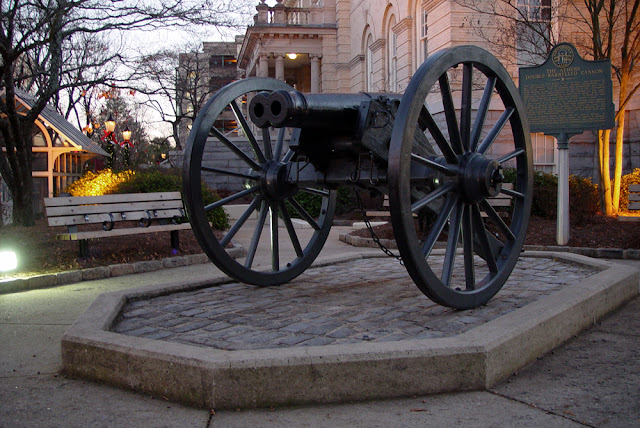 The story of the double-barreled cannon has to do with an experimental weapon during the Civil War. Of course, while that's true, the concept of such a field piece goes back to an arms maker in Italy in 1642. That particular gun maker did in fact cast a double-barrel cannon which was intended to be fired simultaneously. It was designed to fire two cannonballs linked by a chain from its side-by-side barrels. The rounds were to act as a mower or sickle to cut down enemy soldiers as if they were wheat. Imagine that!

In 1862, an Athens, Georgia, dentist by the name of John Gilleland, no relation to Georgia dentist Doc Holliday, raised money from Confederates there and cast a double-barrel cannon. It had twin side-by-side 3 inch bores. As with the Italian gun maker's design of 1642, Gilleland's cannon was designed to simultaneously shoot two cannonballs connected with a chain. For things to work out without a hitch, simultaneous ignition was key. The powder in each barrel had to ignite at the exact same moment in time to have things go well. An instant off in either barrel meant trouble.

April 22nd, 1862, was the day of the first test of the Gilleland cannon. It's said that his double-barrel cannon was aimed at a couple of upright poles. The poles were going to be used to gauge the effect of the shot so that it could be accurately measured. Well, as with the best laid plans of mice and men, the powder ignited unevenly.

Because of that and imperfections in the casting process, the twin barrels gave the connected balls a spinning movement in a direction other than where the targets were located. Witnesses reported that its rounds "plowed up about an acre of ground, tore up a cornfield, mowed down saplings, and then the chain broke, the two balls going in different directions."

And no, things didn't go any better during the second test. During its second test, the chain broke when the barrels ignited a second or two apart and subsequently shot that chain over the horizon. Witnesses during the second test reported, "The thicket of young pines at which it was aimed looked as if a narrow cyclone or a giant mowing machine had passed through it."

On its third and last test, when fired, the chain snapped almost instantly. With that, one cannonball slammed into a nearby cabin and took out its chimney. The other cannonball took off in a whole different direction and killed a cow.

So believe it or not, during those tests, the Gilleland cannon mowed down trees, cut through a cornfield, and showed that it was capable of taking out a cabin and killing a cow who wasn't a threat to the Confederacy. Were those trees, cornfield, cabin, or that cow even near the intended targets of Gilleland's double-barrel cannon? No. Not even close. In fact, none of those things including that poor cow were reported to be anywhere near its actual targets or impact area.

Because it was such a failure, the Confederacy didn't want anything to do with it. In fact, no matter how much Gilleland tried to pawn it off on the Confederates, no one in the South's military wanted it. But its rejection wasn't the end of the story of Gilleland's double-barrel cannon. The folks in Georgia agreed to use if as a blank firing signal cannon to be used to warn the city of Monroe in the event of approaching Union troops.

On July 27th, 1864, Gilleland's double-barrel cannon was actually fired once for just that reason. It was on that day when there was a report of several thousand Union troops being sighted approaching Monroe. The Gilleland cannon was loaded with shot but not cannonballs, it was readied and fired to signal the city that Yankees were advancing on Monroe. The cannon's signal did in fact incite mass hysteria in the city of Monroe. The hysteria died down and calm was regained in the city later when it was found that the reported sighting of Union troops turned out to be false.

While that was the last time it was fired, today Gilleland's double-barrel cannon is on display in front of the City Hall of Athens, Georgia. As part of the Downtown Athens Historic District, it's said to be one of the city's most popular and well-known attractions there.

And while Gilleland's double-barrel Civil War cannon never saw battle, and is today a very popular landmark, the folks in Athens, Georgia, found it fitting to point it facing north when they positioned it in front of their City Hall. Though it never used in battle, some say it's pointing North as a symbolic gesture of defiance against the Yankees that it was built to fight. Of course there are those who say the Yankees probably had spies in the South who reported how it was useless weapon all the way around. Unless of course the target was something other than what was being aimed at.