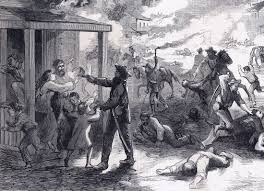 This is just a short tale of something that happened during the Civil War. It has to do with the practice of Confederate troops killing prisoners of war. One Union commander found a way to stop local Confederates from doing just that. Below is the correspondence between that Union commanding officer and the Confederate commander.

In May of 1863, near the town of Sherwood, Missouri, an exchange of letters took place between Union Colonel James M. Williams, 1st Kansas Colored Infantry, and Confederate Major Thomas R. Livingston, commander of the "Partisan Rangers". The letter is in regards to the treatment of captured black Union troops held by Major Livingston's command.

In the letter to Major Livingston, dated May 26th, 1863, Colonel Williams states:

"I desire to call to your attention to the fact that one of the colored prisoners in your camp was murdered by your soldiers. And I therefore demand of you the body of the man who committed the dastardly act. And if you fail to comply with this demand, and do not do so within forty-eight hours, deliver to me this assassin, I shall hang one of the men who are now prisoners in my camp."

"I confess my surprise that an officer of your rank should have fixed such conditions to your demand as you are doubtless aware that the one who committed the offense charged is not a member of any company over which I have any control, but was casually at my camp and became suddenly enraged and an altercation took place between him and deceased which resulted in a way I very much regret, and that said offender's whereabouts are to me unknown, consequently making it impossible for me to comply with your demand."

Colonel Williams ordered that one of the Confederate prisoners in his possession be shot and that prisoner's body be returned to Livingston personally while under a flag of truce. Colonel Williams' orders were carried out within a matter of thirty minutes. And right after that, he informed Major Livingston of his action.

It's said that that ended the practice of the Confederates murdering prisoners of war black or white. At least that was the case in Missouri since Major Livingston's command never again murdered Union prisoners.

So who was Confederate Major Thomas Livingston?

Jayhawkers were militant bands affiliated with the free-state cause during the Civil War. They were marauding gangs who were guerrillas. But make no mistake about what they did, they more than not fought pro-slavery groups such as the "Border Ruffians" or "Bushwhackers" in the Kansas Territory.

At the start of the Civil War in 1861, Livingston joined the Confederacy by joining the 11th Cavalry Regiment of the Missouri State Guard as a Captain. As a Captain, he commanded a Confederate cavalry battalion which became known as "Livingston's Rangers." As insurgents creating chaos and death, they were authorized under the Partisan Ranger Act of the Confederate government to conduct guerrilla attacks. Because the Confederacy knew there was no way for them to conquer and hold Missouri, their plan was to destroy and terrorize Missouri using guerrilla warfare.

Livingston entered Jasper County, and then over into Arkansas and Indian Territory. Union Colonel James M. Williams, 1st Kansas Colored Infantry, was advised of Livingston's policy of shooting Union prisoners -- especially black Union troops who he had a personal grudge against. Because of his actions which was seen as barbarism even by the standards of the times, he was labeled an "Outlaw Bushwhacker."

On July 11th, 1863, Livingston led his Partisan Rangers northeast to Stockton, Missouri, with the plan of capturing Union supplies at a small Union garrison there. His unit of 250 cavalry surprise the town. Against them was 20 Union militiamen who sought cover in the town's courthouse. Those 20 made a stand and actually survived against overwhelming odds.

In fact, during the attack, one soldier in that group of 20 Union militiamen, of those who were holed up in the courthouse, actually shot Livingston out of his saddle. Soon after that, thinking their leader dead, Livingston's men retreated.

After the fight, the 20 Union militiamen emerged from the courthouse. It's said it was then that they looked over the dead Confederates and found the wounded Major Livingston. Some say he reached for a rifle as they approached him. Others say he tried to get to his feet. Other say he simply laid there in pain begging for help. Fact is no one really knows what happened to make those Union militiamen shoot Livingston to pieces, but they did just that. And some say, it was done to make sure he was dead.

From there, he and the other dead Confederate invaders were buried in a mass grave. With Major Livingston's death, his leaderless battalion disbanded. And while it is said that some of his men may have fought on with other Confederate guerrilla groups bend on pillaging, burning, and murder, there were those who celebrated knowing that Livingston's guerrillas would not bother anyone again.