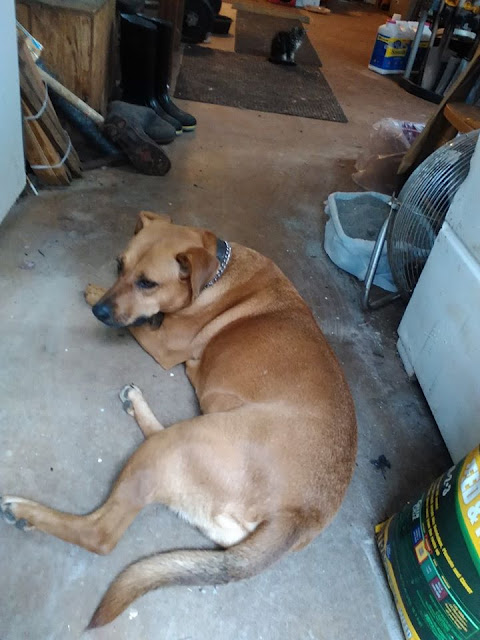 About 8 years ago, I wrote about how my dog Jake died suddenly. Yes, very suddenly. I pulled up that day and my father-in-law said, "I think Jake is dead."

He was right. My big very healthy looking dog that I had for a couple of years had simply died after playing with my in-laws' dog Oliver. It was a shock to my system. I think the reason that it was such a shock has to do with my being retired and having so much time to spend with him. Though my wife also loved the brute, he was really my big brown dog. He kept an eye on me late into the night while I sat here writing, and then he was gone.

About a year after losing Jake, my wife and I talked about getting another dog. Again, we went to the pound looking for a dog to rescue. Since I have a liking for a basic brown dog, we found a smaller version of Jake.

We were told she was two or less when she was picked up. And when we first saw her, my wife and I saw she was just a sweetheart looking for a home. We gave her one. We called her Holly. And I really believe she loved her name.

That was seven years ago. And today, well today Holly passed away.

Over the last two days, she acted as if she picked up a bug. She wasn't moving as fast and she wasn't taking her treats as she would. And friends, she lived for treats.

This morning, my wife woke me up telling me that Holly was wobbly and couldn't stay on her feet. Immediately, we decided to get her to a Vet. We called our Vet located in San Andreas to see if she could fit us into her busy schedule. We arrived before 11am and immediately the Vet ordered blood work and tests. She told us to go grab lunch and be back at 1pm.

When we returned, she told us that she believed Holly had Autoimmune Hemolytic Anemia. She then explained that autoimmune hemolytic anemia is an immune system disease in which the body attacks and destroys its own red blood cells. In dogs with autoimmune hemolytic anemia, their red blood cells are still being manufactured in the bone marrow -- but once released into the circulation, they simply don't stay around like they should.

With secondary autoimmune hemolytic anemia, the surface of red blood cells actually become changed by some underlying disease process or by way of a toxin or poison. The dog's immune system then recognizes the changed red blood cells as "foreign invaders" that must be destroyed.

The biology behind all of this says that the targeted red blood cells are either destroyed within the blood vessels or when they circulate through the liver or spleen. In both situations, hemoglobin will be released. When that happens the liver will attempt to break down the excess levels of hemoglobin. This actually has the effect of overloading a dog's organs.

What are the symptoms of autoimmune hemolytic anemia? Well, dogs with autoimmune hemolytic anemia have severe anemia, and their gums will be very pale rather than the normal pink to red color. Dogs with anemia will be listless and tired or will get tired easily. The reason for this is that the dog doesn't have enough red blood cells to carry oxygen to the tissues. Because of that, a dog may actually appear wobbly and disoriented due to low oxygen levels in the brain. To compensate for the lack of oxygen to the tissues, their heart rate and their breathing increases.

As things go along, excessive levels of bilirubin will build up within the dog's body. Excessive levels of bilirubin cause the skin, eyes, and gums to appear yellow and jaundiced. The dog may vomit, and lose it's appetite. If a dog's autoimmune hemolytic anemia is so severe that it is life-threatening, then a blood transfusion will be needed. Understand, blood transfusions can cost $2,000 or more depending on where you take your dog.

We got her from the pound and we were gifted to have her as a part of our family for the last seven years. She was a great companion. She was great around strangers, children, and other dogs. She was a lover dog, a wonderful friend, a dog that would lick you to death.

She loved being told she was pretty. Her tail would wag even faster when she heard us say that. She loved to go on rides and would jump at the chance to jump in my truck to go get our mail or run others errands. All I had to do is say "Let's go for a ride" and she instantly became the happiest dog in the world. Though sick, tonight I took her for a ride. The reason, I wanted her to because it could be her last. Sadly it was.

Over the years, she would watch over me when I went out to feed the horses. She actually looking forward to it, and when I'd say "Let's feed horses" she run to the door. And as for her telling us what she needed, she would let us know what she needed by pawing us to get up from watching a television show -- or for me to get away from my keyboard.

I buried Holly on our property near where Jake and my horse Murphy are buried. Tonight, I dug a grave for our lover dog. It was something that I really wasn't looking forward to. I am not going to say that I didn't know that this day would come. I just wish it was a few more years down the road.

No longer will I call out for my Holly girl. No longer will she give us love on a bad day, or make the world a better place. I can only hope that I will be with her again. Until then, I will miss her scratching at the door. I will miss our pretty girl.

There are reasons why I cried while I buried her tonight. Simply put, she was a love. And as for me, my one comfort is that I really believe she knew she was loved.