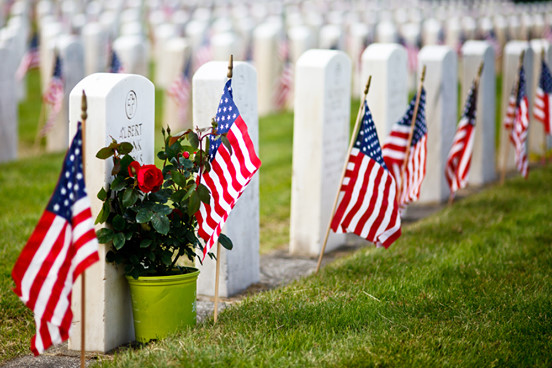 "They shall grow not old, as we that are left grow old:
Age shall not weary them, nor the years condemn.
At the going down of the sun and in the morning
We will remember them."

For The Fallen by Robert Laurence Binyon

When I was much younger and fresh out of the Marine Corps in the late 1970s, I remember driving by a cemetery full of American flags and what looked to be a Memorial Day observance taking place. The sight, the color, the breeze, the movement atop every grave, the sight of the people gatthered, all grabbed me for a second. I pulled in and stopped. After getting out, I found that I just missed the ceremony.

For some reason, I started walking the graves, reading the stones, the names, the dates, seeing which were veterans, from which war. Of course wondering if there were those my age when they died.

A few rows over from where I was, I saw an old woman sitting on a stone bench just looking at a headstone. She said quietly just taking in the moment. Though there were many others there that day, for some reason, she looked over at me and nodded with a small smile. I smiled back and nodded my hello. In her hands was a rosary and what looked like some tissue.

I have no idea why, but for some reason I found myself slowly making my way over to her. I don't know if it was curiosity and my wanting to see the stone she was looking at so peacefully. I don't know if I just wanted to see what branch he was in, that is assuming that he served. For whatever reason, I found myself drawn to the old woman side.

She looked up at me, then she said, "He's my husband."

I nodded looking at the stone, seeing his name, his rank, his branch of service, his war, and the date he passed. The sentiment on the bottom. I noted the empty space on the stone, and figured that it was for her.

"He died after being home for only a few months," she sighed. "He was wounded and shipped back to the states. We all thought he would be fine. At least that's what we told ourselves. That's what we kept telling him to give him hope. You can't lose hope."

I listened, and didn't say a word.

"He was overseas. Almost thirty, he was older than most of the others. He was a good Soldier." She smiled still very proud of him. "He was a good man. He liked the service. He did his job. He did his part. We all did in those days. We did what was needed."

She took in a breath and slowly sighed again, "We were married for a few years when the war broke out. We were happy to have jobs again. Times had been so tough. And we had so many plans. Of course, one day, well one day we'll be together again. But until then."

I listened and simply nodded in agreement. I looked at her, and watched the years in her eyes as a tear streamed down her cheek. She shook her head a little as if shaking off a regret and reached over to squeeze my hand. Here was this old woman who I didn't know. And for a moment, she seemed so frail and worn beyond her years. It was as if she were tired from waiting. And she needed to be there and tell a stranger their story.

"After he enlisted, we had only a short time together before going overseas. I was a real camp follower because we knew he might not come back, and we wanted as much time together when we could. We didn't talk about that. But of course, that didn't matter. I understood why he needed to go. He wasn't a shirker. No, not him. When he was needed, he went. He was gone for two years. Then when he came home. Well, so many surgeries later, he still died."

She reached up to wipe a tear. "He died for me, our daughter, our grandchildren. For all of us I guess. He is still the man of my dreams. He's still my hero. After all of these years, I still miss him."

I said. "Lest we forget. He should not be forgotten. There's nothing wrong with being always faithful. It's just right."

Her grandson who was over talking with some friends came over to help her. He said, "Thanks," and shock my hand. Then said, "She still misses grandpa. Especially today. It's their anniversary."

Things seemed to stand almost at a still while she reminisced for those few moment and tell me of her love. Soon, I again looked at the small flags caught in the breeze. It was Memorial Day, and in the distance I watched flag bearers and a civilian honor guard still present from a ceremony which must have ended just before I arrived.

I couldn't help but think about the honor guards that I've been a part of while in the Corps. For a moment, I thought about the funerals, the ceremonies, and how the speakers always talked about love of country and those who make the ultimate sacrifice. They talk about the history of Memorial Day and why it's so important for us to observe those who made sure our freedoms are intact -- about how it's our responsibility to not let their deeds nor their sacrificed be forgotten, how we should not forget them.

That was more than 40 years ago. I still remember the woman in her late-sixties who seemed older than her years. The loving wife who still wept for her beloved husband gone more than 30 years before. I remember how she missed him still.

She held on to the promise that we will again be united with those we love. While I believe that those who are dear to us do not stop loving us just because they die, we must do the same and not stop loving them because they have gone before us. While I have no idea if she's still with us, I believe her husband knew how much she loved him, how proud of him she still was, and how she still saw him as her hero.

For me, every once in a while, when I pass a graveyard on Memorial Day weekend, I'll see the flags and wonder if there is another loved one missing their hero. After all, they should not be forgotten. And frankly, there's nothing wrong with being always faithful. It's just right.

Tom Correa
Posted by Tom Correa at 3:33 AM