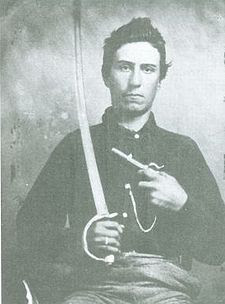 I received a letter the other day from a reader who says he doubts there was ever a man known as Texas Jack Vermillion. He said that he thinks "the Texas Jack Vermillion character portrayed in the 1993 film Tombstone is completely fictitious and was only created for that movie, no differently than how other people are invented in other movies." In his letter, he said that he did research and found several "Texas Jacks" but still does not believe that they were real people.

Granted, we don't know too much about his early years or the exact location of his birth. But we know that he was the second of 12 children born to William Vermillion and Nancy Owens, and his birth name was John Wilson Vermillion. He was born sometime in 1842 somewhere in Russell County, Virginia.

Some reports suggest that he was a small man, a man of slight build, only about 5' 2" tall, and weighed in at around 125 lbs. throughout his life. It is known that he enlisted in the Confederate Army when the Civil War started in 1861. According to his biography, he was actually in the Confederate Cavalry unit commanded by General J.E.B. Stuart. I haven't been able to find out if he was with Gen. James Ewell Brown "Jeb" Stuart the entire war or when Gen. Stuart died on May 12, 1864.
Some reports say he also served under Confederate Gen. Nathan Bedford Forrest. This is believed to be the case after leaving Jeb Stuart's unit. Of course, his serving under Gen. Forrest adds to the myth that he may have been a founding member of the Ku Klux Klan after the war ended. While some say Gen. Forrest was instrumental in starting the KKK, other reports say Forrest was not since he joined the Ku Klux Klan two years after its founding. We do know that Forrest was elected the Klan's first Grand Wizard.
Though that is not verified, Jack Vermillion had gone to Pulaski, Tennessee, after the war. Pulaski is the birthplace of the Ku Klux Klan. After that, he was in Sullivan County, Tennessee, where he supposedly married Margaret Horton on September 6, 1865. Legend says that the couple moved from there to Eastern Missouri. There also reports that say he may have taken a position as a Deputy U.S. Marshal there.
As for his family, it's said that they had a daughter and a son. That was at the same time that a diphtheria epidemic hit Eastern Missouri. The epidemic is said to have killed his wife and children while he was away. Supposedly after that is when he moved West, where he surfaced in Dodge City, Kansas. It is also said that he reported ended up in Montana about that time.
It was in Tombstone, Arizona, in either 1880 or 1881, that Jack Vermillion reportedly killed a man. While I haven't been able to find any record of anyone by his name or alias as killing anyone in a gunfight over cheating at cards or otherwise, I believe that's just the myth.
That myth also states that the gunfight was seen as unfair by the local law at the time, and Jack became a wanted man with a bounty on his head. Supposedly, it was on the Wanted Poster that he first became known as "Texas Jack" Vermillion though no one knows why he would have been called "Texas Jack." As for the story of him being on the run from the law there in Tombstone, if he were on the run and supposedly fled Tombstone, what was he still doing in Tombstone in 1882 when he joined the Earp vendetta?
But before we go on, the question comes up, why was John Wilson Vermillion known as "Texas Jack" since he was actually from Virginia? As with many folks who pick up a handle for reasons unknown, one story has to do with his love of Texas horses.
During the Civil War, horses in the Southeast were being depleted pretty quickly. Many there were seen as "half-starved plodding animals pulling tons of supplies over muddy tracks." Because of the need for horses, especially cavalry horses, horses were brought in from Texas. Let's remember that Texas was on the side of the Confederacy and contributed both horses and manpower to the war effort.
So, would it be unusual for someone in the Confederate cavalry to prefer fresh Texas mounts? Probably not. Was that enough to earn him the name Texas Jack? I don't know if any of us will ever know the answer to that question. For me, I saw guys in the service get saddled with a nickname for less than that, but who knows -- especially when he was supposedly known later to some folks in Idaho as "Shoot-your-eye-out-Jack."
As for his shooting someone that can be verified, we know that in Tombstone, Arizona, Jack did ride with Wyatt and Warren Earp, Doc Holliday, Sherman McMasters, "Turkey Creek" Jack Johnson during the vendetta ride. We do know that he was later named in the murder charges of Frank Stilwell along with Wyatt and Warren Earp, Doc Holliday, and the others later.
Was he was one of the men who, along with Wyatt and the others, took turns shooting the already dead Frank Stilwell with multiple weapons? Probably not since it's believed that he joined the Erap vendetta ride the day after the Earps and the others murdered Stilwell. But, he was with Wyatt and the others when they fled Arizona after a Grand Jury charged them with First Degree murder in the death of Stilwell.
After fleeing Arizona one step ahead of the law, it's said he returned to Big Stone Gap, Virginia, in 1883. While there, he supposedly married again. But some question that since it's believed that he was in Colorado with Wyatt in 1884 and then part of the Soapy Smith Gang in Idaho by 1886. It was with this outlaw gang that he picked up the name, "Shoot-your-eye-out-Jack." And really, while that sounds like that could be an interesting story, I haven't been able to find out what's behind it.
At a family reunion in 1900, he was photographed with a woman who was said to be his wife. In 1911, Shoot-your-eye-out-Jack passed away quietly in his sleep. Such is the tale of Texas Jack Vermillion.