24 Notes That Tap Deep Emotions -- The Story Of Taps 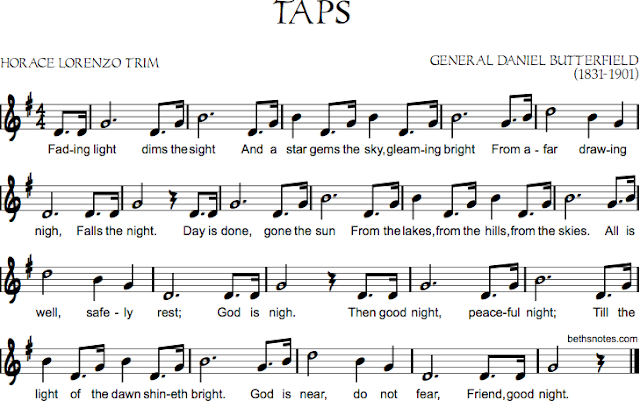 What is Taps?
The bugle call "Taps" signals that unauthorized lights are to be extinguished. This is the last call of the day. The call is also sounded at the completion of a military funeral ceremony. The story below is of how Taps came about. I'm posting the story of "Taps" as written by someone who is considered a "Taps Historian." His article is below:
24 Notes That Tap Deep Emotions
by Jari Villanueva, Taps Historian

Of all the military bugle calls, none is so easily recognized or more apt to evoke emotion than “Taps.” The melody is both eloquent and haunting and the history of its origin is interesting and somewhat clouded in controversy and myth.
The use of “Taps” is unique to the United States military, as the call is sounded at funerals, wreath-laying ceremonies and memorial services. “Taps” originally began as a signal to extinguish lights. Up until the Civil War, the infantry call for “Extinguish Lights” was the one set down in the Infantry manuals which had been borrowed from the French.
The music for “Taps” was changed by Major General Daniel Adams Butterfield for his brigade in July, 1862. Butterfield was not pleased with the call for “Extinguish Lights” feeling that it was too formal to signal the day’s end.
With the help of the brigade bugler, Oliver Willcox Norton, he created “Taps” to honor his men while in camp at Harrison’s Landing, Virginia following the Seven Days’ battles during the Peninsular Campaign. Butterfield did not compose “Taps” but actually revised an earlier bugle call. The call we know today as “Taps” existed in an early version of the call “Tattoo” which had gone out of use by the Civil War.
Butterfield knew this early call from his days before the war as a colonel in the 12th New York Militia. As a signal at the end of the day, armies have used “Tattoo” to alert troops to prepare for the evening roll call. Butterfield took the last 5 and a half measures of the “Tattoo” and revised them into the 24 notes we know today. The new call soon spread to other units of the Union Army.
Oliver Willcox Norton wrote about the experience later in his life:
“During the early part of the Civil War I was bugler at the Headquarters of Butterfield’s Brigade,... One day, soon after the seven days’ battles on the Peninsular, when the Army of the Potomac was lying in camp at Harrison’s Landing, General Daniel Butterfield sent for me, and showing me some notes on a staff written in pencil on the back of an envelope, asked me to sound them on my bugle. I did this several times, playing the music as written. He changed it somewhat, lengthening some notes and shortening others, but retaining the melody as he first gave it to me. After getting it to his satisfaction, he directed me to sound that call for “Taps” thereafter in place of the regulation call. The music was beautiful on that still summer night, and was heard far beyond the limits of our Brigade. The next day I was visited by several buglers from neighboring brigades, asking for copies of the music which I gladly furnished. I think no general order was issued from army headquarters authorizing the substitution of this for the regulation call, but as each brigade commander exercised his own discretion in such minor matters, the call was gradually taken up through the Army of the Potomac.”
The earliest official reference to the mandatory use of “Taps” at military funeral ceremonies is found in the U.S. Army Infantry Drill Regulations for 1891, although it had doubtless been used unofficially long before that time, under its former designation, “Extinguish Lights.”
The first use of “Taps” at a funeral was during the Peninsular Campaign in Virginia. Captain John C. Tidball of Battery A, 2nd Artillery ordered it played for the burial of a cannoneer killed in action. Because the enemy was close, he worried that the traditional three volleys would renew fighting.
The origin of the word “Taps” is thought to have come from the Dutch word for “Tattoo”- “Taptoe.” More than likely, “Taps” comes from the three drum taps that were beat as a signal for “Extinguish Lights” when a bugle was not used.
Other stories of the origin of “Taps” exist. A popular myth is that of a Northern boy who was killed fighting for the South. His father, a Captain in the Union Army, came upon his son’s body on the battlefield and found the notes to “Taps” in a pocket of the dead boy’s Confederate uniform.
There is no evidence to back up the story or the existence of the Captain or his son. As with many other customs, the twenty-four notes that comprise this solemn tradition began long ago and continue to this day. Although General Butterfield merely revised an earlier bugle call, his role in producing those twenty-four notes gave him a place in the history of both music and of war.
Today, “Taps” is sounded as the final call every evening on military installations and at military funerals. In 2012 Congress recognized “Taps” as the “National Song of Remembrance.”
More information on Taps and bugling in the United States can be found at www.TapsBugler.com “There is something singularly beautiful and appropriate in the music of this wonderful call. Its strains are melancholy, yet full of rest and peace. Its echoes linger in the heart long after its tones have ceased to vibrate in the air.”- Oliver Willcox Norton
The above information has been taken from the Veterans Affairs website:
https://www.va.gov/opa/publications/celebrate/taps.pdf
Tom Correa
Posted by Tom Correa at 8:49 PM