On March 5th, 1931, The San Saba News and Star reported the following on Page 2:
As told to Annie Dyer Nunn
by Charles Goodnight

Charles Goodnight, one of the first pioneers of the Panhandle, was known as a breeder of buffaloes and cattaloes. The cattalo is a cross-breed between buffalo and native cattle. His old ranch near Clarendon, Texas, where Col. Goodnight lived for half a century and where he established his buffalo herd, still flourishes and is known far and wide as a breeding ground for the native buffalo. Colonel Goodnight died December, 1929.

His knowledge of the buffalo in its native habitat dates back to the year 1845 when, as a child he saw buffalo grazing west of the Cross Timbers in Central Texas. He knew them in the ’60s when their numbers had increased to over two millions. He knew them in the ’70s–those years that marked their passing–when hunters killed them by the thousands for either mere sport or for the hides, which sold in the open market; from 10 cents to one dollar each.

“When you were in the buffalo country,” related Colonel Goodnight, “you were in it, that’s all. Buffaloes meant buffaloes by the hundreds of thousands. The prairies were literally thick with them. In all directions, as far as the eye could reach, there was a sea of these moving animals. They ranged, for the most part, in groups as close together as they could conveniently graze. They migrated from necessity only. I have known small herds to haunt some particular region for years, but the main herd, due to scarcity of grass or water at certain season of the year had to move or die.
The “Southern” and “Northern” Herds

“There were two main herds in the United States–the southern and the northern,” said Mr. Goodnight. “The southern herd ranged south of the Arkansas River, through a portion of Kansas, Oklahoma and Texas; the northern herd stayed north of this river, in Kansas, Nebraska, Wyoming, Montana and Dakota.

“While the Civil War was in progress I was with Norris’ regiment of Texas Rangers, fighting Indians on the frontier, and during that time I was in close contact with the southern herd. After the war, as a drover, trailing cattle from Central Texas into New Mexico and Colorado, I was still in the heart of the buffalo country–for the next ten years, in fact, which was as long as the southern herd continued to exist.

“The herd would come into southern Texas for the winter, returning northwest into New Mexico and Kansas when the grass started; but not until it did start. I had good reason to remember this peculiarity, as the result of an experience I had on the trail when in 1867, I was retuning home from Fort Sumner, New Mexico, where I had gone to deliver 3,000 head of steers.

“Although it was the latter part of June and grass, owing to a drouth, barely up, the buffalo were still on their winter ground. Incredible numbers had died from starvation, and everywhere I looked I saw hundreds of carcasses rotting in the sun. The odor was fearful and the air black with flies. For two days and two nights my course led me through this belt of dead buffalo and desolation.
Killing for Commercial Purposes

“In the United States buffalo hunting for commercial purposes had been going on more or less since 1830, but in 1868 it began in deadly earnest. By this time wholesale decimation from every conceivable quarter descended upon the buffalo. They were slaughtered for meat by the settlers and by Indians in Texas, Oklahoma, New Mexico, Kansas, Colorado and Nebraska; by professional hunters employed to supply meat to military forts and railroad construction companies; by “sportsmen” who killed merely because they could kill.

I have seen passengers on a train, which had been held up by a herd that was slowly crossing the track, shoot buffalo for hours at a time.

The performance of the sportsmen was to me one of the most distressing features of buffalo extermination. The majority killed needlessly and with ruthless abandon. I have seen passengers on a train, which had been held up by a herd that was slowly crossing the track, shoot buffalo for hours at a time. Hundreds were slaughtered in this was, while others were wounded and left to a lingering death. For years the most conspicuous objects along western railroads were bleaching bones of these defenseless creatures that had furnished “sport” for passengers.

“There are stories of wanton slaying of buffalo by Indians, but I know this did not occur in the southern herd. The Indians killed what they could use and no more. They were maddened beyond measure by the wholesale slaughter of buffalo that was being waged all around them. It was the main cause of the Adobe Walls battle which occurred in Texas in 1874 between Indians and buffalo hunters. Buffalo meant everything to the Indians–food the year round, hides for tepees, robes to cover their bodies, etc.

Hide Hunters by the Thousands

“With the completion of the Union Pacific and the Kansas Pacific railroads in 1868 and ’70, buffalo hide hunters poured into the country by the thousands. They made military forts their bases of supply and their ammunition centers. There were some good men among the hide hunters but, generally speaking, they were a hard lot.

“At one time it was estimated there were 3,000 buffalo hunters in the Panhandle of Texas. From sun-up until sun-down their guns boomed death and destruction. Seasoned frontiersman though I was, I could never become inured to these scenes of brutal and wanton butchery. The buffalo had to go, of course, but there was no excuse for the hurry, waste and savagery that attended their extermination.

“Sharpshooters were employed mainly. The hunters moved in companies of from four to fifteen men whose work was systematized–some did the shooting, some the skinning, some the gathering of hides. I have talked with hunters who claim to have killed as many as one hundred buffalo in a day.

“‘Still hunting’ was the most popular method, for shooting on the run left the dead animals scattered over a wide area and increased the work of skinning. A sharpshooter would conceal himself in a thicket, behind a rock, or some other place he could not be seen by the herd, and begin operation. He would first kill the leaders of the herd, knowing that the dull-witted animals would seldom leave the spot where the leaders fell. Killing the leaders so bewildered the rest of the herd that they usually milled around in one spot until they were all killed. Aside from the fatigue of holding a gun for hours at a time, the hunter would experience no difficulty in continual slaughter.
Kills 1,114 Buffaloes in Six Weeks

“One Kansas still hunter killed 1, 114 buffalo in six weeks. Another hunter who built a blind around a mesquite bush near where a herd was passing shot them for three consecutive days. His partners did the skinning. The outfit followed this herd for many days, separating from it only when they ran into the teeth of a Kansas blizzard.

In Fort Elliot, the first and largest settlement in the Panhandle, I saw 300,000 hides at one time.

“Fresh hides were stretched on the ground by means of small pegs, then salted and dried. For years after the buffalo were gone cattle outfits moving through any part of the country had firewood in abundance from these pegs. After the hides were dried they were hauled into military forts and stacked there to await the coming of wagon trains which would carry them to railway centers for shipment. In Fort Elliot, the first and largest settlement in the Panhandle, I saw 300,000 hides at one time.

Wagon trains which hauled the hides constituted one of the most interesting and picturesque phases of frontier life. They brought supplies to the forts and to the big ranches. Low prices were made on hauling hides, since they were incidental freight; without them the wagon trains would have returned empty to railway centers. Lee & Reynolds owned the largest wagon train outfit in the West. It consisted of 1,000 head of mule, 1,500 head of oxen and a big string of wagons.

“Thirty wagons comprised a train. There were ten drivers, each operating three wagons and six head of oxen or mules. The oxen were used only in the summer time and were called “grass trains.”
Low Prices for Buffalo Hides

“Buffalo hides in 1870 brought as much as $3.50 each, but after it was discovered that they made inferior leather, the price dropped, each year, until they were bringing but seventy-five cents for a cow hide and fifty cents for a bull hide. Owing to improper curing of hides there was a great loss. It was estimated that every hide sent to market represented from three to five dead buffalo. Some hunters received as little as ten cents a piece for hides. Later, when the art of curing hides had passed the experimental stage, there was practically no losses of this kind.

“Some of the buffalo meat was sold to border settlers and some of it was shipped out of the country, but it was never handles in sufficient quantities to make this phase of buffalo hunting an industry. The meat that rotted in the wake of hunters would have fed a million people every year. No attempt was made to eat any part of the carcass but the tongue and the hump–the two choice morsels of the buffalo. The hump is on the top of the spine, just behind the neck. It had alternate layers of lean and fat, and was tender and delicious when broiled or fried. When cut out it was a strip about three feet long, ten or twelve inches wide, and four or five inches thick at its heaviest point. I never tasted anything better than a slice of hump meat about an inch thick, fired rare.
Wiped Out in Nine Years

“For nine terrible years a ceaseless slaughter was waged upon the southern buffalo herd. But gradually it became no longer possible to kill without reducing numbers; at last it was necessary to “hunt” for buffalo. The vast herd had dwindled to a few small bunches that fled into canyons. I had hoped that this remnant might be spared, but by 1878 it too disappeared, killed to the last animal. The four buffalo calves I captured that year were the only buffalo left in Texas.

“There were miles and miles of bleaching buffalo bones. Eventually they were gathered up, carted away and sold. They were made into phosphate fertilizer and into carbon used in the refining of sugar. The price generally paid for buffalo bones was $7 to $10 a ton at the markets.

“The … hunters moved northward and in Nebraska, Dakota, Wyoming and Montana. The fate that had befallen the southern herd descended upon the northern. At the of the year 1883, the buffalo were practically exterminated from the United States. The last carload of hides was shipped from Dickerson, Dakota in 1884.
-- posted unedited (Copyright 1931, by the Home Color Print Co.) 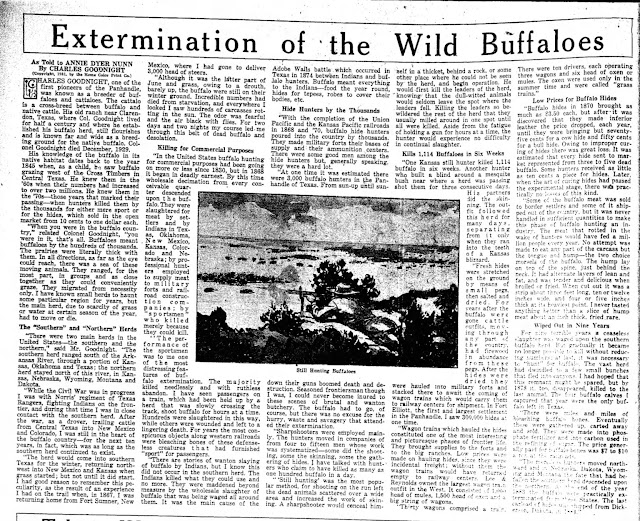