William Clarke Quantrill was born on July 31, 1837. As a young adult, he became a teacher. When the Civil War broke out in 1861, he joined the Confederacy. During his reign of terror, his band of guerrillas murdered, raped, and slaughtered the innocent. Besides the Lawerence Kansas Massacre, they burned and pillaged, and destroyed lives, all in the name of the Confederacy.
By May of 1865, Quantrill was mortally wounded during a clash with Union troops in Central Kentucky. It was one of the last engagements of the Civil War. He died of those wounds weeks later on June 6, 1865. He is most notorious for "The Lawrence Massacre."
For those who are unfamiliar with what became known as "The Lawrence Massacre", the attack took place on the morning of Friday, August 21, 1863. Quantrill's Raiders picked Lawrence, Kansas because the town was known for its support of abolition. It also had a reputation as a center for the Jayhawkers.
The term Jayhawkers came about in the 1850s in the Kansas Territory during the period known as Bleeding Kansas. The term was adopted by both free-state militia and vigilante groups known for attacking plantations in pro-slavery Missouri's western counties. Jayhawkers were also seen as guerrillas who fought against pro-slavery groups known at the time in Kansas Territory as "Border Ruffians" or "Bushwhackers."
Quantrill's Raiders were also known as Bushwhackers. When they entered Lawrence, Kansas, on that Friday, August 21, 1863, they knew they were about to attack a Unionist town. They killed over 165 men and boys -- and burned the town.
John Noland was an African slave born sometime in 1844.  He was a Freedman, a freed slave, who was, in fact, Confederate William Quantrill's chief scout. Nolan is known to have helped in scouting Lawrence, Kansas, before the massacre by Quantrill's men in 1863. John Nolan scouted Lawrence before Quantrill's men attacked that unsuspecting town. Since he was a freed black man, Noland was able to come and go as he pleased. He entered Lawrence without a problem.
On June 25, 1908, The Kansas City Globe reported the following:
NEGRO QUANTRELL DEAD
John Noland Followed Leader During War.
John Noland, the only negro member of Quantrell's band of guerrillas, died last night at the county farm in Kansas City, Mb. He wa3 taken there -two weeks ago. , Noland was devoted to Quantrell and followed the fortunes of the famous guerrilla chief as a personal servant. Several years ago an organization of the survivors of Quantrell's band was effected and an annual reunion is held each summer in or near Independence, Mo. John Noland was a unique and conspicuous figure in these gatherings.
As I said before, John Noland was William Quantrill's chief scout. He was very effective as a scout because he was in fact a freed black slave. And frankly, it's easy to understand why he was so effective since no one would have ever suspected a freed black man of being a part of Quantrill's Raiders.
As for his being proud of being a part of William Quantrill's band of guerrillas? He was obviously very proud of his being a member of Quantrill's Raiders. That's evident since Nolan was known to have attended the annual reunions of Quantrill's Raiders. In fact, it's said that John Noland tried to attend most of the reunions and was extremely popular among his fellow Quantrill veterans. 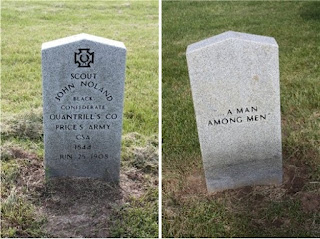