Give Christopher Columbus The Credit He Deserves 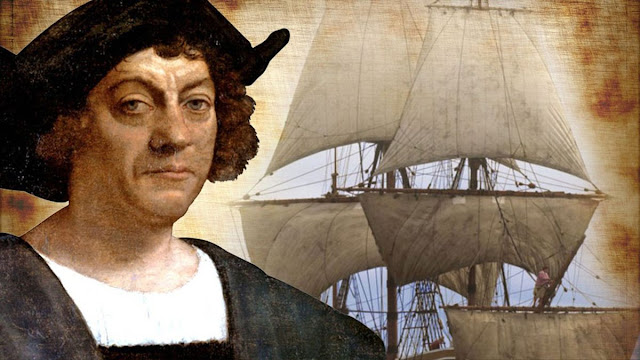 On October 15, 2021, vice president Kamala Harris gave a speech a day after Columbus Day, which some now recognize as "Indigenous Peoples' Day." During her speech, Harris said, "Since 1934, every October, the United States has recognized the voyage of the European explorers who first landed on the shores of the Americas. ... But that is not the whole story. That has never been the whole story. ... Those explorers ushered in a wave of devastation for tribal nations — perpetrating violence, stealing land, and spreading disease."
Not once in her speech did she mention the fact that Columbus was not looking for America, for peoples of another land, for land, or wanted to "spread disease." Not once did she say the truth is that Christopher Columbus did not travel west because he was attempting to discover a new land or was looking for slaves. It didn't matter to Harris that Africans had been selling their people into slavery to Muslims for over a thousand years by the time Columbus set sail. It didn't matter to her that tribes in the Americas had slaughtered each other for a few millennia before Columbus landed in the Bahamas, or that tribes waged genocidal war on each other longer than we know, or that tribes stole each others' lands, or that they made slaves of those who they did not butcher. She, as the Left does, conveniently neglected to talk about the horrors of war and human sacrifice that took place in the Americas for centuries before Europeans ever arrived.
To Harris and her ilk on the political Left, Christopher Columbus has become a symbol of mass slaughter that has been idolized by White Europeans for centuries. To her and the Left, Columbus set out to intentionally do harm to others. Of course, as with most of the uneducated on the political Left whose agenda is to divide and create animosity amongst Americans, it does not matter to Harris that she misrepresented the basic reason why Columbus arrived in the Americas in the first place.
Spain's arrival in the Caribbean and subsequently the Americas, and later in California, was all about looking for a shorter route to Asia. That's what their arrival was all about. They were trying to get to Asia. In fact, a route to the riches of Asia kept the Spanish looking for well over 200 years.
What was Christopher Columbus looking for when he reached the Caribbean? Asia. Some folks simply don't understand that Columbus was not looking for a new continent. The "known world" did not know the Western Hemisphere, the geographical term for the half of Earth, actually sat between Europe and Asia. Map makers and scholars did not know that landmass was there. Columbus was simply trying to find a shortcut to Asia so that Spain would be able to better cash in on the wealth that Asia held.

Did Christopher Columbus fail in his quest to find that route? Yes, because he never did find what he sought -- and what Spain needed. While he, like many explorers of that age were truly fascinated by the works of Marco Polo and believed the earth is round, it is a fact that Columbus stumbled into the Bahamas purely by accident. It's true. Christopher Columbus, the man who was the son of an Italian wool maker, a man who went to sea and later ended up studying navigation and mathematics in Portugal, found the Caribbean island that he named Hispaniola by accident.

The Spanish monarchy provided him with crews for three ships -- the Niña, the Pinta and the Santa Maria. On August 3, 1492, he set sail from Spain. On October 12th of that same year, his ships found land. But it was not the East Indies, which is the lands of South and Southeast Asia.

When Columbus made landfall, he really believed that he had reached India. In fact, that's the reason why he called the natives who he encountered "Indians." He believed he had found the land that he was looking for. In reality, it was not the land of spices and riches that he had hoped for. But that didn't stop him from believing that he found Asia. He really believed that he found Asia and no idea where he was or what he stumbled upon.

Columbus sailed from island to island for months in what we now know as the Caribbean, all the while looking for friendly trading ports that he knew were already established in Asia. What was he in search of? He searched for "pearls, precious stones, gold, silver, spices, and other objects and merchandise whatsoever" found in the East Indies to take back to his Spanish benefactors.

Disappointed, by January of 1493, he returned to Spain after leaving dozens of men behind in a small settlement on an island which they named Hispaniola. That island is present-day Haiti/Dominican Republic. He returned to Spain after failing to find riches or Asia. He would sail west again later in 1493, 1498, and in 1502. Again and again with a determination to find a direct ocean route west from Europe to Asia. He died never knowing that he had discovered two continents which were to be called the "New World." He died believing he found Asia.

For some reason, people have this idea that Columbus thought he found a New World and that was the prize. That wasn't the case. Asia was the prize because of the riches that Asia held. In the 1400s, reaching Asia from Europe was considered nearly impossible. The land route was not only long, but it was also seen as filled with all sorts of danger including all sorts of hostile bands and rogue armies.

Portugal was an empire at sea and had solved the land route problem by sailing south along the West African coast and around the Cape of Good Hope. Portuguese conquistadors colonized the African coast and would later meet African Chiefs wanting to sell their own people into slavery. African Chiefs sold their people to Muslims as slaves for centuries before meeting Europeans. Muslim armies having black and white slaves was not unknown to the Portuguese and the Spanish. After centuries of war with the Muslim Moors starting in the 8th century, the Moors were finally expelled from the Iberian peninsula in January of 1492. That was when the Catholic Monarchs defeated the last Moor stronghold of the Kingdom of Granada.

The war with the Moors was costly to all, but especially for Spain in its last ten years in the war for Granada. Because of that, Spain wanted its explorers to find riches to rebuild their coffers. Portugal was seen as a power from the early 1400's and had already established a sea route around the Horn of Africa by the late 1400s. To say the Portuguese explorers didn't get around would be a real understatement since it's believed that a Portuguese explorer arrived in Newfoundland in North America in 1472. Yes, twenty years before Columbus arrived in the Bahamas.

When Columbus presented his plan of sailing west instead of south and around Africa to reach Asia, both Portugal and England were not interested in bankrolling his expedition. That wasn't the case with Spanish monarchs Ferdinand of Aragon and Isabella of Castile who were sympathetic to his idea. To them, Columbus' plan made sense considering the world was believed to be smaller at the time. To the known world, if the earth is indeed round, then Asia lay to the west.

Why not sail west across the Atlantic instead of heading south and around Africa to go east to get to Asia? His logic was sound, even if his math wasn't. Remember, he incorrectly argued that the circumference of the Earth was much smaller than it is in reality. He believed that a journey to Asia would be possible by going west. All he needed to do was prove it. Needless to say, that didn't happen even though Spain backed his efforts for four attempts. And no, Spanish monarchs Ferdinand and Isabella did not get any of the riches that were promised them by Columbus.

After Columbus failed to find his new trade route to Asia in 1492, and instead landed in the Caribbean, there was all of a sudden a whole new set of continents that were completely unknown to every mapmaker in the known world.
So frankly, I say let's give Christopher Columbus the credit that he deserves for changing the world. Whether Columbus knew it or not, he did in fact make every map of the known world completely obsolete, completely wrong, in 1492. While he didn't know that he didn't get to Asia, his accidental find of the Western Hemisphere changed the way every power in Europe and Asia viewed the world.
Think that's some small feat? Can any of you imagine a map without the Western Hemisphere on it? Imagine all of the mapmakers throughout the "known world" of Europe, Asia, and Africa needing a name for lands that no one ever knew about. No one even knew what it looked like, nevertheless what to name it. Remember, what would later become North and South America was completely uncharted. No one knew how big it was, if it was simply a small chain of islands near Asia, if it was a part of Asia, or if it were islands near a landmass as big as Europe and Asia and Africa, or all combined. No one knew.
All they knew at the time was that an Italian explorer commissioned by Spain to find a shortcut to Asia accidentally found lands where they should not have been. They were lands that no one thought existed. And by finding them, even though by accident, Christopher Columbus changed the world.
Tom Correa
Posted by Tom Correa at 5:00 PM