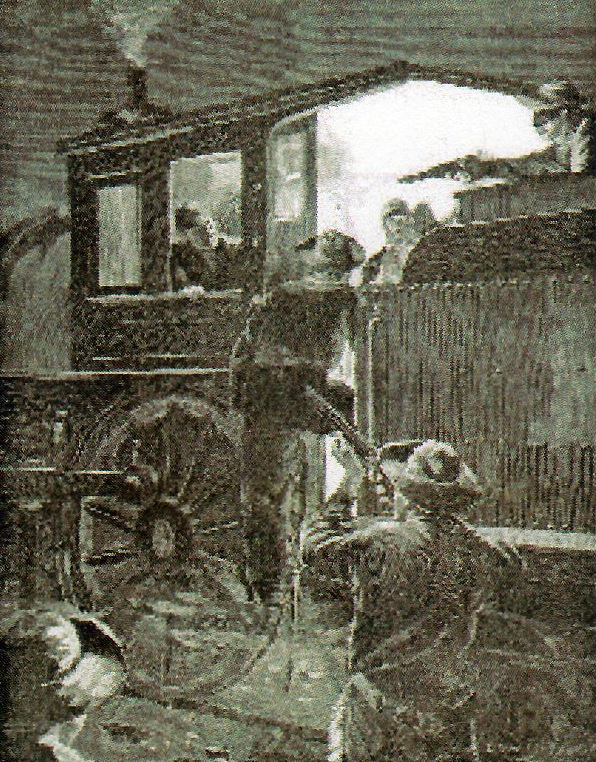 During the late-night of September 18, 1877, Union Pacific express train No. 4 was made to stop at a remote water station in what is today Big Springs, Nebraska. It was carrying passengers and cargo from San Francisco. Among its cargo was a shipment of gold pieces straight out of the San Francisco Mint.
In the darkness, an outlaw gang which was known as the "Black Hills Bandits" boarded the train at 10:48 pm. They had captured the station master and smashed the telegraph. The leader of the gang was none other than outlaw Sam Bass. He along with members Jim Berry, Joel Collins, Jack Davis, Bill Heffridge, and Tom Nixon reportedly stole $60,000 in freshly minted $20 gold pieces.
In reality, the gang had no idea that such a haul was to be had on that train. In fact, it's said that the outlaws lifted the cash and valuables off of the passengers and found $450 in a small "way safe" -- and were about to leave the scene when they stumbled on the $60,000 in gold.
It's true, they were frustrated after pistol-whipping an attendant and were ready to leave. The attendant wasn't very cooperative when it came to helping to open the main safe. The attendant tried to thwart the robbery by telling the outlaws that the safe was on a time-lock when in fact it wasn't.

Then it happened. As a gang member was walking toward the door, he spotted three wooden boxes stacked by the main safe. Something must have told him to check those boxes because when he did -- he opened one to discover neatly packed $20 gold pieces. Soon, the gang realized they had found a fortune in $20 gold pieces shipped out from the San Francisco Mint.
While $60,000 might not sound like a lot of money today, $60,000 in 1877 is the equivalent of purchasing power to about $1,563,240.00 in 2021. So yes, between the $60,000 in newly minted $20 gold pieces, the money from the way safe, and about $1,200 and four gold watches talked from the passengers, that was quite a haul. How much so? Well, it is still considered the largest single robbery in the history of the Union Pacific Railroad. It is certainly the greatest robbery of a Union Pacific train in its history.
Legend says the outlaws fled and later divided their loot in six ways. Supposedly, they split their stolen bounty evenly "under an old cottonwood tree near the town." Of course, thanks to press coverage at the time, newspaper stories sensationalized the heist and made Sam Bass and his gang instantly famous. Part of the sensationalism came from the fact that the robbery went off without a single fatality. And while that was well and fine on that Tuesday night, it wasn't the way things played out for the gang.
Within a week of the robbery, traveling in pairs, the first two to run into trouble was gang member Joel Collins and Bill Heffridge. It's said that they were shot dead by a Sheriff's posse which was supposedly also made up of a small group of Army Soldiers.
Jim Berry and Tom Nixon headed out together. They were headed to Missouri when Berry decided to deposit part of his share and trade the rest for cash. When asked about the enormous amount of money, Berry supposedly gave folks a story about selling a mine in the Black Hills before returning home. His story didn't wash and a local Sheriff checked with the bank about what sort of deposit was made.
When the Sheriff verified that it was newly minted $20 gold pieces, he formed a posse to bring Berry in. After an exchange of gunfire, Berry lay wounded and told the authorities that Tom Nixon was there but headed back to Canada. It is said that when Jim Berry died, lawmen found almost $3,000 in cash on him. As such is an outlaw's fate, Berry died a short distance from his home in Missouri.
Allan Pinkerton's Detectives were called in to try to find the three remaining gang members. Using wanted posters advertising a $1,000 Reward for their capture, the Pinkertons sought Sam Bass, Jack Davis, and Tom Nixon. While it is believed that Nixon did in fact return to his native Canada and was never heard of again, Sam Bass and Jack Davis fled South to Texas.
The Union Pacific Big Springs Robbery was a very big deal. It propelled a small gang of unknowns into newspapers from coast to coast. Of course, it was the event that gave Sam Bass fame. Before that robbery, Sam Bass was a drifter, a cheap crook, and a petty criminal. He turned to law-breaking after working as a teamster on a freight line. It's said that he tried his hand at being a farmer, a hired hand on a trail drive, a bartender, and even a miner.
When he was flush, as was the case after the Union Pacific Big Springs Robbery, he was a gambler known for betting on the ponies and playing faro. It's said that a mere four months after the Big Springs robbery, Bass was looking for his next big score. And while he formed another gang, and they too robbed trains, there was never another fluke like that that happened in Big Springs on a dark Tuesday night when by accident his gang stumbled on a fortune.
Tom Correa
Posted by Tom Correa at 12:26 AM