Melissa and the Freedom of Speech

This is not my normal sort of Blog.  This is different because it is in reply to a letter that I received from a great gal by the name of Melissa in Ireland.

She seems like a wonderful woman.  She wrote saying some pretty nice things about my use of our right to Free Speech.


Our right of Free Speech is one of our most treasured rights.

It is one of the things that separate us from the people who live under Communist controlled Cuba or Venezuela or China, or dictatorships like that of Iran and Syria.  It is one of our tools against an oppressive regime.

It is ours to use freely, and hopefully wisely.  Yes, we cannot use our right of Free Speech to yell "Fire" in a crowded theater.  Like all of our rights, it is ours if we use it appropriately.

Our right to Free Speech is one of our weapons against any attempt to impose oppression and tyranny by any elected official.  We use it for many reasons, but mostly to remind politicians that they work for us.

Yes, be it Obama or a member of Congress, or the local district supervisors, they work for us.  Yes, we are their bosses.  It's not the other way around. 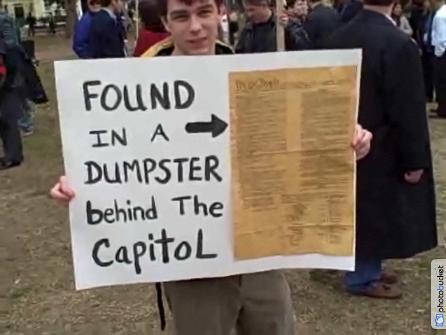 When Obama was first elected, he could do no wrong in the eyes of the media around the world.  Of course our National Media, who is as biased as the day is long, covered for Obama every time he needed them to down play one of his gaffs.

The liberals in America voted into office a man with no experience. None, zero, zip!

He never ran a business, or was ever employed to produce or work for a living, he had no resume - except being Black.

No one likes being called a "Racist," and it became apparent that if anyone had anything negative to say about what Obama was doing - yes, they'd be labeled "Racist."


People are called "Racist" if they criticize Obama, and worse, those of us who voted for the more experienced John McCain were called  "Bigots!"

Fact is Obama has done more is his short time in Office to separate American from American, and Blacks from Whites, than any other President.  Racial relations before Obama was elected was actually pretty good.  He has managed to undo all the good that was accomplished over the last 60 years.  I believe that he is the worse thing to happen to Blacks in America since the Jim Crow laws of the 1860s.

A friend of mine put it this way recently, "say something publicly against Oblahblah ... and you would think I was advocating human sacrifice, the evil stares I get, and the hateful things people say ..." 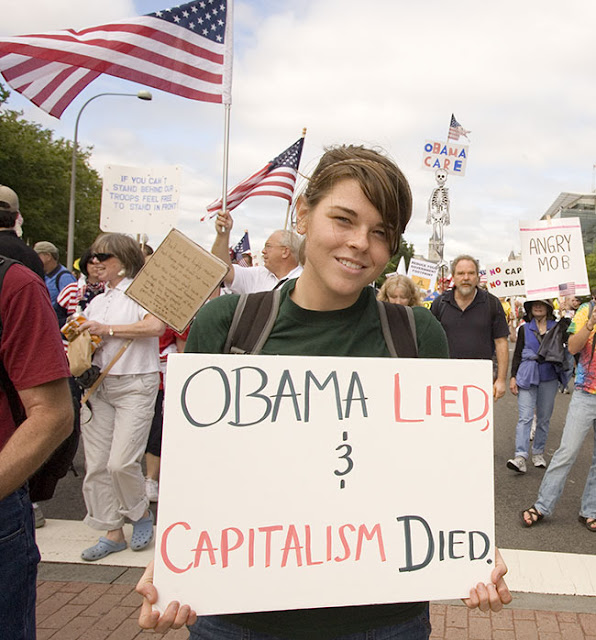 Yes, there are those who have set up alters to Obama.  It's a shame they haven't got the word yet that he can't speak without his beloved Teleprompters, and his behind the curtain writing staff.

And yes, it's not just happening here.  Fact is that it's also happening in places like the UK.

My wife has family in the UK, and I have friends who visit the UK pretty often.  They say that people there idolize Obama.


But why? Why would they? What's Obama done for them, other than offend Great Britain?

I guess the answer is fairly simple.  Fact is, its easy to consider Obama great when he's not your incompetent leader.  It's easy to drool over Obama's speeches when none of it has any bearing on your life or your nation.  It's easy to fawn over his so-called eloquence when you don't have to put up with his outright lies and lawyer speak.

It must be wonderful to see America with a President who is spending Americans into debt the way he is?  And yes, he has the nerve to say that it isn't his fault.

It must be exhilarating to have some inept joke in the White House after 8 years of Liberal hatred for George W. Bush?  Was George charismatic?  Nope he wasn't.  Was he competent?  You can bet your ass he was!

I can't help but wonder why the English left loves him? By God, I wish he ran for Prime Minister instead of President.  Maybe then they'd understand what sort of idiot he is?


What can you say when his only real working experience in government is Chicago Politics of backroom deals and twisting arms?

Someone once said, "Protocol is diplomacy." So what about some clown who doesn't understand basic protocol when meeting people, be it Saudi King or Japanese Emperor?

What happens if he doesn't understand America enough to realize that we Americans don't bow to anyone? 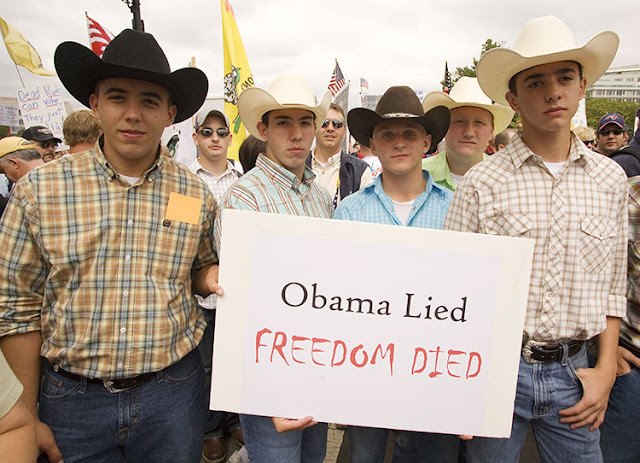 Americans stopped bowing to royalty over 200 years ago, when America got out from under the rule of the British monarchy.  But then again, knowledge like that is not always taught in liberal households - is it?

Anyway, who needs someone who understands protocol when instead you have a Black man who has a bunch of ultra-liberal extremely wealthy Democrat supporters who've all prayed to one day have a Black President, ignorant or not?

Now I'm sure someone out there just screamed, "See, he's a Racist!"

But friends, I'm not.  In fact, there are many Black Americans who I would love to see become President instead of Obama.  In fact, here's my list of much more qualified people:


If Americans are looking specifically for a Black President, then I really believe that any one of these great individuals are much more qualified to be President of the United States than Obama is.

In the meanwhile, let's hope America can find someone competent - of any color!


But wait! Melissa, my buddy, look at what's happening these days.  Even the die hard liberals are having second thoughts about Obama and his so-called "Change."

Yes, they too are using our treasured right of Free Speech to take him on.  They too are tired of Barrack Hussein Obama's idea of Change.


It's not only us Conservative who are tired of his spending our hard earned dollars on Socialism, or how about him allowing his Justice Department to run thousands of assault weapons into Mexico to arm those who know nothing but how to kill.

Thanks to the Obama White House, the Mexican Drug Cartels now have top of the line assault weapons to kill the police and the Mexican troops, and yes - to slaughter whole families if they want to. 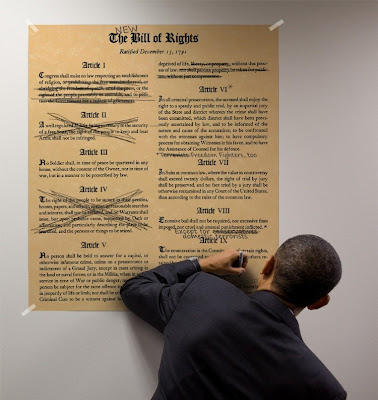 Have you noticed how silent Obama is pertaining to his Attorney General breaking the law and arming those Mexican Cartels?   Remember how vocal he was in condemning the Arizona Governor for her attempt to stop the killings of American citizens along the border?

It seems dead Americans make no difference to Barrack Hussein Obama.  Maybe that's why he's creating a No Man's Land along the U.S.-Mexico border.  It appears that American lives mean nothing to him.

The killings of Americans are happening more and more along our border, and the Obama White House doesn't do a thing to help stop it.  In fact, he is openly fighting Arizona who is trying to keep their citizens safe.  And now even the liberals are asking why?

Yes indeed, even Liberals are now using our Freedom of Speech to express what they dislike about Obama.  I believe that many are going through withdrawals and buyer's remorse.  The left in America is now having to admit it  - Black or not, he's proven himself a horrible President.

And yes, some of them are openly admitting that they should have asked Obama tougher questions back in 2007 and 2008 when he was running for office.

One such liberal is far-left professor Drew Westen, wrote this in a piece for the New York Times:

“Those of us who were bewitched by his eloquence on the campaign trail chose to ignore some disquieting aspects of his biography: that he had accomplished very little before he ran for president, having never run a business or a state; that he had a singularly unremarkable career as a law professor, publishing nothing in 12 years at the University of Chicago other than an autobiography; and that, before joining the United States Senate, he had voted ‘present’ (instead of ‘yea’ or ‘nay’) 130 times, sometimes dodging difficult issues.”

Please remember, that this is from a liberal professor who was previously strong supporter of Obama writing this in the ultra-liberal New York Times.

A writer who wrote about Drew Weston's piece, put it this way:

"Not only is he now questioning the 'disquieting aspects' of the President’s biography, but he is also calling into question the accepted myth of Obama’s 'brilliance.'  Maybe now more on the left and more in the liberal mainstream media will ask by what criterion did they elevate Obama to the level of  'brilliant?'  As Westen points out, beyond Obama’s 'singularly unremarkable career as a law professor' - or anything for that matter - is the very question of his actual competence.  Beyond the mandates of political correctness, how is a man who refuses to release the results of his SAT scores, his I.Q. test, or his transcripts from Occidental college deemed 'brilliant?'"


Where indeed?  Where did all this "brilliant" nonsense start?  Most likely the Media, or the Democrat Party to pump up his image to the American people.

But that's OK, because he hasn't been able to live up to the hype and now even liberals are questioning Obama's credibility.

No Melissa, our freedom of speech is not owned by the Left.  It is not the sole property of those rampaging anti-War protesters in the streets of London or Washington DC and San Francisco who smash windows or set police cars afire.

Our freedom of speech does not belong solely to the Muslim crazies who call for beheading Dutch cartoonists, or for American to observe Sharia Law that insane religious doctrine follows by barbarians and fools.

It is not reserved for the fashionable wealthy elite, or the Hollywood leftist who think they're smart because they've learned how to regurgitate lines some writer puts in their mouths. 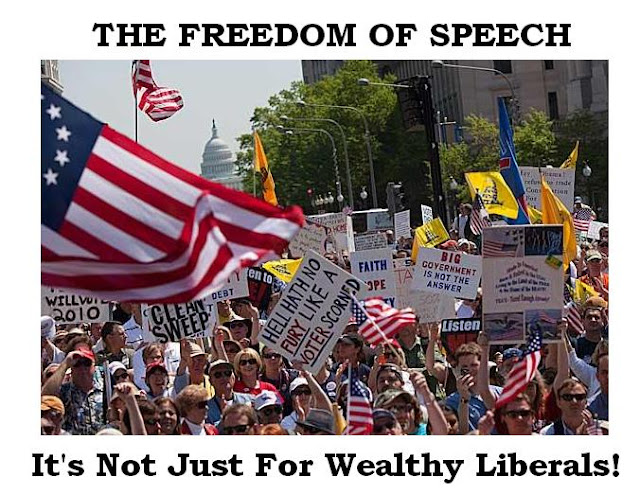 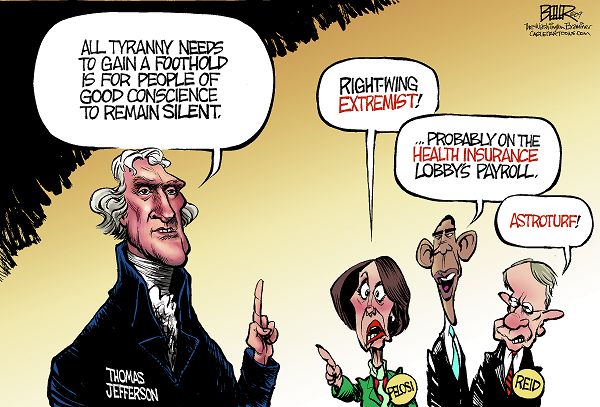 So speak up Melissa!  Speak your own mind!

Tell the world what you think!  After all, your thoughts, your feelings, your adventures, your concerns, they're all as important as mine -  and anyone else in the world.

If Obama supporters give you a dirty look because you don't see him the same way they do, give them a look right back.


And if they persist, then maybe you should ask them to put out their candles and remove Obama from the pedestal that they've placed him on.   Then, and maybe only then, they may be able to take an honest and non-biased look at Obama's record while in Office.

You never know, maybe they'll be honest with themselves and see why even Obama's strongest liberal supporters are now seeing the light.

Remember, you are a good woman.  And yes, your thoughts and opinions are as important as theirs!

May God Bless and keep you well.