Keep Environmental Agenda Out Of Our Dietary Guidelines -- We Love Beef! 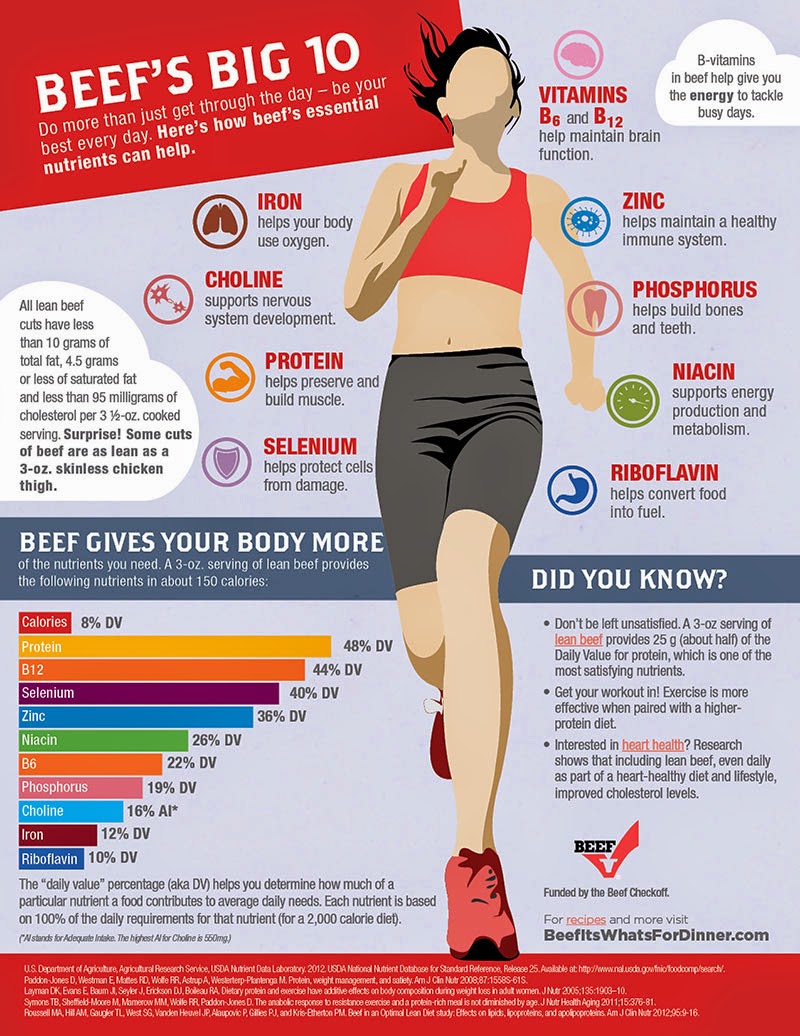 If Environmentalists are successful, Americans will not be aware of the information above regarding health benefits of beef.

Thankfully we have Republican lawmakers on Capitol Hill who are pushing back on proposed USDA dietary guidelines they say wrongly downplay the benefits of lean red meat to advance an Environmental agenda.

Rather than promoting healthy choices based on “sound nutritional science,” new dietary guidelines have more to do with Liberal politics than good health.

They said the report exceeded its scope in developing the recommendations.

“It is extremely difficult to reverse or change public policy, once enacted, without causing consumer confusion,” the letter states.

“Inaccurate and conflicting dietary guidance messages are detrimental to consumer understanding of nutrition and the ability to build healthy diets.”

The USDA and HHS will use the DGA advisory committee’s report to write the final version of the 2015 dietary guidelines, expected by the end of the year.

Arguments over the guidelines have been growing on Capitol Hill, with the cattle and agriculture industries arguing that an Environmental agenda has no place in a government blueprint for healthier living.

The advisory committee has discussed sustainability as a good dietary goal, saying in its draft recommendations that there is “compatibility and overlap” between what is good for health and what is good for the environment.

No kidding. Liberal political causes such as the environment are now intruding into how food is grown, cattle are raise, and what we are being told we should and should not eat.

It said that a diet higher in nuts and greens and lower in animal-based foods is “more health promoting and is associated with lesser environmental impact than is the current average U.S. diet.”

The advisory panel, though, has debated whether lean meats should be included at all.

The lawmakers behind the letter argue that the guidelines play a critical role for federal nutritional policy development and is the scientific basis for education and outreach.

Therefore, they say, it is essential that they “be based on sound nutrition science and not stray into other areas outside of this specific discipline.”

“I am asking the same question thousands of school kids in North Dakota and across America will be asking: ‘Where’s the Beef? Sacrificing sound science and denying the nutritional benefits of lean red meat to satisfy an extreme environmental agenda is woefully misguided,” Rep. Kevin Cramer, R-N.D., said in a written statement.

The March 31 letter states: “We are disappointed with reports from observers that the approach of the 2015 DGAC suggests studies were either selected or excluded to support pre-determined conclusions.”

How Can Environmental Groups Fund So Many Democrats With Millions of $$$$?
Not surprising, more than 100 Environmental groups which donate heavily to Democrats, groups like Natural Resources Defense Council  and the Sierra Club, have come out in support of the recommendations.

There have been ads purchased in daily newspapers that feature an open letter urging Burwell and Vilsack to adopt the changes.

“What we are seeing with the Dietary Guidelines is a rare consensus between the environmental, public health and nutrition communities,” Rhea Suh, said president of the ultra-liberal Natural Resources Defense Council in a written statement.

Of course the question should be, Why does there need to be a "consensus between the environmental, public health and nutrition communities" pertaining to our dietary guidelines?

What do Environmental Groups and their agenda have to do with our dietary guidelines in the first place?

Friends, this is the bigger issue here, there should not be a consensus because the Environmentalists should not be part of the discussion when it comes to our dietary concerns.

Their input is irrelevant.

The problem is that Environmentalists own every level of the Obama administration.

The State Department has declared that Climate Change which we will feel the impact of in 1000 years is more important than the threat of terror.

The Department of Education, the USDA, the EPA, Homeland Security, they are all on-board to support Environmental causes.

In a report last year, July 2014, the Washington Examiner asked the question, "Are Natural Resources Defense Council, Environmental Defense Fund and Sierra Club three of the richest bullies on the block?"

The New York Times on posted a revealing story last year that described in detail how two lawyers and a climate-scientist-turned-lobbyist at the Natural Resources Defense Council crafted a 110-page proposal that was Obama's "blueprint."

The New York Times described it as "a remarkable victory" for NRDC, which "has a reach that extends from the big donors of Wall Street to the elite of Hollywood (Leonardo DiCaprio and Robert Redford are on its board) to the far corners of the Environmental Protection Agency ..."

The New York City-based NRDC is just one of many huge Big Green environmental groups, yet just in the past 15 years, it has received more than 4,000 grants from wealthy foundations worth more than $289 million, for an average of $19 million annually, according to Foundation Search.

That compares to the $3 million spent by the Koch Industries PAC in 2012, its biggest year since 1990, according to OpenSecrets.org.

According to the group's 2012 IRS 990 tax return, it received more than $92 million in total contributions that year. The group's net assets are worth $183 million.

Even a cursory look at the NRDC's lengthy list of grants from philanthropies — many originated by immensely wealthy men like John D. Rockefeller — reveals a laundry list of such groups.

The Rockefeller Foundation has given NRDC 18 grants since 2003 worth a total of $3.1 million.

The Rockefeller Brothers Fund has made 12 such grants since 1999, worth a total $1.4 million.

The Rockefeller Philanthropy Advisors has given NRDC a dozen grants since 2003, worth a total of $615,500.

By comparison, the Ford Foundation is a piker, having given NRDC only three grants since 2003 worth a measly $224,331.

Not to worry, though, because NRDC has lots of other wealthy charitable patrons, including the Annenberg Foundation, which since 2003 has given the group seven grants worth $1.3 million.

And if things ever get really tight for NRDC, there's always the Tides Foundation — the original "dark money" treasure chest for liberal political activists — which since 1999 has given 38 grants worth $2.7 million.

The NRDC shaped Obama's anti-carbon program -- which will cost millions of jobs and cripple U.S. economic growth -- but it's far from the wealthiest, or most powerful Big Green group.

The Environmental Defense Fund has gotten 1,491 grants worth more than $294 million over the same period.

In other words, just these three Big Green groups have received $996 million since 1999 — call it $1 billion for short — from wealthy foundations.

Compare that to the mere $17.8 million raised by the Koch Industries PAC in its entire history, funds that were solicited out of concern for a wide variety of issues, not merely those of the environment.

The question the Washington Examiner asked last year is still relevant, so "now who are the rich bullies on the block?"

Because Environmentalist Groups own the Democrat Party, especially those Democrats in Washington DC, they can steer the agenda and downplay sound scientific data to deny Americans the nutritional benefits of lean red meat.

This is all part of their agenda to rid America of beef.

Why? Well, Environmentalist Groups see the cattle industry as the enemy because they believe cattle hurt the land and environment.

As crazy as that sounds, they are determined and financially able to get their way in depriving Americans of beef and putting cattle producers out of business.