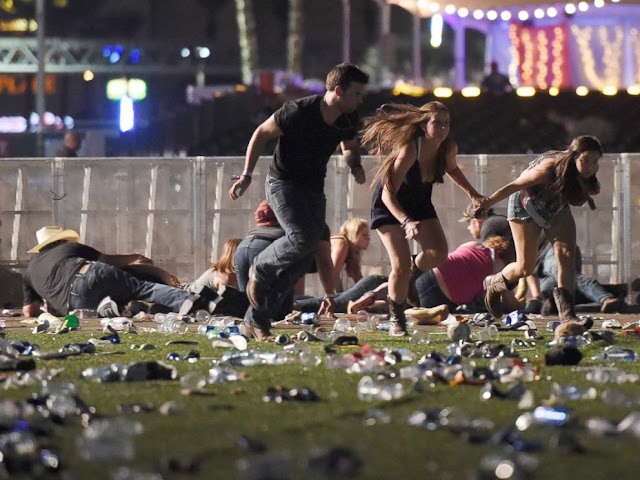 As we all know, on Sunday, October 1st, concert-goers in Las Vegas, Nevada, came under attack by a ruthless killer intent on slaughtering as many innocent people as possible.  The killer opened fire from a 32nd floor hotel room at the Mandalay Bay Resort in Casino. His target was a crowd of 22,000 concert-goers 400 yards below attending the Route 91 Harvest festival, a country music festival.

His rampage lasted a little over 15 minutes. Sunday's mass shooting left 59 people dead and 527 injured or wounded. It panicked concert-goers who tried to take cover while being completely unaware at first of where the gunfire was coming from. No one suspected a room on the 32nd floor of a nearby hotel where the killer could just rain down fire.

As for motive, the big question as to why Paddock did it? No one knows. And frankly, I don't think anyone ever will. No, it's not like the Orlando, Florida, mass shooting where we know that it was a Muslim terrorist attack targeting gays.

In Orlando, Florida, on June 12th, 2016, 49 people were killed and 58 were wounded. Muslim terrorist Omar Mateen walked into the Pulse nightclub as the club was hosting a "Latin Night." before he was killed by Orlando police.  The Pulse is a gay nightclub in Orlando, and many of the victims were Latino.


During the shooting, Omar Mateen called the Orlando Police to swear allegiance to the ISIS. It is the  deadliest act of Muslim terror in the United States since September 11th, 2001.

The 2007 mass shooting on Virginia Tech University's campus remains the deadliest school shooting in United States history. Yes, considered worse because of the numbers of innocent people killed than what took on December 14th, 2012, at Sandy Hook Elementary School where 26 people were killed and 2 were wounded.

Minutes before he went to the school, the 20-year-old Adam Lanza murdered his mother at their home using her rifle. Adam Lanza committed suicide when the police arrived at the school.

In Killeen, Texas, on October 16th, 1991, George Hennard drove his pickup truck through the glass front window of a Luby's restaurant. He then began shooting patrons and staff inside.  All toll, 23 people were killed and 27 people were wounded before he finally shot himself dead.

On July 18th, 1984, James Huberty shot 40 people at a McDonald's restaurant in the San Ysidro district of San Diego, California. Among those that the 41 year old Huberty murdered was an 8 month old little boy and a 9 year old girl. Among those he wounded was a 4 month old baby girl.

Before he went out to commit mass murder, according to the New York Daily News, he told his wife, "I'm going hunting. Hunting for humans." His shooting spree was ended when Huberty was shot and killed by a San Diego SWAT Team sniper positioned on a nearby roof. He killed 21 adults and children while wounding 19 others.

The shooting lasted a little more than 90 minutes. It ended when police officers were finally able to storm the Tower and shoot the killer dead.

Besides shooting everyone they could inside the building, the couple also planted three homemade pipe bombs in the building. Happily, they failed to detonate. All toll, they killed 14 innocent people while wounding another 22 wounded before the couple fled the scene and were killed by police.

On August 20th, 1986, a part-time mail carrier by the name of Patrick Sherrill shot 20 fellow postal workers at the US Post Office in Edmond, Oklahoma. The attack ended when Sherrill fatally shot himself in the head. This was the first of a number of shooting involving postal workers between 1986 and 1999. This killing of 14 people and wounding 6 others, inspired the expression "going postal."

It all took place with Nidal Hasan, a U.S. Army major and psychiatrist became a Muslim terrorist, and decided to wage "jihad" on his fellow American soldiers. It is the deadliest mass shooting to take place on a U.S. military base. As for Nidal Hasan, he was sentenced to death in 2013 and remains in prison to this day.

Five years later, in 2014, Fort Hood was the site of another shooting spree which left three people dead and 14 wounded.

Below is an article that you may find interesting. I did.

He came along with a shotgun on his shoulder while a group of children were playing in front of the school. Without warning or provocation, he raised the gun to his shoulder, took deliberate aim, and fired into the crowd of boys.

Although it sounds sadly modern, the account was published in the New York Times more than a century ago.

"None of the children were killed, but several were well filled with lead," the report said.

More than a century earlier, on July 26, 1764, a teacher and 10 students were shot dead by four Lenape American Indians in Greencastle, Pennsylvania, in what is considered the earliest known U.S. mass school shooting.

Indeed, killing or trying to kill a mass of people is not a modern phenomenon. For as long as there has been history, there have been gruesome mass murders.

"The terms amok, a Malayan word, and berserk, a Norse word, have been used to describe individuals going on killing sprees. Both terms have been around for centuries, which reflects the fact that mass murder is neither a modern nor a uniquely American phenomenon," Grant Duwe, director of research at the Minnesota Department of Corrections, told Discovery News.

Defined as bloody events that occur within a 24-hour period and that involve a minimum of four victims, mass murders have occurred all over the world, in different times, societies and cultures.

Some of the earliest recorded cases include the 1893 killing with guns and swords of 11 people (including an infant) in Osaka, Japan, the 1914 shooting of 7 people in the Italian village of Camerata Cornello, not to mention the case of German spree killer Ernst August Wagner.

In 1913, he stabbed to death his wife and four children in Degerloch, near Stuttgart, then drove to Mühlhausen an der Enz where he opened fire on 20 people, killing at least nine, leaving two animals dead and several buildings burned to the ground.

In 1938 almost half of the population of the rural village of Kaio, near Tsuyama city in Japan, was murdered as 21-year-old Mutsuo Toi killed 30 people with a shotgun, sword and axe, injured three others and then shot himself to death.

Between 1954 and 1957, William Unek murdered a total of 57 people in two separate spree killings in the Belgian Congo.

He first killed 21 people with an axe, then shot dead ten men, eight women and eight children, slaughtered six more men with the axe, burned two women and a child, and strangled a 15-year-old girl.

More recently in the bloody timeline of shooting sprees, some of the most dramatic incidents include the 1987 Hungerford massacre in England, where gun enthusiast Michael Ryan shot 16 people dead and wounded another 15 before committing suicide, the 1996 Port Arthur massacre in Australia, where 28 year old Martin Bryant killed 35 people and wounded 21 before being caught by police, and the 1996 school shooting in the Scottish town of Dunblane.

There, failed shopkeeper Thomas Hamilton opened fire at a primary school, killing 16 children and a teacher before turning his gun on his mouth.

"I could have been one of those children," tennis player Andy Murray wrote in his autobiography, "Hitting Back."

Britain's highest ranked player, Murray was eight when Hamilton burst into the school and began shooting. He and his 10-year-old brother Jamie escaped the fire by hiding under a desk.

In the United States, two mass murder waves characterized the 20th century. One appeared in the 1920s and 30s and another in the mid-1960s, following a tranquil period in the 1940s and 50s.

The two waves, however, were qualitatively different, according to Duwe.

"The first mass murder wave in the 1920s and 30s was comprised mainly of familicides and felony-related massacres, which, then as now, are less likely to garner extensive media coverage," Duwe said.

On the contrary, the second mass murder wave from the mid-1960s through the mid-1990s consisted of a greater number of mass public shootings, similar to the recent Aurora movie theater shooting and Newtown school shooting.

These incidents "have always captured a great deal of interest and concern," Duwe said.

Marked by the 1966 Texas Tower shootings where student Charles Whitman climbed a 27-story tower on the University of Texas campus shooting dead 14 people and wounding 31 others, the mid-1960s do not actually represent the beginning of an unprecedented mass murder wave in the United States.

"Since 1900, the highest mass murder rate was in 1929. Mass public shootings are one of several types of mass murder and generally account for roughly 10-15 percent of all mass killings in the U.S.," Duwe said.

"This year, however, the U.S. has had at least seven mass public shootings, which is the highest number since 1999," Duwe said.

Rossella Lorenzi is the archaeology correspondent for Discovery News. She lives in Florence, Italy, and she says she divides her time among an 18th-century Florentine house, virtual archaeological digs, and travels to report on new historical discoveries. She writes for Discovery News, Fox News, CBS News, Yahoo, Scientific American, HuffPost, Mashable, LiveScience, and Archaeology Magazine.

Her article points to the fact that mass shootings happen all over the world. The perpetrators are of every race and color. Contrary to what some on the Left are now saying after the Las Vegas Massacre, these acts are not committed only by White men. Mass shootings are not just an American problem, contrary to what some in the Media are now saying.

As for what made Paddock do it? This tragedy has no rhyme or reason to it. And frankly, people can guess and wonder and speculate until the cows come home, but I don't think we'll ever really understand what drove him to do it. We will never really understand the premeditation, the deliberate act of planning such an attack, and the big question as to why people like Paddock do what they do when it's pure evil.

Just as no one knows why some folks are so consumed with hate for President Trump, Republicans, and Conservatives, that such a person will shoot up a baseball game between Congressmen, I believe that no one will ever truly understand how someone is so consumed with evil that they would want to rain gunfire on innocent country music concert-goers. And while some in the mainstream media are trying to say that mass shootings only take place in the United States, please don't believe that. That's just a lie.