Why Do So Many Democrats Hate So Insanely? 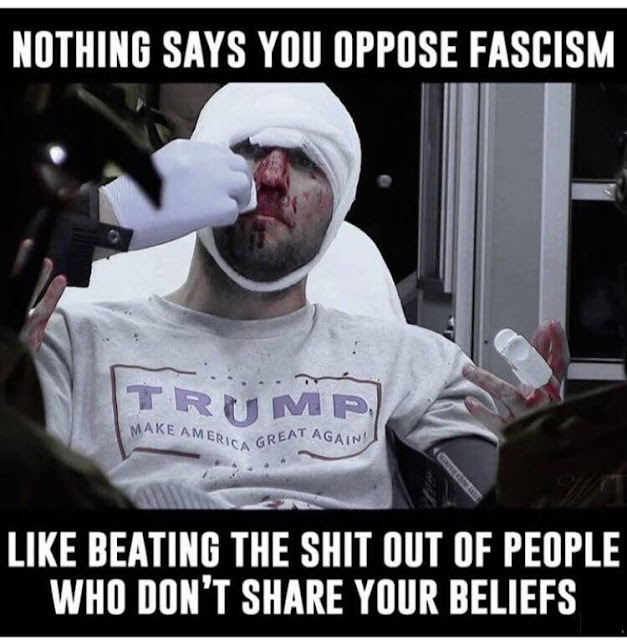 A few of you have written to ask the question, "Why do so many Democrats hate us so insanely?" By "us", one reader wrote, "hate Americans who just have a different outlook on life, like different things than they do, those of use who believe babies shouldn't be killed and sold for parts, or are Christian, or are Conservative, or are Republicans, or who are Trump voters."

A long time ago, I wrote a blog stating that I'm no different than you my readers in that I'm not some "Political Scientist" who has been educated in all of the theories as to why the Democrat Party acts the way it does. Like you, I can only judge them by their actions. Yes, the same way you do.

Of course, by their actions, I'm talking about what they say versus what they do? If they are indeed working for us versus if they are actually working for their political donors? If they are obstructionist when it comes to stopping things that benefit we the American people? Or if they don't see the burden that they place on Americans when they create needless regulation and increase our taxes?

While I see RINOs, Republicans In Name Only, like John McCain and Lindsay Graham, who are just as bad as any Democrat out there.  I see Democrat politicians as people who are more concerned about lining the pockets of their wealthy donors. I see Democrats as the party of higher taxes, more regulations, just obstructionists who are not for American manufacturing, better paying jobs, or prosperity in America.

Looking at the actions of some Democrats, and all of the hate that they constantly direct toward President Trump, I can't help but wonder if those Trump Haters are way too emotionally tied to hating a President Trump because he is White and a Republican. It seems they are.

I remember seeing this sort of thing when President Richard Nixon was in office, though certainly not to this degree. I saw this same sort of hate for Presidents Ronald Reagan, George H. W. Bush, and George W. Bush. But no, I've never seen this type of venomous deep seated hatred on the part of some Democrats for a Republican President as I now see directed toward President Donald Trump.

I'm not kidding about a history of hate, the Democrat Party created the KKK, they created segregation, and Jim Crow laws. They opposed Women's Rights and they filibustered the 1964 Civil Rights Act. They have supported Communism, Socialism, and Dictatorships.

Today they fund ANTIFA, and it wasn't that long ago when Democrat President Obama invited the hate group Black Lives Matter to the White House. Remember how the Obama administration brushed aside the Black Panther Party thugs who were threatening White voters at polling places with clubs.

And please, let's not forget how some Democrats have openly called for the assassination of President Donald Trump since he was elected in November of 2016. Yes, with absolutely no repercussions for doing something so criminal as to incite the murder of the President of the United States.

By the way, these are facts. Our knowing these facts has made it so that none of us should be surprised at how low Democrats will go. There are some Democrats out there who are still angry about the 2016 Presidential Election. Of course they are constantly fueled by the rancor that has come from Hillary Clinton since she lost last November. She is on television all of the time these days spewing hate for President Trump.

And let's not even talk about the late night talk shows that were once watched by millions of Americans because they were funny, they're not these days. Almost every channel is a hate Trump fest. And sadly, their material has gotten very old. Then again, more sadly is their claims that they don't care if Conservatives, Republicans, and specifically Trump supporters watch their show.

Some like the jerks in Hollywood and in the music business have actually told Trump voters that they aren't allowed at their concerts or to their movies. Imagine if a Republican entertainer told Democrats, and specifically Hillary Clinton voters, not to watch their movies or go to their concerts.

Really, only Democrats hate like that. And yes, it is selective hate.

Remember when Democrat women marched in a protest against President Trump. They were joined by all sorts of Hollywood millionaire actresses who condemned the president for things that he said over a decade ago in his private life. You remember how they dressed with pink hats and dressed as giant vaginas.

Well, where were those women dressed as giant vaginas when Democrat President Bill Clinton sexually assaulted a number of women in the White House? Not something simply said, but physically assaulted women by grabbing and groping them. There was no outrage from Democrats who were supposedly defenders of women. They were silent and still call Bill Clinton the best President they'd ever had.

And how about this big time Hollywood Democrat political donor who sexually assaulted a great many of those women who protested President Trump, but remained silent about one of their own who actually sexually assaulted, raped, and threatened many of those same pink hat wearing actress? Where are those actress with pink hats protesting "one of their own"? Hypocrites. They're just hypocrites.

And by the way, President Trump does not have an "Enemies List" like Richard Nixon did. But President Obama had an "Enemies List," no different than Nixon did. So really, where was the hate for Obama's illegal activities while he was in office. Yes, things like gun smuggling assault weapons into Mexico which no one ever answered for, what about that? And how about Obama violating the Constitution by enacting laws while bypassing Congress?

Why wasn't the Left angry as Hell about that? They weren't, instead they excused Obama's lawless behavior and were silent about what was taking place, probably out of fear that they better shut up. We forget that everyone who disagreed with Obama was called a "racist." Obama could have burned the Constitution and those of us will to point that out would have surely been called "racist."

Obama acted as though he wanted to be a Dictator. He did that by way if edicts and bypassing the legislative process. Trump has not. The only thing Trump has done by Executive Order was rid America of regulations and programs illegally signed into law by Obama.

President Trump cannot find it in himself to hate an entire segment of the American population, but Obama did by hating Republicans, Whites, Conservatives, Christians, and others on his "Enemies List." Obama's own Chief of Staff Rahm Emanuel once said, "Fuck Republicans" when it came to working with Republicans over Health Care. I believe Rahm Emanuel was just echoing the sentiment of Obama himself.

Can anyone imagine the uproar if President Trump's Chief of Staff would say "Fuck Democrats"? All Hell would break loose. Of course nothing of the sort took place when Rahm Emanuel said it because the Democrat Party is in collusion with the Mainstream News Media. They gave Obama a pass on that, the same way they covered for him the whole 8 years while Obama was in office. Democrats were not angry about that, because they see Democrats acting badly as being OK.

While President Trump has tried to reunite our nation, and really return us to the days of a color-blind society which we had before Obama took office, Obama worked every angle and "didn't let any tragedy go by" to divide our nation on all sorts of levels, economically, socially, by religion, and by race. No outrage from the Democrats over that. And frankly, there are too many example of selective anger from Democrats to mention here.

So why are they so angry? Why do they hate us?

Well, I believe Democrats are angry because they are not in control of the government which they used against our own citizens. They seem to believe making others the focus of their hate is how they think they will regain power. Yes, the same way Nazis in Germany gained power and sought control over the German people in the 1930's. The Nazis blamed the Jews for all of their problems. The Democrats are blaming Trump voters and trying to paint us as being the problem with America, all because we don't want Socialism, Communism, government controlling our lives. They hate us for making America great.

Sadly, there are Democrats who hate for the sake of hating. They live on hate like a heroine addict lives for that fix. Sad, but that's what I've seen over the years.

And sadly, there are some Democrats out their that truly believe setting race against race, as well as class warfare, is the way to regain power and exert control over the American people. Not through tolerance or understanding, not through civility and kindness, and certainly not through an exchange of ideas as President Trump is trying to do, but through intimidation and hate.

The hypocrisy from some of the Democrats is incredible. Americans didn't care if Obama was black, half black, or from Chicago. Most Americans hated his economic, social, military, foreign, and domestic policies. I hated his attempts to kill American oil and coal production, his reducing our military, sending American jobs overseas, catering to hate groups, and divisiveness. Because I hated his policies, I was called a "racist." Not an angry Republican, or a pissed off Conservative, or a discontented believer in the Constitution, but a "racist" in an effort to silence my disdain for his policies. Policies that hurt America.

I believe the majority of Democrats today hate Trump, not for his policies as I don't think they can honestly tell you what they are, but because he is a Republican, White, Christian, Conservative, believer in our Constitution and the law of the land. They hate him viscerally. They hate him in the very same way they hate others who are not like them. They hate emotionally, pathologically, for no rhyme or reason. They hate senselessly. And the fact is, when confronted, they really can't even give us plausible reasons, other than Democrat Party talking points, as to why they hate Trump or us.

A recent report in the last few days came out of NBC News saying that our enemy North Korea has military officers who enjoy watching MSNBC's "Morning Joe." Yes, all because those North Korean officers enjoy watching Democrats hate President Donald Trump as much as they do.

Probably so, and that's just the way I see it.