The NFL Is A Disgrace 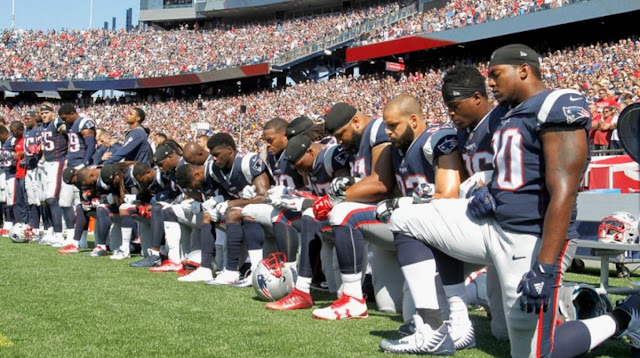 As we all have found out last year, former San Francisco 49ers quarterback Colin Kaepernick hates America. He proved that to everyone when he refused to stand and give proper respect to our flag and our nation during the playing of "The Star-Spangled Banner"when he was being paid millions of dollars to play football.

He said his kneeling during our National Anthem was his way bringing attention to what he called social injustice toward Black Americans. Specifically, his protest was in line with the Black Lives Matter propaganda that says America's law enforcement purposely mistreats Blacks because of their race.

Of course he never mentioned weather those trying to kill a police officer were shot and killed BECAUSE they were trying to kill a police officer. Then again maybe he was too stupid or simply too ignorant to understand the reality of the world we live in. Maybe he is either too dumb or too naive to understand the basics of our civilization. Maybe he it to out of touch with reality because of his being pampered in life. Maybe he is to out of touch because he made millions of dollars while playing a game. Maybe he is incapable of understanding that when one breaks the law, there are consequences no matter what height, weight, sex, color, or race you are.

This year, a great number of NFL players have picked up where Kaepernick left off. This year, it is believed that 1 in 8 NFL players disrespectfully kneels instead of stands respectfully when America's National Anthem has been played in stadiums across our country.

And yes, as I see it, those who are kneeling are proving to the world that they are truly classless ingrates, nothing but a bunch of spoiled millionaires who would probably have nothing if it weren't for the opportunities that our great nation as afforded them.

They are probably too dumb to understand that they have reached the pinnacle of their sport here in America and would never been able to do such a thing in any other nation but America. Yes, if for any other reason the simple fact that we are the only nation that plays football. They were given the opportunity to strive to be the best and become professionals at what they do. They were given that chance here, yet they don't have the smallest bit of class to stand during our National Anthem as say "Thanks." Yes, ingrates. Nothing but ingrates.

During a speech at a rally in Alabama on September 22nd, President Trump called for NFL owners to fire their players if they engaged in such disrespectful conduct. Challenging the NFL owners, he told the crowd at the rally, "Wouldn't you love to see one of these NFL owners, when somebody disrespects our flag, to say, ‘Get that son of a bitch off the field right now. Out! He’s fired. He’s fired!'"


Frankly, when I heard President Trump say that, I felt he was talking to me. I would love to see one of the NFL owners say, "Get that son of a bitch off the field right now. He's fired" when they see a player disrespecting our flag,

Yes, a large number of polls show that the vast majority of Americans believe the NFL player protest as being done by a bunch of ingrates, believe that the players as nothing but a bunch of pampered millionaires, beleive that they are only doing this because they are a bunch of no class wealthy ungrateful jocks who are catered to by the NFL. And yes, a vast majority of Americans believe like I do in that President Trump was speaking for all of us when he said "Get that son of a bitch off the field right now" if an owner sees one of his players disrespecting our flag.

Predictably, in the days that followed that rally, President Trump was hammered by the Liberal Media for using such language even thought they themselves have used worse language to describe how they view President Trump on any given day. And yes, this is the same Liberal Media who raved about how wonderful it was when Barack Obama invited the hate group Black Lives Matter to the White House even after knowing that they had committed racist hate crimes by beating and killing White and Hispanic Americans.

There is no difference between the NFL and ANTIFA because they both HATE America.

I believe that those NFL players who are kneeling are no different than ANTIFA, and other hate groups such as Occupy Wall Street and Black Lives Matter which are sponsored by the Democrat Party. And yes, the Liberal Media is really no different than those ingrates that are kneeling during our National Anthem. Their common denominator is their hate for America.

If the NFL players want to do something constructive, then maybe, just maybe, they'd have the cojones to take on the real issues plaguing Black Americans? Yes, not take a knee during our National Anthem to protest cops, but show that they have what it takes to speak to the real issues such as Black on Black crime which is an epidemic today. 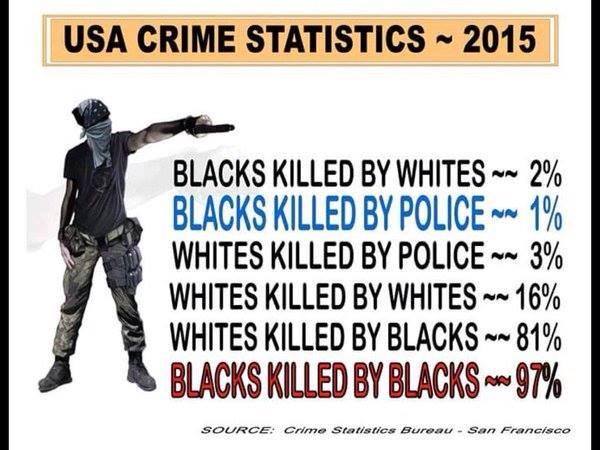 If anything, why don't these self-righteous NFL players use their wealth to speak to the Black Community as a whole about the problems that plague them?

Why no talk to their fellow Blacks about the soaring abortion rate of Black Americans, the out of this world incarceration rate of Blacks, the out of sight crime rate among Black teens, the increasing number of Black dead-beat dads? Why not talk about Blacks who use race as a way to benefit their bank accounts while stirring divisiveness and contempt?

As a result of 8 years of Barack Obama trying to divide America by race, Americans are more divided by race than we have been in the last 40 years. As for what effect the Black Community's open hatred of the police has had on their lives, the police are patrolling Black neighborhoods less than ever. Subsequently, crime in the Black Community is higher today than it's been in 10 years.

Why are the police patrolling Black neighborhoods less? For one thing, police have very little support in the Black Community. The Black Community has demonized the police to such an extent that the police rightfully fear lawsuits, ruined careers, terminations, being placed in no win situations, and even facing the possibility of being arrested for not conforming to political correctness which rules most big American cities because of Democrat mayors.

Yes, I know a few police officers who have written saying that using deadly force to safe their own lives can be the end of their career and their families financial security. One officer wrote to say, he now carries insurances to protect himself from his own department, his city administrators, the Black Community's legion of lawyers, the Federal and State governments. He said that most officers are feeling hampered and can't do their job to such an extent that they have decided patrol other sections of their cities and let the Black Community police themselves. Yes, that sounds like a no win situation.

So are ingrate NFL players trying to help out and maybe make a bad situation better? No. Instead the NFL is now inspiring Black teens and small children to do the same as they do. Around the country there are a number of school football programs that have been cancelled simply because there are coaches who approve of children want to emulate the disgraceful actions of their NFL heroes.

While the NFL is teaching a whole new generation to disrespect American traditions, our National Anthem, and our flag, the NFL and its disrespectful players are not completely getting away with this scott free. They are now realizing that actions have consequences.

For example, DirectTV announced that it would break its own rules and allow outraged fans to cancel their sports package, and get a full refund. Along with this, sponsors are withdrawing their ads, viewer ship is down, and ticket sales are down drastically. Because fans see the NFL as condoning disrespect for our flag, fans are declaring war on the NFL by hitting them right in the wallet.

The Washington Examiner has just reported that NFL ticket sales have plummeted nearly 20 percent since the start of this season. And it's not only game day ticket sales that are down as some teams are reporting that season ticket holders are not renewing. The low ticket sales combined with the fact that NFL merchandise sales are at an all time low, this proves that the American people are angry that multimillionaires are nothing but spoiled classless ingrates.

Yes, most Americans agree with President Trump that their actions should not be tolerated and they should be fired. But since it appears NFL owners support what their players are doing, fans realize that their only action is to boycott the NFL.

If the NFL thinks that we the American people will just sit by and do nothing while a bunch of spoiled rotten millionaire players through a tantrum and spit on our flag, they have another thing coming. While they think we need them, and that we everyday Americans are the all racist because we refuse to support their disrespectful conduct, they and the Left-leaning groups who are supporting them are drastically under-estimating the effect that a boycott will have.

Somehow or another, maybe it's simply because of their huge egos, the NFL believed that they can insult America, our flag, our Anthem, our Troops who are fighting right now overseas, our Veterans, our citizens as a whole. Well, we're now proving them wrong.

Tom Correa
Posted by Tom Correa at 5:08 AM