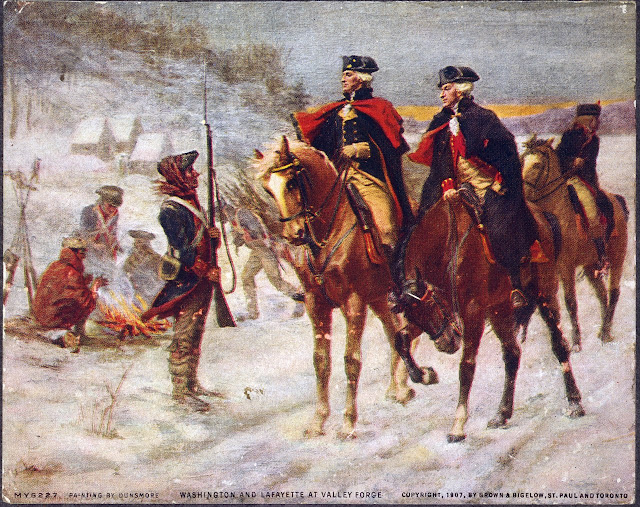 During the American Revolution, defeats were plentiful. By September of 1777, British forces captured the United States capital which was Philadelphia. After he failed to retake the city, General George Washington led his 12,000-man Army into winter quarters at Valley Forge which is located about 20 miles northwest of Philadelphia. Of course the Continental Congress had fled Philadelphia and were about one step ahead of British troops who swore an oath to hang everyone who signed the Declaration of Independence.

With a third of his 12,000 men without shoes, their feet wrapped in rags, George Washington lead his Army into Valley Forge just before Christmas in 1777. It was in Valley Forge on December 19th that the Continental Army and George Washington would change the course of history and reverse the course of the war which was not going well for America.

Upon arriving in Valley Forge, Washington ordered his men to build wood huts as shelters for the long winter months ahead. To do this, his men cleared 16 by 14 foot square dugout to build their shelters on. They dug two feet into the ground to remove the permafrost. Using logs for the walls, they also gathered stones for makeshift fire-pits that really didn't resemble fireplaces. The dirt floors of the huts were used to sleep 12 men each. With openings but no actual doors to block the freezing cold, the men attempted to keep the frigid air out with the use of blankets and canvas placed over the doors. It is believed that 1,300 to 1,600 huts were constructed.

In 1777, the Continental Congress was seen as making all sorts of empty promises when it came to supporting the Continental Army. Support for General Washington had dwindled in Congress after a series of brutal losses that year. So much so that Congress reorganized the Board of War and stripped the Commander in Chief of some of his authority.

And while this was going on, Washington's Army lacked equipment. But worse, thanks to an indecisive Congress, the American Army was starving. It was a miserably desperate situation for General Washington. While battling the British, he was also fighting Congress, His men went hungry as promised food provisions were withheld. Knowing that Congress may let them starve before acting, Washington's men competed with the British while foraging for wild game. Of course, because of they were competing for what game was available, soon game too became scarce.

Washington used Valley Forge as a defensive position to re-group, train, and reorganize his units. It was also a place from which he was able to keep an eye on British troops. That was the number one reason that Valley Forge was selected by Washington as a place to winter his Army.

It's said that Congress either didn't care about the situation taking place at Valley Forge, or simply thought that Washington was exaggerating the horrible conditions. Fact is, what took place there was horrible indeed. Washington's men were starving, malnourished, battle weary, discouraged, and feeling betrayed by Congress.

As General Washington saw things unfold and get worse, some say that during the Christmas of 1777 that he became despondent over their fate. I really believe that those who say such things really don't understand who Washington was a man. They don't understand what sustained him through the hardest of times. He was deeply spiritual, and his faith gave him strength. 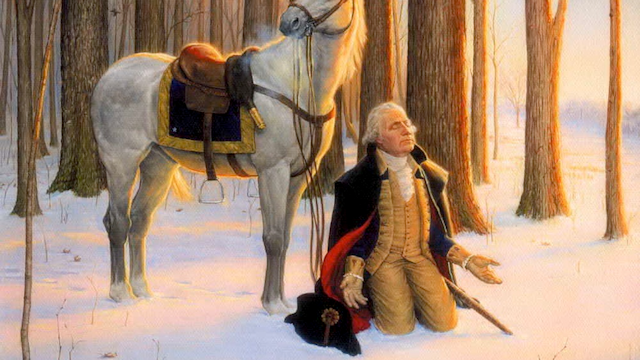 The story goes that while Isaac Potts was initially a British loyalist because he had felt that the British were simply too strong a power to go up against, his opinion changed after observing Washington and the other officers train the troops there. And among other things, Potts saw that Washington was a religious man, a good Christian.

Potts supposedly later recalled, "It was a most distressing time of the war. All were giving up the ship but that great and good man. In that woods, I heard a plaintive sound, as of a man at prayer. I tied my horse to a sapling and went quietly into the woods and to my astonishment I saw the great George Washington on his knees alone, with his sword on one side and his cocked hat on the other. He was at prayer to the God of the Armies, beseeching to interpose with his Divine aid, as it was a crisis, and the cause of the country, of humanity and of the world. Such a prayer I never heard from the lips of man. I left him alone praying. I went home and told my wife I saw a sight and heard today what I never saw or heard before. We never though a man could be a soldier and a Christian, but if there is one in the world, it is Washington."

We are all reminded that militia were only so-so effective during the Revolutionary War. But the fact is, General Washington was not in charge of professional soldiers as was the case with the British who we were fighting. Washington's men were the militia who stepped forward to defend rights they saw as being from God and not some King atop a throne in England.

Those were American farmers, cobblers, tinkers, craftsmen, tradesmen, who left to take up arms in a cause that was new to the world. The cause of men declaring their freedom from lords and nobles. And while there were certainly those who deserted and returned home to tend to the needs of their families, others stayed the course and soldiered during the worse of circumstances that winter.

There is a story of something that took place at Valley Forge. It has to do when General Washington took pen in hand to make a plea for assistance from Congress. In his letter, he told Congress of the dire situation. Some say that letter was supposed to be his resignation. Some want to say it was when he declared the cause hopeless.

Washington supposedly wrote the following letter, "I am now convinced beyond a doubt, that unless some great and capital change suddenly takes place, this Army must inevitably be reduced to one or other of these three things. Starve – dissolve – or disperse, in order to obtain sustenance in the best manner they can. Rest assured, Sir, this is not an exaggerated picture, and that I have abundant reasons to support what I say."

It's said that he heard a commotion outside his tent while writing that letter. Without a hat or wearing his coat, he left his tent and went out to see what was taking place. It was there that he found his men huddled together around fires, all making merry as best they could for Christmas. They found game to feed on. Many saw their bounty as gifts from God. Many were right.

Washington himself wrote later that he was astonished at the level of good cheer among the men. He wrote how he joined in the fellowship and wished every man there a very Merry Christmas. And then and there, yes there in the worse conditions, on that Christmas, his men cheered, "Long live the United States! Hail to our Chief! May Liberty prevail!"

General George Washington is said to have been moved to tears. There, his men starved and wrapped in blankets with rags wrapped around their frostbitten feet, cheered him that snowy day. As he watched his men brave the elements, he asked if they had not suffered enough?

To his question, a lieutenant quickly replied, "Having come this far, we can but go the rest of the distance."

Washington was taken by the lieutenant's heartfelt response. But even more so, upon his return to his tent. When he returned to his tent, Washington was amazed to see, that in his absence from his tent when joining the others in fellowship, that some of his men gathered garlands of holly and cedar and decorated the outside of his tent.

How anyone knows what was in that letter that General Washington was supposedly writing to Congress is a bit of a mystery because it's said that he took the letter and burned it. Instead, he's said to have turned and said to his men, "May God relieve your sufferings, if the Congress will not. And a good Christmas to you!"

A historian noted that the "clouds did not part and the burdens were not lifted on that Christmas Day of 1777. But from the depths of that Christmas came a resurgence in the hope and confidence of George Washington."

At Valley Forge, Americans struggled to manage a disastrous supply crisis while retraining and reorganizing. They remained in Valley Forge from December 19, 1777 to June 19, 1778. During that time about 1,700 to 2,000 American troops died due to disease and starvation.

While it was a terrible ordeal, history shows that what took place at Valley Forge was the turning point of the American Revolution. The Christmas of 1777 was the start of an incredible story of survival, self-sacrifice, and redemption. It's said that it was during that winter, during that horrible test of endurance, that General Washington retrained but also re-inspired his men to the cause. I believe it probably worked both ways. He was probably re-inspired as well.

As Americans, besides remembering that Christ our savior is the reason for the season, we should remember the sacrifices made by our forefathers this Christmas. We should remember that our liberty is preserved because we fight for it. Ensuring our liberty and fighting for our freedoms is a cause which we should all rededicate ourselves to keeping alive.

So with that, Long live the United States! Hail to our Chief! May Liberty prevail!