It's the Cowboy Way 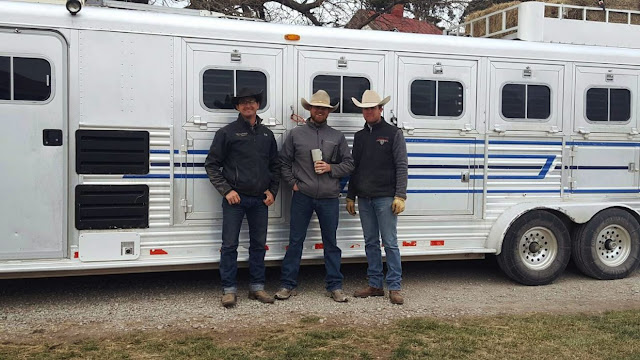 Imagine a fire that takes lives and burns over a million acres. In early 2017, fires raged through the Texas Panhandle, Kansas, and Oklahoma. About the same time that year, wildfires also ravaged parts of Colorado.

In Texas, the Texas A&M Forest Service reported that nearly 500 square miles burned to the ground in the northeast corner of the Panhandle near the Oklahoma border. At the same time, a separate fire to the south burned more than 200 square miles. And believe it or not, those two weren't the only fires being fought in Texas as a another fire to the west, near Amarillo, also took its toll on the land and the people there.

Along with thousands of head of livestock killed in those Texas fires, homes and barns were destroyed. And sadly, people were also killed. There were a few folks who died in Texas, but Oklahoma and Kansas also saw the loss of precious lives.

In the end, it was reported by the Texas Cattle Feeder's Association that more than 5,000 head of cattle were in immediate need of hay and feed supplies. As with such emergencies, thankfully an outpouring of support started and soon there were those who tried to do what they could to help buy hay for ranchers who lost pasture and were barely hanging on.

Those fires in Texas, Kansas, Oklahoma and Colorado drove thousands of Americans from their homes. And later, once a better assessment of the actual size of the fire could be made, it was found out that the fires also burned over 850,000 acres in Kansas and Oklahoma. In fact, seventy-five percent of Clark County, Kansas, a total of 461,000 acres burned that year. Frankly, it was the worse fire that most could remember as hundreds of square miles of land were simply scorched earth.


A Story That Needs Telling: Cowboys Donate A Saddle

As most who read my blog know, I tend to write more about historical events and people while trying to connect what took place and their deeds to our human nature, to what we know as "the human condition." The human condition is defined as "the characteristics, key events, and situations which compose the essentials of human existence, such as birth, growth, emotionality, aspiration, conflict, and mortality." It also speaks to our moral concerns such as the "goodness" or "rightness" of our behavior. Yes, it talks about our better Angels.

The story of what happened to Mary Kaltenbach is one that I'm hoping you'll find it as a testament to our better Angels.

Chris and Amy Potter, who work for Drummond Ranch on the Maple City, Kan. camp, were on a trip to South Dakota as the fires raged. Amy was keeping up with events on Facebook.

'What started it was I started texting with Erin Boggs,' Amy said. Erin Boggs and her husband, Austin, ranch near Ashland, Kan., which was one of the hardest hit areas. Clark County, Kansas was 75 percent incinerated, with 461,000 acres burned. The famous Gardiner Angus Ranch in Ashland was burned in that fire.

Erin was mobilizing her 4-H members to take orphaned calves for bottle feeding. She kept Amy informed on the fire's progress. The farther Chris and Amy drove, the worse the fire damage became.

'We had a lot of time to talk about it,' Amy said. 'So finally Chris said 'maybe we should go help them.' So I put on Facebook that we were thinking about doing that and it just went viral.'

Amy told neighbors and friends to drop off items at their house and barn, never thinking what that would mean. When the Potters arrived home, "we found all kinds of stuff everywhere," Amy said. A total of five pallets of milk replacer and creep feed, "and people had left bags of feed all over," Amy said. Hay, medicine, household items, food – anything someone might imagine would be needed.

Chris, a former Working Ranch Cowboy's Association Top Hand, and three friends, Lance Alcorn, Russell Powell and Connor Grokett, started planning the trip. Last week, they loaded up all the supplies, along with two new saddles bound for someone who had lost theirs.

Chris was in the middle of calving 800 Drummond cows, but he knew Amy, a former Women's Ranch Rodeo Association champion, and their kids, Colt and Carlee, could handle that for a few days.

A soft-spoken man not prone to exaggeration, Chris explained what he saw in Clark County this way, 'the death loss is pretty bad. They spent days shooting cattle that were all but dead. The fences are gone. There's some wire left, but all that will have to be torn out and rebuilt. The T-posts are left, but a lot of the braces burned. Most of these are not big herds and 80 percent of the cows were lost in many herds.

'The first thing we did when we got out there was help this couple gather what was left of their cows. We penned 28 head of 55 they had in the herd, I think, and they had to shoot about 20 of those. They had burned udders and feet falling off.'"

As the newspaper report stated, "For people who make their living tending cattle from the back of a horse, a saddle is one of their most important tools. Handmade saddles can take a lifetime to acquire – and one wildfire to lose."

Chris Potter, and friends, Lance Alcorn, Russell Powell and Connor Grokett, all went to Ashland, Kansas, to deliver the donations and lend a hand in the aftermath of the fires. With things still smoldering and folks there in a desperate situation, those four cowboys hauled needed supplies to the area. Along with the large amount of donated supplies, the cowboys took with them two saddles. Yes, all in the hope of finding a couple of people who had lost their saddles in the fire.

Both of the saddles were handmade and new, never used. One was a trophy saddle that Chris Potter won in a ranch rodeo. The other had already had a productive life, though it had never been on a horse. Amy Potter, Chris's wife, said Justin and Brooke Cargill donated that handmade saddle for Junior Ranch Rodeo Association (JRRA) members to raffle.

Amy Potter is reported to have said, "Our neighbor, Dave Harris, has given me $100 or $200 every year and told me to put it in the raffle – but he didn't want any tickets. His tack is 50 years old, so this year I wrote him some tickets." The JRRA raised $5,000 raffling the saddle.

Dave Harris won the JRRA saddle in that drawing. After Mr. Harris learned of Chris Potter's helping out and taking needed supplies to Ashland, he gave the saddle to Chris, along with $400, with a request that Chris find someone who needed that saddle more than he did. Yes, it's people like Mr. Harris that make America great.

Mary Kaltenbach and her husband Mark spent their lives building a cattle ranch in Kansas. On March 6th, 2017, devastation burned everything but their family's home.

When the four cowboys arrived in Ashland, they dropped off their load of supplies and volunteered to help in any way they could. Fate put them there to help the Kaltenbachs find what was left of their herd.

Chris Potter was reported as having said, "You know most of those people don't have big herds, but it's taken a lifetime to get them. We finally gathered up 28 cows and got them penned. I think they had to shoot 20 of them. You know that guy had worked in an implement company and had been putting his deal together, and he has just retired and was going to expand the ranch."

The fire set that plan back to square one. As stated before, the Kaltenbachs lost everything except for their the house. Of course, while there, Chris and the other cowboys learned that Mary Kaltenbach had lost her saddle. As it turned out, Mr. Harris' raffle saddle was just her size.

"We knew she wouldn't take it if we tried to give it to her outright," Chris said.

Knowing what to do, just before they left Ashland, Chris and the other cowboys put the saddle on a rack at the Kaltenback's house and left a note on it. They also left the $400, all weighed down with a T-post.

The note read, "Dear Mark and Mary, We want to thank you all for the place to eat and shower. One of our neighbors sent us this and said to find someone who could use it more than him. We want to give it to you. It seems to be the right people. Thank you all and God bless. Chris Potter, Lance Alcorn, Connor Grokett, Russell Powell." 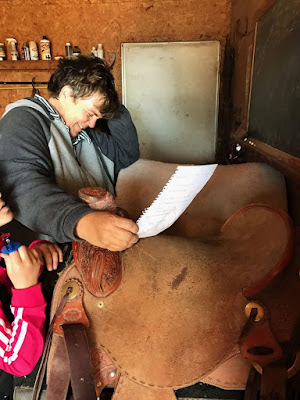 Mary Kaltenbach found the saddle left for her by those cowboys. They came to deliver supplies and helped her family. I'm thinking it meant more to her than words can describe. Four cowboys who demonstrated what our better angels are made of.

As for the other saddle, it was reported that on the return trip home, Chris had learned about a cowboy across the Oklahoma state line who had lost everything in that fire. His wife Amy is reported to have said, "We got an address and we are shipping that other saddle right to him."

The report that I read about this concluded this story better than I can, as it stated:

"Those saddles are a symbol of what members of the ranch community do for each other. First Mary's was given to a junior association who made $5,000 raffling it, then it was donated to a stranger, any stranger, who was without one and in need. The other will be a welcome surprise a cowboy would never expect, from a cowboy he doesn't know. Just two examples of how ranchers have banded together and given help in many forms to the victims of one of the largest wildfires in recent history.

Donations poured into the Potter home when people found out the cowboys were going to help fire victims, including five pallets of milk replacer and creep feed. More will be needed and it will take a long time and many dollars to rebuild, but Mary Kaltenbach will be doing it from the best seat on a horse."

Justin and Brooke Cargill, Mark and Mary Kaltenbach, are all folks who make America great. As for the Kaltenbach's, as great as their loses were, they will to come back and rebuild. That's just what they're made of. That's just who they are. As for Justin and Brooke Cargill, their gesture of donating such a saddle to the Junior Ranch Rodeo Association speaks volumes about their goodness. As for Dave Harris who saw the needs of others ahead of his need to own such a trophy saddle, how can anyone deny his good heart.

As for Chris and Amy Potter,  Lance Alcorn, Russell Powell, Connor Grokett, the proof of their good hearts come from what they did for others when it was time to do the right thing. All cowboys. All great folks. All made from the right stuff. All doing what is the cowboy way of doing things. God bless them all.